“As we head into the 2015-16 Legislative Session, the fight to restore local control to New York’s education system is far from over,” said Ra, Ranking Minority Member on the Education Committee. “I am proud to reintroduce legislation that would improve education in our state. To ensure that we are providing a world-class education for our children, we must start at the root of the problem and halt the implementation of Common Core. My colleagues and I are encouraging the new leadership of both the state Assembly and the education department to take a serious look at our proposal and move forward with measures that will allow our students and teachers to succeed.” 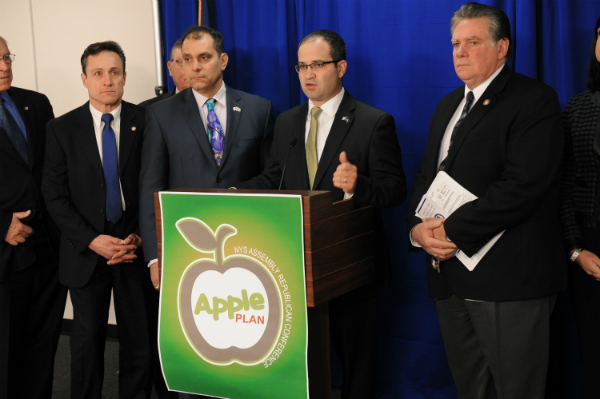 The bill (A.3656) will halt the implementation of Common Core until a Blue Ribbon Commission can hold hearings, study and make recommendations regarding education in the state. The commission will be empowered to restart the process to create a set of New York State Educational standards. Members of the Assembly Minority Conference developed solutions to fix New York’s education system by hosting 14 forums across the state. Members heard from parents, teachers, community leaders and education experts about how to address education in New York.

“Common Core Standards have brought drastic changes to our classrooms that have caused a great deal of stress for our children and educators. It needs to be fixed,” said Graf, member of the Assembly Education Committee. “Today we are reintroducing legislation that will provide a comprehensive reform package to begin solving these issues. Educating our children and providing teachers and students the opportunity to succeed in the classroom is the most important thing we can do.”