The RCPP, created under the 2014 Farm Bill that President Obama signed into law in February, authorizes $1.3 billion in spending over five years to help farmers adopt conservation practices in regions of the country facing significant environmental challenges. Officials noted that designating the Long Island Sound and Peconic Estuary as one of eight national critical designation areas would help fund agricultural conservation efforts, habitat restoration efforts and the sustainable use of soil, water and other natural resources. 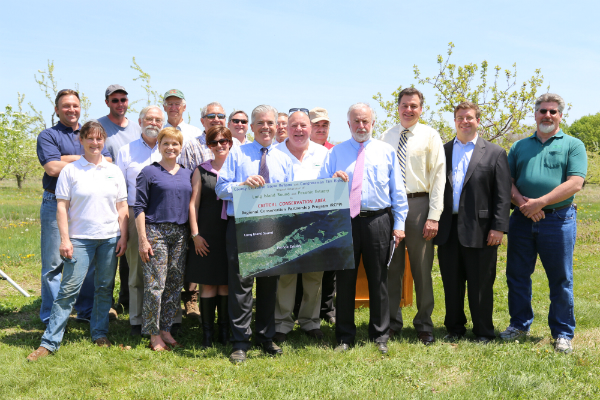 “We are perfectly situated to be designated as one of these conservation areas because we are a region that is vitally important to the future economic success of New York State,” County Executive Bellone said. “The steadfast leadership on agricultural issues from Congressman Bishop has helped to form this incredible coalition of partners who are working together and who are already committed to conservation.”

“I commend Long Island’s farm community for its leadership in adopting more environmentally-friendly farming methods to conserve water and ensure that it is suitable for drinking and basic needs,” said Congressman Tim Bishop. “It is my sincere hope that USDA will designate the Long Island Sound and the Peconic Bay watershed as a critical conservation area with federal funding to meet our water quality goals.”

“It is imperative all levels of government acknowledge the importance of agriculture, not only on the East End, but for food security for the entire region,” said Legislator Al Krupski, who represents the First Legislative District and who is also a fourth generation farmer. “Designating the Long Island Sound and the Peconic Bay Watershed as a critical conservation area will open up the funding needed to help farmers implement practices that will conserve resources, protect our environment and continue farming.”

Suffolk County farmers, with the assistance of organizations such as the National Resource Conservation Service, the Suffolk County Soil & Water Conservation District, and Cornell Cooperative Extension of Suffolk County, have already adapted a variety of environmentally sustainable agricultural practices. These include the use of controlled released fertilizers, the use of pheromones to disrupt pest mating habits, the use of bio-controls in greenhouses, no-till and low-till soil management, and other erosion control practices. Suffolk County has already permanently preserved over 10,000 acres of agricultural acreage through its Purchase of Development Rights program. This important RCPP designation could provide the funding needed to allow local farmers and supporting agencies and municipalities to scale-up these programs and other important conservation practices.

“The Long Island Farm Bureau appreciates the leadership of Sen. Gillibrand, Congressman Tim Bishop, and Suffolk County Executive Steve Bellone in working with the agricultural partners to obtain this important designation which will help towards protection and remediation of Long Island’s ground and surface water bodies,” said Joe Gergela, Executive Director, Long Island Farm Bureau. “Long Island farmers have made tremendous strides over the past 20 years in adopting the very best management practices to protect our natural assets and at the same time ensure profitability. Protection of ground and surface water is not a mutually exclusive public goal, for all Long Islanders.”

“The Long Island farm community has been progressive in reducing inputs from their operations that can negatively impact the ground water and consequently harm our bays,” said Karen Rivara, President of the Long Island Farm Bureau and member of the East Coast Shellfish Growers Association. “Our fragile and special ecosystem requires an even greater effort that will need governmental support. Oyster farming is growing in Suffolk County. We rely on a healthy ecosystem to grow our farmed shellfish. The East Coast Shellfish Growers Association members are happy to work with our fellow farmers to push for this regional designation.”

“As we look to the future of Suffolk County, two of our critical needs are strengthening our farm economy and protecting the water that surrounds and sustains us,” said David Calone, Chair, Suffolk County Planning Commission. “County Executive Bellone has pushed these items to the top of our regional agenda. Thanks to Congressman Tim Bishop, the recently enacted Farm Bill provides a powerful tool to help address both of these regional needs. The County Planning Commission joins in asking Secretary Vilsack to designate LI Sound and the Peconic Estuary as a Critical Conservation Area.”

“Sustainable Long Island has a long history of promoting the improvement of Long Island’s water quality – an objective which will be at the forefront of future initiatives should the Long Island Sound and the Peconic Estuary be designated as critical conservation areas in the RCPP,” said Amy Engel, Executive Director of Sustainable Long Island. “Long Island drinking water comes from a sole source aquifer, which means that upholding safe, clean water standards is particularly important, as runoff, dumping, inadequate waste, salt water intrusion, or storm water treatment can adversely affect the water we all depend on.”

“The Peconic Land Trust joins our legislators and partners to urge Secretary Vilsack and the USDA to identify the Long Island Sound/Peconic Bay Estuary as a critical conservation area, making it eligible for funding through the Regional Conservation Partnership Program to further assist our agricultural community in safeguarding Long Island’s water quality — vital to millions of people,” said John v.H. Halsey, President, Peconic Land Trust. “Long Island’s agricultural production is a critically important component of our economy. Funding through the RCPP will provide our farmers with funds for nutrient management plans and their implementation,”

Alison Branco, Director of the Peconic Estuary Program, stated, “We applaud our elected officials for requesting this designation. Such an investment in sustainable agriculture will allow Long Island farmers to make an essential contribution to the nitrogen load reduction needed to protect our estuaries.”

“We have assembled a very broad coalition of farmers, environmental organizations, government agencies and community groups in support of this critical designation,” said August Ruckdeschel, Farmland Administrator, Suffolk County Department of Economic Development & Planning. “We have the interest, agency, and skillset needed to scale-up environmentally-friendly practices here in Suffolk County. Now we are asking the federal government for the financial resources to do so.”

“It is so important to find federal funds to help manage the next transition for sustainable farming out here,” said Tom Wickham, owner of Wickham’s Fruit Farm. “Support through the NRCS, the Cornell Cooperative Extension, through the various places by which we have been able to make use of funding has been instrumental in allowing us to move beyond the traditional farming that I inherited some years ago and to move up to where we want to be.”