Address Highlights Water Quality & Economic Development as Priorities for the County; Bellone: We need to ‘Reclaim our Water’ together

During his address, Bellone prioritized the imperative need to focus on threats to Suffolk County’s water quality from failing septic tanks and cesspools. 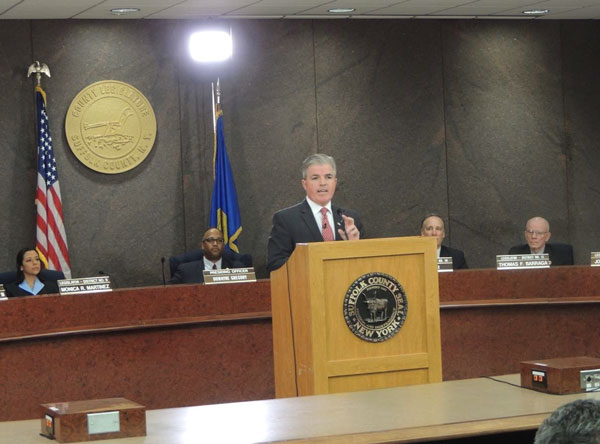 Suffolk County Executive Steve Bellone delivered his third State of the County address to a packed room at the William H. Rodgers Legislative Building in Hauppauge.

“There is no greater challenge to our future than the water quality crisis that we must now begin to confront as a County. Nitrogen poisoning of our surface and ground waters is the greatest crisis this County has faced in a generation,” said County Executive Bellone. “Clean water should be the birthright of every Long Islander, and it’s time we tackle this crisis together and Reclaim Our Water.”

Bellone cited nitrogen pollution as “public water enemy #1”, the effects of which have damaged coastal wetlands – the last line of defense against massive weather systems like Superstorm Sandy.

“In the wake of Sandy, we understand that pollution into the Great South Bay, which primarily enters through river corridors, has eroded our coastal defenses and left us more vulnerable to storm damage,” said Bellone. “Rebuilding these coastal defenses, in addition to the important work we must undertake to secure our barrier islands through the Fire Island to Montauk Point Reformulation Plan is critical to protecting our communities. Every level of government must come together to rebuild the dunes on Fire Island as quickly as possible.”

Bellone stated, “Based on scientific research and Governor Cuomo’s NYS 2100 Commission, we know that tidal wetlands play a critical role in slowing waves and protecting communities from storm damage. Yet in the Great South Bay, we have lost most of our natural defenses and sustained nitrogen pollution means that we are unable to rebuild them. Studies show that we lost approximately half the wetlands in the Great South Bay between 1954 and 2001 and conditions have only worsened since then.”

In order to rebuild coastal protections and rebuild wetlands, experts state strides to reduce nitrogen, which flows each day into the Great South Bay, must be undertaken. The County is currently developing a comprehensive plan to expand sewering which will directly reduce the nitrogen pollution in our waterways.

Bellone outlined a number of concrete steps the County will take to address the water quality crisis:

“This is a year of action for our water,” stated County Executive Bellone. “By the end of this year, we will have firmly identified the scope of the problem, begun work to sewer critical areas, have a clear roadmap as to what type of technology we need for every impacted home, and will begin to roll out technologies to place in those identified homes.”

In addition, Bellone highlighted strides made in economic development initiatives and the need to do more to reverse the Brain Drain that has plagued our region for more than 20 years.

“In Suffolk County government today the great dividing line is between those who stand for government reform and those who seek to protect the status quo,” stated Bellone.

Bellone stressed the importance of giving Suffolk County voters the right to decide whether the elected offices of Comptroller and Treasurer should be consolidated into a single elected office.

“As you can imagine, the current system is inefficient, and by consolidating these offices, we can eliminate patronage positions, make government more efficient and save taxpayer money,”

For more information and highlights of County Executive Bellone’s State of the County, logon to www.facebook.com/stevebellone or www.suffolkcountyny.gov.