(Long Island, NY) Nassau County Executive Edward P. Mangano was joined by County Legislator Rose Marie Walker, Nassau Inter-County Express (NICE) Bus President and CEO Mike Setzer, and Director of the Office for the Physically Challenged Matthew Dwyer, in honoring NICE Bus driver Jean Jeune for saving the life of a disabled passenger from a burning vehicle in Plainview. Jeune carried the passenger off the vehicle moments before it was engulfed in flames. The County Executive presented Jeune with a proclamation, and named the day in his honor. 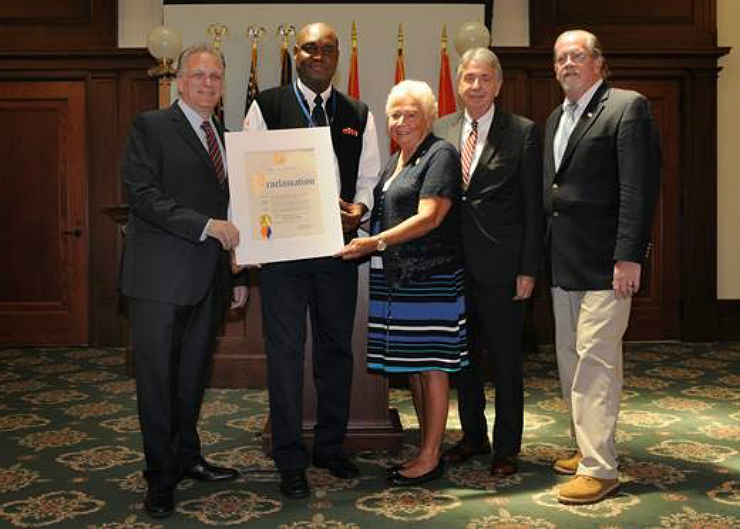 “We honor Jean as a Good Samaritan and proclaim this day in his honor,” said County Executive Mangano. “Jean used all the safety and training knowledge he learned at NICE Bus to carry out this heroic act, and we recognize the entire NICE organization for their efforts.”

Hero driver Jean Jeune, employed by NICE, was driving the disabled woman and her health care aide after a physical therapy session when an odor of smoke filled the vehicle. Flames began shooting from its engine, and he noticed that the vehicle’s wheelchair lift had lost its power. Jeune wasted no time in picking up the woman and carrying her to safety.