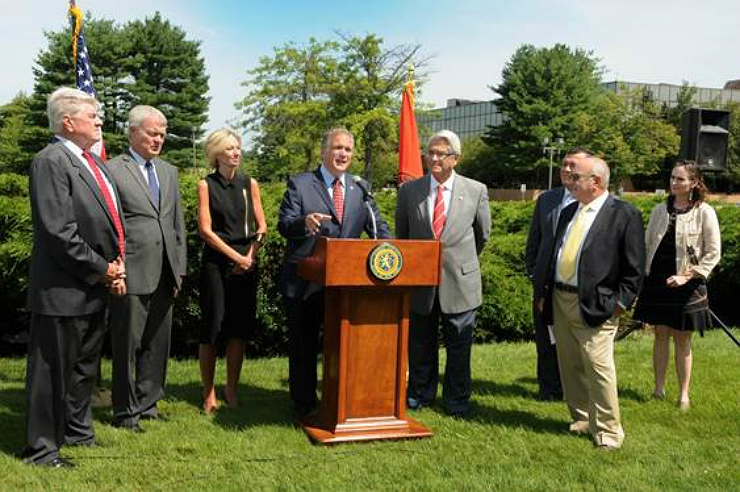 Bennett Rechler, executive vice president of The We’re Group Associates and an executive board member of the ABLI explained, “Virtually every analyst believes that in the wake of the EU vote, London will lose its ability to successfully compete as financial capital of the world. Corporations demand safety and stability and while Singapore, Hong Kong and Dubai may try to lay claim to the title, New York will clearly be the center of the economic universe. For those who want New York proximity without an exorbitant Manhattan address, Long Island is open for business.”

The County Executives’ commitment to a “London Mission”
Nassau County Executive Mangano stated “Nassau County is prepared to combine the necessary resources and incentives that would allow our development community to have a competitive edge in attracting international companies to our island. While there may be turmoil in London, there is opportunity for the bi-county region, and we intend to be agile and responsive in in seeking that opportunity.”

In a statement, Suffolk County Executive Steve Bellone said his county will work closely with Nassau County, the ABLI which spearheaded this initiative and the region’s brokerage community for the purpose of creating a “London Mission” which will create a database of potential corporations seeking to relocate to New York. The group will then cross check those opportunities with a database of existing commercial space in the bi-county area, along with properties that could be renovated or rebuilt to meet the demand.

“This year, the Suffolk County IDA, in partnership with our Office of Economic Development, ranked second in job creation in the State of New York,” Mr. Bellone said. “With today’s announcement about the formation of a public-private partnership, my administration will work alongside neighboring municipalities and ABLI’s leadership team to explore new opportunities to lure quality jobs to the region.”

ABLI President Laureen Harris, Esq. observed, “Equally important, we need to make sure the “London Mission” works closely with town governments on Long Island that control local zoning so that our region can respond quickly and affirmatively in meeting this unique opportunity.”

Consensus among many Long Island towns
Hempstead Town Supervisor Anthony Santino said, “It is believed that Winston Churchill once said, `A pessimist sees the difficulty in every opportunity; an optimist sees the opportunity in every difficulty.’ We see an opportunity here for the pragmatic and those agile enough to respond to this historic decision.”

Islip Town Supervisor Angie Carpenter stated, “I applaud the ABLI and the two county executives for advancing this regional effort to market Long Island as a potential landing place for London-based companies. Our region’s proximity to New York City, the financial capital of the world, along with our educated and professional workforce, in addition to our own commercial airport, make LI an ideal location for many companies faced with tough re-location decisions.”

In a statement Babylon Town Supervisor Richard Schaffer agreed, “Sitting here in the United States it may be difficult to offer an informed comment on the wisdom of those who voted in favor of Brexit but what is readily apparent is the need for Long Island to have a presence in London for those who seek a more predictable corporate address in the wake of that referendum. As a region we are prepared to do exactly that.”

Huntington Supervisor Frank P. Petrone’s office stated, “It only makes sense to take proactive measures that will demonstrate to those CEOs that Long Island is a more than viable option, with proximity to New York City’s financial institutions, a well-qualified workforce and affordable office space. I look forward to working with my colleagues to identify companies and reach out to them about the benefits of establishing their new headquarters here, especially in Huntington.”

The need to be coordinated, compelling and consistent
Jack O’Connor, Executive Managing Director at Newmark Grubb Knight Frank in Melville explained, Thank you County Executive Mangano, Supervisor Santino and my fellow participants in this effort. The ABLI and region’s brokerage community have been working as a unified force for decades for the purpose of attracting jobs and investment to the region.

“What this announcement that creates a `London Mission’ now adds to the equation is local government is clearly focused on what it can deliver in cooperation with the private sector for the purpose of attracting UK companies who have a reason to be concerned.

“As Bennett (Rechler) has noted, whether we capture an international company or there is a New York based company that is seeing a spike in their rent, Long Island has the means to benefit but we are engaged in a campaign that will compel us to work smarter, more closely and with a common objective. That’s a very good thing for all of us,” he concluded.

Mangano agreed that in addition to the two industrial development agencies of both counties partnering with the real estate community there will be an outreach to the state EDC and the Long Island Regional Economic Planning Council, “so we have the firepower we need to make the case that we have the means and the amenities to be a `safe haven’ for those uncomfortable with the free-fall now being experienced in the United Kingdom.”

NYC may be a haven but not a home
Rechler reminded, “This dramatic rift in the EU is going to see any number of European companies looking for premier NYC addresses. That is bound to distort city rents as supply and demand catch up to global companies now looking at New York real estate as a home. Against those economics, how does Long Island position itself to act as an attractive corporate address, offering New York City access and luxurious residential options to these London refugees?”

He concluded, “All of this would require political will, unprecedented coordination and a recognition by elected officials of what real estate developers have long known: that there is an opportunity in change if you are savvy enough to spot it and take immediate action.”