(Hauppauge, NY) Less than six months after Governor Andrew Cuomo signed into law a bill that allows municipalities to regulate pet dealers, Suffolk County has become the first municipality in New York to take advantage in what is being called a “historic vote” in New York.

This Suffolk County bill, sponsored by Legislator Jay Schneiderman (I – Montauk) and co-sponsored by Legislator William R. Spencer (D – Centerport), aims to set a “reasonable framework for pet dealers and the operation of pet stores that supplements existing state regulations and which serves to protect both consumers and the animals offered for sale,” the legislation reads, or more simply put, it would ban the worst puppy mills available to Suffolk County dealers. 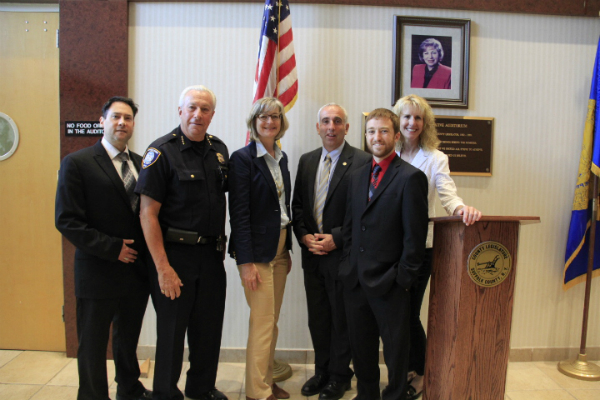 Thanking Long Island Orchestrating for Nature (LION) President and Humane Society District Leader John Di Leonardo and Vice President Julie Cappiello and the Humane Society of the United States’ New York State Director Brian Shapiro by name, among others, Legislator Schneiderman stated, “This is really an important moment in time. We would not be here without your advocacy.”

Awarded an Advocates We Love Award from the Humane Society of the United States and thanked publicly by Assembly sponsor Linda Rosenthal for their part in lobbying for the New York law that made this bill possible, Long Islanders John Di Leonardo and Julie Cappiello have been working for a long time to see this happen.

“This will be the strongest law in New York State to regulate puppy mills and Suffolk County has taken a leadership role,” stated Brian Shapiro of the Humane Society. “Many other counties and many other organizations across the state will follow suit.”

Unable to totally ban the sale of dogs and cats due to New York State law’s stipulation against banning the sale of “healthy animals,” when signed into law IR-1047 will require dealers to provide inspection reports of the breeding facilities on request and bans dealers in the county from buying animals from commercial breeding facilities that have:

“Puppy mill mothers are bred in deplorable conditions,” stated LION President and District Leader for the Humane Society of the United States John Di Leonardo at the final committee hearing on the bill. “Commercial breeding facilities often have mothers shoved in cages no larger than 6 inches their body size, often raised off the ground and caked in excrement. The most unlucky are at the bottom of the stack, with food and excrement of other animals falling through the wired bottoms. All of this is legal, but with this new law, they may have a tougher time getting into Suffolk.”

While a date is yet to be scheduled, Suffolk County Executive Steve Bellone is expected to sign this bill into law in two weeks, and Long Island Orchestrating for Nature (LION) will again be in attendance.

“This sends a message,” Legislator Schneiderman told the Suffolk Times, referring to the merchants’ point of view. “We want the public to know they’re not going to have a puppy mill dog.”