(Long Island, NY) The 4th July weekend opened with a bang at theaters with the much publicized and highly anticipated film the Devil Wear Prada premiering on June 30th the beginning of the holiday weekend. You can all go and see this wonderful film at the Regal theater now appearing in Southampton.

The movie is based on the novel written by Lauren Weisberger a former employee of Vogue Magazine. Rumor has it darlings that Meryl Streep’s Character the deliciously wicked ruthless Amanda Priestly, Runway’s vicious editor, is really Ana Winotour, Chief Editor of Vogue Magazine. In The Devil Wears Prada I was privileged to be cast as a fashionista and socialite at the Metropolitan Black and White Ball Gala Scene. The actors on the set were styled to wear tuxedos and black, white and silver designer gowns. I wore a black lace Chanel gown with my very own silver mink stole.

Unfortunately my scene is on the cutting room floor but nevertheless it was a joy to be directed by David Frankel (Sex and the City, Entourage) who by my opinion was exceedingly smart to hire one-time Carrie Bradshaw costume designer Patricia Field – it’s the outfits that are really the only competition with stunning Streep for screen time. The clothes are to die for. Every design, every accessory, every gown and every ensemble is simply divine darlings. Bill Blass, Chanel, Valentino and of course Prada are seen throughout this fashionable film. Before going on the set each actor had to be approved by costume designer and stylist Pat Field to make sure that everything was tediously perfect.

I remembered my own little stylish scenario, I had just finished with makeup and then on to wardrobe when I recalled my scene was supposed to be shot but something wasn’t quite right so the wardrobe girl anxiously took me by the hand to get the once over by Pat Field. She took one look at me and said, “Your perfect, now just take that one extra diamond necklace off, and your fine”. 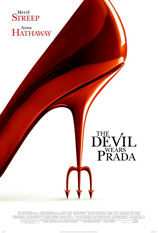 The sets are spectacular and the locations shots are amazing, New York City, Paris are some of the fashionable locations that are scene in the flick.

The premise of the film is about a young naive woman, character Andy Sachs played by doe-eyed brunette actress Anne Hathaway, comes to New York and scores a job as the assistant to one of the city’s biggest magazine editors, the ruthless and cynical Miranda Priestly. Actually Andy is really second assistant 2nd assistant to the Editor-in-Chief, Miranda Priestly (the gorgeous and stunning Streep). By second, I mean she’s gopher #2 behind Emily (a fabulously and hilarious Emily Blunt) – getting coffee, steaks, and occasionally learning how to be a fashionista. She is saved by the bell by Gay Fashion Director Nigel, played by the precious Stanley Tucci, who in my opinion simply steals the show. Tenacious Tucci delivers some really wonderful lines in the film and is very believable. His acting is really superb and the Divine Ms. Streep is perfectly cast as well.

Streep’s Miranda never raises her voice and is calm, collected and cool as ice. Joan Crawford would have been so proud. Stunning Streep portrays the perfect bitch diva boss elegantly dressed in Bill Blass and Prada shoes.
After two days of filming on the set I had the chance to meet and talk to many wonderful actors including the beautiful and stunning Stephanie Szostak who plays French character Jacqueline Follet. I also met and interviewed Actor James Cronin who plays the Ambassador. James’s character leaves his wife for the mistress (I shared a cab wit her and her husband) who he boldly brings to the Fashion Gala. James told me he was hand picked by Director David Frenkel and shares some important lines with Meryl Streep but I will never forget on the last day of shooting the gala scene Actor Tibor Feldman who plays Miranda’s boss Irv Ravitz came over to me and politely introduced himself and replied “I must tell you, out of all the actresses on the set, you have the most outrageous hair, you remind me of my glamorous platinum blond aunt at my Bar Mitzvah.”

A special Premier Screening of the film was held at the Regal Theatre in Southampton on June 24th. Celebrities that attended were Howard Stern, Mayor Julianie and Actor Stanley Tucci who all came to enjoy the film and give their support. After seeing the film, Howard Stern replied great, really great, Major Julianie expressed the acting in the film was superb and my favorite actor in the film Tucci said “Undeniably good movie, not a chick flick, not guy flick just the perfect undeniably good date movie”.

For every fashionista, I highly recommend The Devil Wears Prada. The film by far is the most entertaining sophisticated well-written comedy of the year. The Devil Wears Prada is the perfect little soufflé of fashion, fluffy, light and deliciously decadent and adorably delectable.