(Long Island, NY) Filmmakers, actors, casting agents and individuals from the entertainment industry attended the “Closing Night Party and Awards Ceremony” for the Long Island International Film Expo which took place on July 17 in Bellmore beginning with a delicious buffet in the Filmmakers Lounge from 5:00 – 6:45 P.M. Afterwards filmmakers and guests attended the Bellmore Movies for the entertainment and awards ceremony from 7:00 – 10:00 P.M. 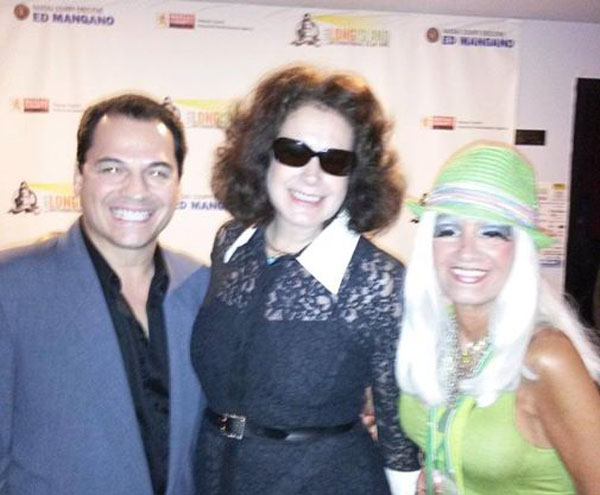 Over the course of his acting career, Actor Robert Davi has performed in more than one hundred thirty films. He has portrayed the roles of main villain and drug lord Franz Sanchez in the 1989 James Bond film “License to Kill, FBI Special Agent Bailey Malone in the NBC television series Profiler, as Vietnam veteran and Special Agent Johnson in “Die Hard,” Opera Singing Heavy Jake Fratelli in “The Goonies.” Hans Zarba in “Son of the Pink Panther” and Al Torres in “Showgirls.”

Classically trained as a recording artist and crooner, Robert Davi launched his professional singing career in 2011. His first album, Davi Sings Sinatra — On The Road To Romance, hit No. 7 on the Billboard jazz charts. Praised for his voice and vocal interpretations, Davi debuted as a headliner at The Venetian, in Las Vegas, Nevada, six months after the record was released.

Actress Sean Young attended the School of American Ballet in New York. Before becoming a movie star, Young worked as a model and dancer before becoming an actress.

The Long Island Film/TV Foundation is established to stimulate and encourage film and TV production on Long Island. Since film and activities on the Island account for over $140 million dollars in revenues per year, the foundation hopes to invite future projects to our area by working closely with industry executives, financiers, film producers, TV/Cable operators and government officials.

Young began her film career in 1980 in the film “Jane Austen in Manhattan,” followed by a role in the 1981 film “Stripes.” Later Sean portrayed the female lead, Rachael, alongside Harrison Ford in the classic science fiction film “Blade Runner” in 1982. On television in 1986, Young played the woman lead opposite Lenny Von Dohlen in “Under the Biltmore Clock,” based on F. Scott Fitzgerald’s story Myra Meets His Family. The following year, Sean Young had a small role in the film “Wall Street” as the wife of Michael Douglas’s character, Gordon Gekko. Her role was originally intended to be significantly larger, but was reduced due to a tumultuous relationship with Producer Oliver Stone.

More recently, in October 2013, Young portrayed the role of Dr. Lucien in “Star Trek: Renegades,” a fan project to create a pilot for a new Star Trek series which is scheduled for release in 2014.

The Mission of the Long Island Film/TV Foundation is to provide support and assistance to the individuals, businesses and organizations that contribute to the economic and cultural vitality of Long Island through film, television and video.