(Long Island, N. Y.) 2 Guns is yet another entry in the “buddy cop” genre…you know, two cops who hate each other are forced to team up to eradicate a common goal. Usually one cop is straight-laced and the other a “loose cannon,” but together they become an unstoppable duo and eventually they bond, learning about life, love, and shooting bad guys along the way.

However, what separates 2 Guns from the billions of other buddy cop movies is it’s leads- Denzel Washington and Mark Wahlberg. Marky Mark usually delivers the goods when the chips are down, and Denzel is, well…he’s Denzel, man! He ALWAYS delivers the goods! So, when you have two charismatic leads with decent chemistry in your film, how could you possibly go wrong?

Well, for the most part, you can’t. 2 Guns, despite the horribly generic title, is a genuinely fun and exciting flick. The plot involves Robert Trench (Washington), an undercover DEA agent, and Michael Stigman (Wahlberg), an undercover Naval Intelligence Officer, who end up working together to take down drug lord Papi Greco (Edward James Olmos). However, there’s a twist…actually, a lot of twists, as the duo (who, of course start out at odds with each other because neither man knows the other is undercover at first) end up embroiled in a scheme involving drug cartels, crooked government officials, and $43 million in stolen currency that the CIA plans to use to fund secret, ultra-naughty black ops missions. Basically everyone is trying to either kill Trench and Stigman, or coerce them into doing their dirty work, and these two bad boys will need to expend a lot of lead if they’re going to come out of the movie alive. 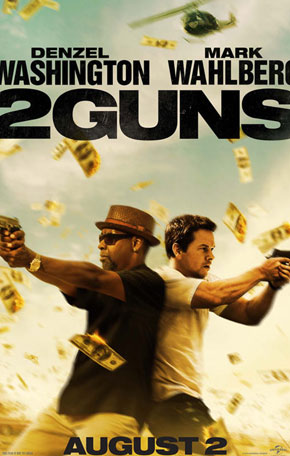 Or maybe not…maybe Trench and Stigman will have a guardian scriptwriter on their shoulders looking out for them instead. After all, the hardest thing to write in a movie are characters that do smart things, but nonetheless manage to get into trouble; it’s far easier to write stupid characters that do stupid things that get them into trouble. Case in point- 2 Guns goes out of its way to establish its bad guys as brutal and more than willing to kill anyone and everyone without a second’s hesitation- everyone except the people they should want to kill most of all, which would be Trench and Stigman. No, once they get their grubby little paws on these two, suddenly they get all reasonable and want to…talk? Even when blowing Trench and Stigman away would be in their best interests? It just makes no sense and really takes you out of a movie when you see characters doing something that no one on the planet would ever, ever do.

Otherwise, 2 Guns is a solid and fun movie. Washington and Wahlberg clearly steal the spotlight, but their supporting cast is pretty much uniformly excellent as well. Any film that gives guys like Bill Paxton, Fred Ward, and James Marsden a little exposure always gets a plus from me.

Plus, 2 Guns is fast-paced, contains sweet action scenes, and plenty of humor- much of it even funny, in fact. I’d say the first two-thirds are pretty great, but once the aforementioned lapse into stupidity on behalf of the bad guys kicks in during the film’s final third, the proceedings just kinda go down the tubes and never recovers. It’s a pity, but sticking the landing is always the hardest part of the ride, I guess. I’ve seen better movies make the same mistake, so in this case it’s not a total deal-breaker. Just be ready for it.

Overall, 2 Guns is a fun time at the movies, so if you’re in the mood for an occasionally dumb film that re-treads a tried-and-true concept with some flair and great casting, go and check it out.