(Long Island, N.Y.) It’s always a letdown when a comedy starts out great, only to take a nosedive about halfway through. Such is the case with 21 Jump Street, a film based on the old 80’s TV series about young undercover police officers that featured Johnny Depp in one of his earliest roles. Now, Depp is out (well, he does have a cameo), and in his place we have Jonah Hill and Channing Tatum, which is actually NOT the instant death you’d first expect such a pairing to be, shockingly enough.

But, despite their best efforts, Hill and Tatum can’t carry a film based on an old TV show that no one cares about, or a script as mediocre as this one gets.

Honestly, does the name “21 Jump Street” really ring any bells today? I think this rampant mining of movie and television history for film ideas is less a result of marketing executives attempting to tap into nostalgia and more just a lack of any new ideas among the collective monkeys who write scripts for Hollywood. There are so many original scripts and film treatments drifting around that don’t fit into established norms that deserve a chance, but the big studios are stuck in this rut of big stars, big bucks, and big name recognition. And this will continue until many expensive “blockbusters” take a nosedive at the box office ala Disney’s John Carter (although, honestly, that particular movie didn’t deserve the financial death it suffered). Maybe then some bigwig will get desperate enough to scale back the budgets, hire some nobodies, and take a chance on an unproven concept.

Until then, we’re getting stuff like 21 Jump Street shoved down our throats, though among the current flood of reboots/remakes it’s among the better ones…until it runs out of gas at the mid-point, that is. Acting as a continuation of the TV series as opposed to a reboot, Hill and Tatum play Morton Schmidt and Greg Jenko respectively, two rookie cops who get recruited into the revived 21 Jump Street division, which uses youthful-looking officers to infiltrate schools and whatnot.

Despite not quite passable at teens, the duo are assigned an undercover beat in the local high school, with the two posing as students in order to take down a drug ring. Morton, a brainy geek, and Greg, a dim jock, make a good pair; they’re each able to help the other out with their considerable shortcomings.

The two start making progress on their investigation, while basically breaking every rule they’re supposed to be upholding while they’re at it, including the ones regarding beating up underage kids or giving them loads of booze and weed. But hey, it’s the loose cannons who are the ones who get the results in movies like these, right? 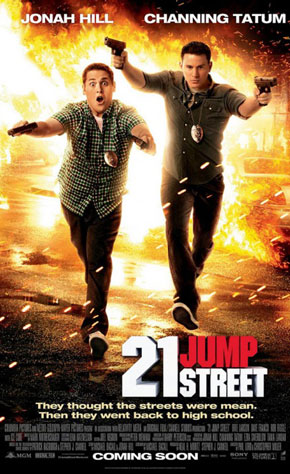 Like I said earlier in this review, 21 Jump Street is actually pretty funny at first. Once scene in particular where Greg punches out a kid who takes exception with his environmentally-unsafe, gas-guzzling muscle car almost made me spit out my Diet Coke. What made it even funnier is that Greg specially picked that car for the undercover assignment for its perceived “cool” factor- it seems that Greg is unaware of the big “green” and “anti-bullying” sentiments that have been developing in high schools in the years since he graduated. Right before blasting the kid in his face, Greg has the following exchange with him:

“How many miles to the gallon does that car get? Ten?” says the student, in horror. “SEVEN!” Greg proudly replies.

Shortly after, the kid is on the ground, and as a result, everyone in school hates Greg the bully, so it’s up to the nerdy Morton to pave the way into the graces of the popular kids. That’s a nice twist, there.

Alas, that level of humor (such as it is) slowly starts to drain away, leaving us with a film that pretty much ceases being entertaining and amusing by its final act. It’s like the writers just blew their wads early instead of spacing the humor out more evenly.

But overall, 21 Jump Street is worth a look if you’re needing a solid comedy fix. Jonah Hill is slowly branching out from his stereotypical role of a fat nerd, actually losing weight for this role and playing a THIN nerd for once. In a landscape where young actors pick one gimmick and drive it into the ground, it’s nice to see someone try and shake things up a bit. As for Channing Tatum, I’ve gone on record in previous reviews ripping into him for being quite possibly the most wooden actor in Hollywood since that magical cigar store Indian came to life in Creepshow 2. But while he will never convince me that he has what it takes to be passable even as an average actor, he DOES seem to have a knack for comedy, actually cutting loose a bit and having fun with this role. Rapper Ice Cube plays the Stupid Chief who barks orders at Hill and Tatum throughout the movie and, well…he’s Ice Cube, what do you want me to say? He might be the only actor alive who has less range than Tatum, but for what he does here, he does it well enough.

So, go and see 21 Jump Street if you’re in need of a few laughs. But if you feel the need to get up for a bathroom break halfway through, consider not going back. You’ll have better memories of the movie that way.