(Long Island, N.Y.) International Stars from around the globe dazzled New York City at the 37th International Emmy Awards on November 23, 2009. The event was held at the Hilton Hotel in Manhattan.

The International Academy of Television Arts & Sciences is a membership based organization comprised of leading media and entertainment figures from over 50 countries and 500 companies from all sectors of television including internet, mobile and technology. The Academy’s yearly schedule of events includes the prestigious International Emmy® Awards Ceremony held in New York, The International Digital Emmy® Awards at MIPTV and a series of industry events such as Academy Day, The International Emmy® World Television Festival and Panels on substantive industry topics. The Academy was chartered with a mission to recognize excellence in television produced outside of the United States and it presents The International Emmy® Awards in the following fifteen categories: Arts Programming; Best Performance by an Actress; Best Performance by an Actor; Current Affairs; Children & Young People; Comedy; Digital Program: Children & Young People; Digital Program: Fiction; Digital Program: Non-Fiction; Documentary; Drama Series; News; Non-Scripted Entertainment; Telenovela; TV Movie/Mini-Series.

This year’s event was hosted by Graham Norton. Graham is one of the best-known presenters on British television. His Channel 4 chat shows So Graham Norton and V Graham Norton became some of the channel’s highest-rated shows and picked up nearly every award going, including 4 BAFTAS. Graham then moved to the BBC where he has had a string of successful series including Strictly Dance Fever, How Do You Solve A Problem Like Maria, Any Dream Will Do and I’d Do Anything. He recently returned from Moscow after presenting the UK coverage for The Eurovision Song Contest. He has also finished a 4 month run in the West End production of La Cage Aux Folles playing the flamboyant Albin. A new series of The Graham Norton Show will start on BBC1 in the Fall.

Special Awards were presented by Ms. Barbara Walters for the Founders Award to Sir David Frost and Former Secretary of State Dr. Henry Kissenger for the Directorate Award to Professor Markus Schächter.

Dr. Henry Alfred Kissinger was sworn in on September 22, 1973, as the 56th Secretary of State, a position he held until January 20, 1977. He also served as Assistant to the President for National Security Affairs from January 20, 1969, until November 3, 1975. In July 1983 he was appointed by President Reagan to chair the National Bipartisan Commission on Central America until it ceased operation in January 1985, and from 1984-1990 he served as a member of the President’s Foreign Intelligence Advisory Board. At present, Dr. Kissinger is Chairman of Kissinger Associates, Inc., an international consulting firm. Among the awards Dr. Kissinger has received have been the Nobel Peace Prize in 1973; the Presidential Medal of Freedom (the nation’s highest civilian award) in 1977; and the Medal of Liberty (given one time to ten foreign-born American leaders) in 1986. Dr. Kissinger was born in Fuerth, Germany, came to the US in 1938 and was naturalized a US citizen in 1943. 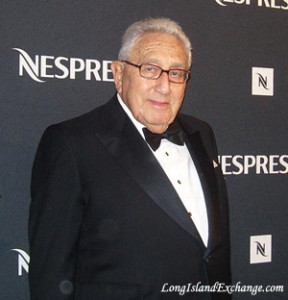 Special Awards were presented for the Founders Award to Former Secretary of State Dr. Henry Kissenger.

Barbara Walters is a world renowned journalist. Her TV career began over 3 decades ago. Barbara Walters has arguably interviewed more statesmen and stars than any other journalist in history. She joined NBC’s Today show as a writer, and within a year became a reporter-at-large, developing, writing and editing her own reports and interviews. In 1963 she became a co-host of the program without the official title, but in 1974 NBC officially designated her as the program’s first female co-host. Ms. Walters joined ABC News in 1976 as the first woman to co-host the network news, and then as co-host of 20/20 for 25 years. She has interviewed such world figures as Russia’s Boris Yeltsin, China’s Premier Jiang Zemin, Great Britain’s former Prime Minister, Margaret Thatcher, Libya’s Muammar al-Qaddafi and Iraq’s President Sadaam Hussein. She was also the first American journalist to interview Russia’s President Vladimir Putin and the first interview with President and Mrs. Bush following September 11th disaster.

“David Frost’s career started in the United Kingdom around the time Barbara Walters was starting hers, in the United States,” said Paisner. “The International Academy is delighted to bring Ms. Walters to our stage to lead this tribute to Sir David.” 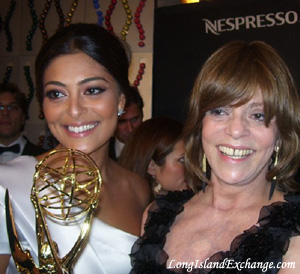 Today, Ms. Walters’ remains a co-owner, co-executive producer and co-host of The View, recipient of the 2003 Daytime Emmy Award for “Outstanding Talk Show.” Ms. Walters recently received the 2009 Lifetime Achievement Award at The News & Docs Emmys, presented by The National Academy of Television.

This years winner of the Founders Award, Sir David Frost is one of the preeminent television figures of the 20th century – not to mention the 21st! Sir David has been producing and hosting his own shows for more than 40 years and began his fourth year of hosting and producing Frost Over The World for Al Jazeera English this September. The program is received in more than 140 million homes in over 100 countries. Over the years, Frost has interviewed hundreds of celebrities and news-makers. He is the only person to have interviewed all seven British Prime Ministers serving between 1964 and 2009 and the seven US presidents in office between 1969 and 2008. His ground breaking satirical show That Was The Week That Was and its follow-up, The Frost Report, served as a launch pad for many modern British comics (including most of the cast of Monty Python’s Flying Circus) and propelled Frost into the limelight. By the end of the 1960s he was producing shows in England and the US, and enjoying as much celebrity as those he was interviewing on TV.

Professor Markus Schächter winner of this year’s Directorate award for more than twenty years has been instrumental in positioning ZDF as a leader both in the highly competitive German television market and throughout the world. He also provided leadership for ZDF’s participation in the digital transformation. Prof. Schächter’s career at ZDF (Zweites Deutsches Fernsehen) spans over 25 years, with a succession of key roles in production, programming and management. He was elected Director General by ZDF’s governing body, The Television Council, in 2002 and has since overseen the group’s operations which include the main channel and 3 special interest channels in its digital bouquet, as well as cable and satellite channels 3sat, ARTE, Kinderkanal and PHOENIX. 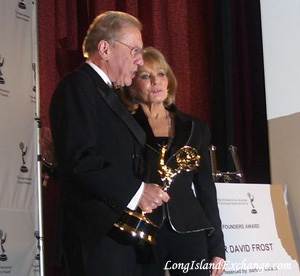 Barbara Walters presenting the Founders Award to Sir David Frost, one of the world’s most preeminent television figures of the 20th century.

This years winners for excellence in TV around the world included Winners spanning 6 countries across Europe, Asia and South America. Brazil made history by taking home their first ever International Emmy® Award for the Telenovela India-A Love Story.

Other than the performance categories, British programs also won in the Arts Programming, Children & Young People, and Documentary categories.

“We congratulate tonight’s winners for their outstanding achievements. All the nominated programs and performances are a true inspiration for all of us in the industry and for audiences worldwide,” said Academy President & CEO Bruce Paisner.

For more information go to www.iemmys.tv.