(Long Island, N. Y.) A Good Day to Die Hard? For this series, maybe. Listen, everyone loves 1988’s Die Hard and John McClane, the tough-as-nails, down on his luck, everyman police officer played by Bruce Willis who takes on a skyscraper of terrorists. 1990’s Die Hard 2: Die Harder has its detractors but I totally dig it, as McClane finds “the same thing happening to the same guy twice” as he battles an airport filled with…yup, terrorists. 1995’s Die Hard With A Vengeance in some ways may have been the high point for the series, pairing McClane with a sassy partner played by Sam Jackson as they take on a city willed with…zoo animals. No, no, just kidding…terrorists!

From there, the series seemed to go on hiatus until 2007, when Willis dusted off the McClane character in Live Free or Die Hard, where he takes on – you guessed it – terrorists! Only this time, due to the day and age, they were been updated to the cyber variety, and McClane was forced to take them on with the help of an annoying little hacker sidekick while trying to repair his relationship with his estranged daughter. It was here, unfortunately, that the Die Hard series began less resemble the bad-ass films of old and more a sad, videogame-like cash run. In the past, the character of John McClane was a plucky, never-say-die kinda guy who never let the bad guys get away with their shenanigans, always coming out on top in the end but always looking much worse for it; typically, McClane would close out the first three films covered in blood, cuts, and bruises, wearing nothing but a filthy wifebeater while lighting up a cigarette. The series up until that point was action-packed and over-the-top, to be sure, but it was always within just a hair’s breadth of reason…enough to allow you to suspend disbelief.

But with Live Free or Die Hard, despite being in his 50’s Willis as McClane was no longer an everyman. He was not a superhero, and with the bountiful aid of computers, he was suddenly doing crazy things that made even the most extreme stunts of the previous three Die Hards seem like stuff little kiddies would do in the sandbox at lunchtime, and walking away from it with nary a scratch. Even for a modern action film, Live Free or Die Hard shuffled well beyond the realm of believability, all while jettisoning the series’ trademark charisma and personality in favor of paper-thin characters you didn’t know or give a damn about and pretty, pretty explosions. I was left to wonder how this installment could have missed the mark so completely as far as what made the previous installments work so well. 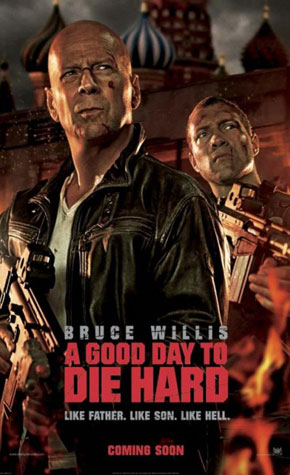 All that brings us to A Good Day to Die Hard, Willis’ latest attempt to milk the series to an unnatural death. Any hope I had about Willis realizing the mistakes made with the previous film and delivering a more grounded entry in the Die Hard series was dashed within about five minutes after the opening credits ended when Willis’ McClane, in Russia to assist his previously unmentioned, estranged CIA agent son named Jack (Jai Courtney), who has been arrested for murder, engages in a car chase/firefight that sees him flip a truck over an incoming RPG and then get hit by a car with no ill effects. In fact, he gets up, punches out the driver of the car, and then jacks the ride to continue the chase! Did I mention that Willis is now 57 years old?

The plot, such as it is, revolves around Jack’s attempts to save a political prisoner Yuri Komarov (Sebastian Koch) from corrupt Russian official Viktor Chagarin (Sergei Kolesnikov) and his henchman Alik (Radivoje Bukvic), and of course McClane gets mixed up in the middle of everything. Why are the good guys good and the bad guys bad, exactly? Nobody bothers telling us…it’s just established that way by the barely-there script that seems far more interested in getting to the next CG-stunt, explosion, or action piece than actually building upon any of the character’s relationships or histories.

In fact, the problems of Live Free or Die Hard are only magnified by this insipid sequel, whose action scenes are even more unbelievable, outlandish, and just plain un-survivable than in the previous film. McClane and his son trade lame banter that’s supposed to pass as bonding as they leap from multi-story buildings, crashing through floors and glass roofs as helicopters strafe them relentlessly, landing without any significant injury to continue the fight. The fact that Willis has said in recent interviews that he’d like to “do one more Die Hard” before finally retiring the character is just mind-boggling. I guess Die Hard 6 will have him taking on the entire Martian army with his estranged second cousin or something.

A Good Day to Die Hard is not just a terrible movie, but a waste of a once-great talent, since Willis is normally an excellent actor when he brings his A-game, which is happening less and less frequently as of late (recent exception: Looper). At least Arnold Schwarzenegger, who is also getting up there in age, is now accepting age-specific roles. Willis could learn from his example.