Once the winners of the LIIFE – Long Island International Film Expo are chosen (a combination of audience ballot and judging committee), they are honored at the Closing Night Party and Awards Ceremony, where they receive trophies and winners’ prizes (which vary from cash prizes, editing time, DVDs, free rentals of lights, etc.). The Closing Party and Awards Ceremony was held on Thursday, July 16, 2015 at the Filmmakers Lounge, directly West of the Bellmore Movies.

This year the Lifetime Achievement Award was presented to Stage, TV and Film Actor John Amos who is best known for his TV character, James Evans, Sr. on the 1970s television series “Good Times.” During the award ceremony I interviewed Mr. Amos on the red carpet. 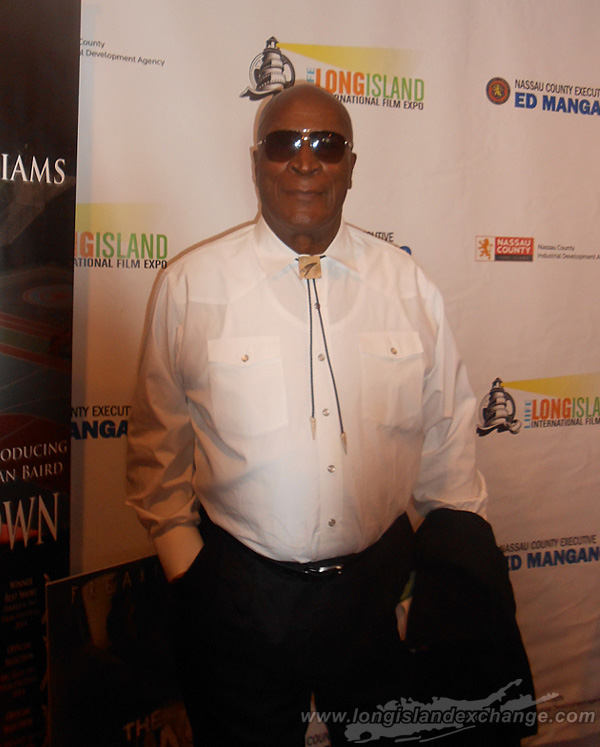 Hello darlings, I am Cognac Wellerlane and we are here at the Long Island International Film Expo and I am here with Mr. John Amos. You all know him so well. He is a fabulous Actor. He has been in so many films, on television in “Good Times” as you know from the late 70’s and also “Coming to America” with Eddie Murphy. Now you are receiving the Lifetime Achievement Award. Tell my audience what does that feel like to receive such an award? It’s pretty special!

John: Yeah, that is the one thing they usually give you before you die.

No! You have way more years!

John: No, It is very gratifying from a kid from Jersey to be here and receive a Lifetime Achievement Award. I never thought it would happen. So I am very, very grateful and thankful.

You have been an actor for many, many years. Tell my audience inspired you to become an actor? Was there a movie star or TV star that inspired you and make you say “This is what I want to do?”

John: Well the first time I received audience applause I was hooked and that happened as a result of a high school play that I was in called “The Man Who Came To Dinner” that was my first performance in high school and I got a plus and I liked it and the only other thing that I experienced as a plus was from playing football but I found acting did not leave you broken up at the end of the day or swollen so I kind of liked that better.

Tell my audience, is there any special thing that you have done, you have done so much, any particular TV show or film that you really loved doing?

John: Obviously I enjoyed performing in “Goodtimes” but I love to make people laugh and “Coming to America”….

I loved you in that!

John: Yeah, everyone seemed to love that picture because of the many roles that Eddie, he portrayed. He must have portrayed nine or ten different characters and It is one of those comedies that make people laugh. That is always a good feeling when you can make a complete audience of strangers laugh at what you are doing!

I am sure you love Eddie Murphy!

John: Oh yeah, my goodness he was at the top of his game and it was a wonderful comedy to be involved with.

Tell my audience if we want to find out more information about you as an actor, do you have a website?

John: Yeah, they can go online and check out www.johnamosactor.com

Mr. Amos’s television work includes roles in “The Mary Tyler Moore Show,” the miniseries “Roots,” for which he received an Emmy nomination, and a recurring role as Admiral Percy Fitzwallace on T”he West Wing.” He also played the father of Will Smith’s character’s girlfriend, Lisa Wilkes, in “The Fresh Prince of Bel-Air.” He has also appeared on Broadway and in numerous motion pictures in a career that spans four decades. He has received nominations for a Primetime Emmy Award and NAACP Image Award.

Amos has had roles in multiple films, such as “Coming to America,'” “Vanishing Point,” “The President’s Plane is Missing,” “Lock Up,” “American Flyers,” “The Beastmaster” and “Die Hard 2.” He starred in “Let’s Do It Again” (1975) as Kansas City Mack with Bill Cosby and Sidney Poitier. Amos was featured in Disney’s “The World’s Greatest Athlete” with Tim Conway and Jan-Michael Vincent. He was in Ice Cube’s and Dr. Dre’s video for “Natural Born Killaz” and played a police officer in “The Players Club”. Amos co-starred with Sylvester Stallone in the 1989 movie “Lock Up.” In 1995, he appeared in the film “For Better or Worse.” In 2006, he played Jud in “Dr. Dolittle 3.” He played Uncle Virgil in “My Baby’s Daddy.” In 2012, Amos had a role in the movie “Madea’s Witness Protection,” as Jake’s father.