(Long Island, N. Y.) After Earth isn’t as bad as everyone is making it out to be. That’s not to say that it’s a good movie by any means, but I’m not really buying into the mass dog-piling that seemingly every other critic on Earth is almost gleefully indulging in. You see, we critics LOVE to write reviews of bad movies, and when one comes along that is almost universally panned, we tend to feel safe; we can finally unload the big guns without fear.

Believe me, I love ripping on a bad movie as much as anyone, but in this case, I must make a stand- After Earth truly isn’t as bad as everyone is making it out to be. It’s just quite run-of-the-mill and stars a kid who can barely act, but it has some positives as well that balance out the bad. In other words, it’s just barely okay, and certainly not one of the “worst movies ever made,” as some (hell, many) people are claiming.

It’s also in vogue to rip on once-celebrated director M. Night Shyamalan, who is the director of this film, although you wouldn’t know it based on the advertising campaign; the dude is all-but absent from it. My, it’s amazing how far one’s stock can fall after a sting of critically-derided flops, huh?

We’ve been getting a lot of Sci-Fi in theaters lately, which I welcome with open arms, and usually when you combine superstar actor Will Smith with that genre…magic happens. Everyone remembers Big Willie Style fighting evil aliens Independence Day, evil robots in I, Robot, and (once again) evil aliens in Men in Black. The dude’s probably the most bankable Hollywood star going in the last two decades, as all his movies are hits thanks to his undeniable charisma and screen presence. What could possibly go wrong?

Oh yeah, he could cast his son Jaden in yet another vanity project to try and relentlessly force the kid down the collective planet’s throat as the Next Big Thing. Because that always works, right? Especially when you’re gambling something like $130 million of someone else’s dough on it?

After Earth takes place about 1,000 years after humanity has had to hightail it off of the planet and settle elsewhere after environmental destruction renders Earth all-but uninhabitable. The lamely-named Ranger Corps, a galactic peacekeeping organization commanded by General Cypher Raige (Will Smith), eventually ends up fighting with an alien species known as the S’krell and their underlings, creatures known as “Ursas” that can “sense fear.” Oh, boy.

Cypher’s kid, Kitai Raige (Jaden Smith), is your typical “disappointing son” character; he tries to follow in daddy’s footsteps (art imitating life), but was a washout at the Ranger Corps academy (and the box office, apparently) and flops out. Oh, and he blames himself after his big sister was previously killed by an Ursa. But Kitai’s mother, Faia (Sophie Okonedo), bugs Cypher to take his doofus son on his retirement voyage; the kid proves to be yet more bad luck when the ship crashes on the now-abandoned Earth, a planet that has seemingly evolved to be especially inhospitable to human beings. 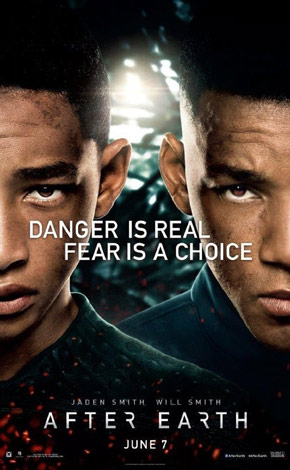 Everyone on the ship is killed except for (of course) Cypher and Kitai, but Cypher’s legs are broken and the half the ship that contains the rescue beacon that can summon help is something like 1,000 miles away. Cypher has to guide his kid via a video/audio link through the savage, mutated jungle separating them from salvation (oh, and there might be some Ursas running around too. Or whatever), but can a scrawny, annoying kid with no acting range really succeed in entertaining audiences who were falsely lead to believe by advertising that the movie they bought tickets to see would actually be headed up by Will Smith himself and not his relatively untalented son?

There’s a lot wrong with After Earth, but let’s talk about the good stuff first.

The plot, such as it is, moves along at a pretty speedy pace. There’s some okay action scenes, and the special effects work is solid.

As for the direction of M. Night Shyamalan, it’s workmanlike but unremarkable. He doesn’t really do anything wrong here; one review I read referred to him as a “hired gun” for this project, and I think that about sums it up perfectly. After getting bashed nonstop for his recent string of flops, I think Shyamalan has just finally given up and is going for the moolah wherever he can get it.

Then…we have our two leads. Will Smith turns in a surprisingly bland performance, but it’s still decent enough to get by. He’s way more restrained than usual, suggesting that he really excels more at larger-than-life roles. He also affects a southern-style accent (as does Jaden), which is pretty awkward and distracting. He’s also not present for much of the film’s running time, instead directing Jaden’s character through their com-link (which is supposed to provide the basis for some stereotypical “estranged father-son bonding” moments, but in reality it falls flat), which unfortunately robs the film of much of his cinematically-reliable presence.

But overall, Willie isn’t the problem with this movie. It’s his penchant for shoehorning his son into roles designed to catapult him into stardom without making him pay his dues.

Jaden Smith is probably a real nice kid. Unfortunately, he has none of his generous daddy’s charisma or acting abilities, and watching him barely emote while in the company of accomplished actors is bad enough; watching him do so while he’s the only one on-camera for vast portions of a film with nothing else to distract the audience from his ‘eh’-ness is another thing entirely. Plus, I just find the fact that Big Willie is pushing his undeserving child with every shred of his Hollywood muscle borderline insulting. There are actors who toil away for years to get the shot that this kid had handed to him (and is clearly fumbling).

But, considering how hard After Earth is flopping at the box office, I think most studios will think twice about handing little Jaden yet another starring vehicle, no matter who his pappy is. Sorry!

Anyway, After Earth is a barely decent movie with some okay action scenes but a terrible lead “actor.” Given that this is now the summer blockbuster season, there are many, many other, far more worthy alternatives vying for your attention in theaters. Go see one of them instead.