(Long Island, NY) In response to growing negative sentiment against Suffolk County’s infamous red light camera program, local residents  and businesses may be taking matters into their own hands in an attempt to find a way around having their vehicles identified – and fined – by the cameras.

In 2009, 50 automated red light cameras were installed in intersections throughout Suffolk County, with the idea being that motorists who flagrantly violated the law by continuing onward when the signal was against them would be caught and appropriately punished for their actions; that is, they would have their license plates photographed and would later receive an $80 fine in the mail.

On paper, it’s a solid plan – after all, countless accidents, injuries, and deaths can be attributed to people who run red lights – but some Suffolk residents started noticing that they were receiving fines issued via the red light camera system that they felt were unfair.

Some tickets were issued because a driver may have made a right on red without waiting long enough before doing so, or because a yellow light was allegedly shortened in an intersection, forcing the driver to either try and beat the red or chance setting up a rear-end collision with the car behind them by slamming on their brakes. 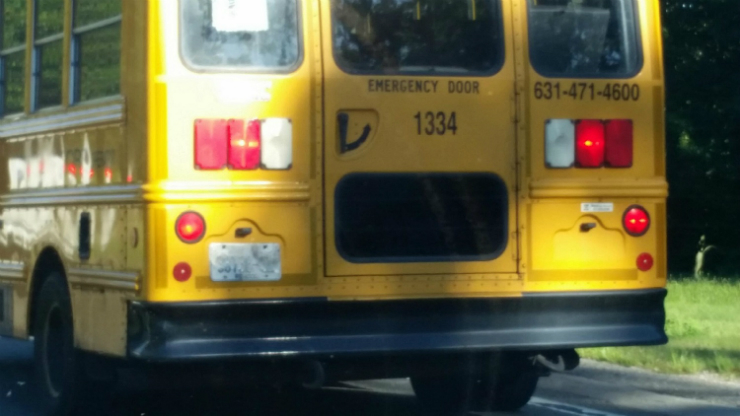 More than one bus has had its plate defaced. Photo Credit: Eric of Northport.

Soon, allegations were thrown about that the red light camera system was more a cash-grab on the part of Suffolk County then any real measure to improve safety on the roads, something that County Executive Steve Bellone and multiple Legislators – including Suffolk County Legislature Presiding Officer DuWayne Gregory (D-Amityville) and Legislator Rob Calarco (D-Patchogue) – have denied. However, some lawmakers, such as Legislator Rob Trotta (R-Fort Salonga), have come out publically against the cameras, and some residents – such as the infamous “Red Light Robin Hood” Stephen Ruth of Centereach – have claimed that the cameras are causing more accidents than they prevent.

Ruth has thus far been arrested by Suffolk authorities twice after having sabotaged numerous cameras in order to get his message out, and while his actions have not inspired any copycats as of now, it appears that some residents and businesses may be attempting to combat the cameras in a lower-profile manner.

Eric, a concerned citizen from the Northport area recently contacted LongIsland.com, having emailed us pictures of what he described as a growing phenomenon he’s noticed on Suffolk roadways in his area – vehicles, including passenger cars and even school buses, whose license plates have the appearance of having been deliberately defaced in such a way as to render them illegible, with paint seemingly stripped or scraped off of numbers and letters.

“While driving on the Northern State while about a year ago, I noticed a lot of license plates damaged. I noticed the paint was coming off, but it didn’t seem to be accidental. Just part of the plate, never the entire plate,” he said. “When I started to see it on buses and on multiple cars in parking lots, I began to get the feeling these were intentional. To date, I’ve seen this on anywhere between 50 to 100 license plates. I started taking pictures of this because it’s not right.” 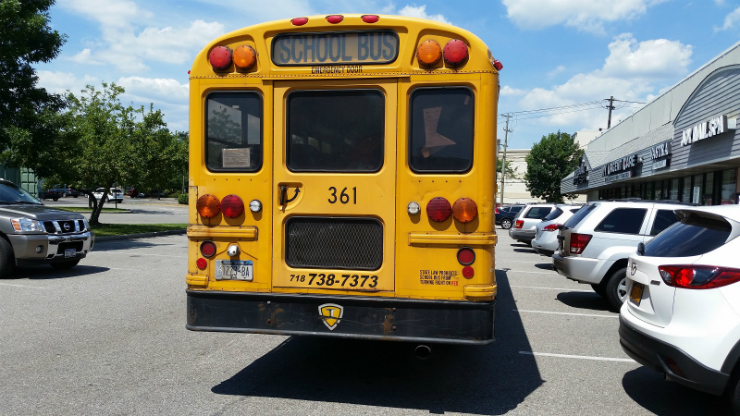 A bus with a defaced plate stops in a parking lot. Photo Credit: Eric of Northport.

Eric insists that the most obvious reason people are purported to be doing this is to worm their way out of receiving red light camera tickets; after all, if the camera can’t read a car’s license plate number, it surely can’t send that car’s owner a ticket, can they? But while admitting to not being a fan of the cameras, Eric still feels that damaging your license place opens up additional safety issues for motorists, especially if school bus companies are allowing it to transpire amongst the vehicles in their fleet.

“They are defacing their plates because of the red light cameras. There is a direct correlation. People don’t want to change their habits… they want to blow lights and not get tickets. So, people deface their plates to break the law intentionally,” he said.

“As much as I don’t like the red light cameras, they are damaging state property, the plates, and making our roads even more unsafe. If a person with a defaced license hits me or someone else and drives away, we are more likely not to get the number, and someone gets away with it. Now, the school buses are doing it. Our children are on these buses with people who do not want to follow the law. Do we want these people in charge of our children? What if there is an accident because they feel they can get away with blowing a light and then something happen with your kids on those buses?”

LongIsland.com identified two school bus companies from the pictures supplied by Eric – Acme Bus Lines and Logan Bus Company, neither of which returned phone calls for comment on the condition of the license plates on some of their school buses as of press time.

Maggie Saunders of Hauppauge noted that she’s seen several vehicles on the road in recent weeks that appeared to have been deliberately altered – all in the same exact way as described above – and said trying to beat the red light cameras – a program that she personally believes is working to help prevent road accidents – just creates more problems than it solves.

“All things being equal, people shouldn’t be blowing red lights anyway…if you’re adhering to the posted speed limit and not texting or something else you shouldn’t be doing, you should have ample time to react,” she said. “Vandalizing your own license plate isn’t helping anyone, and actually can cause problems if someone needs to identify a car that was involved in a hit-and-run or something. And I’m sure if a cop saw it, they’d give you a ticket. I’m sure there are laws that cover your plates being legible.” 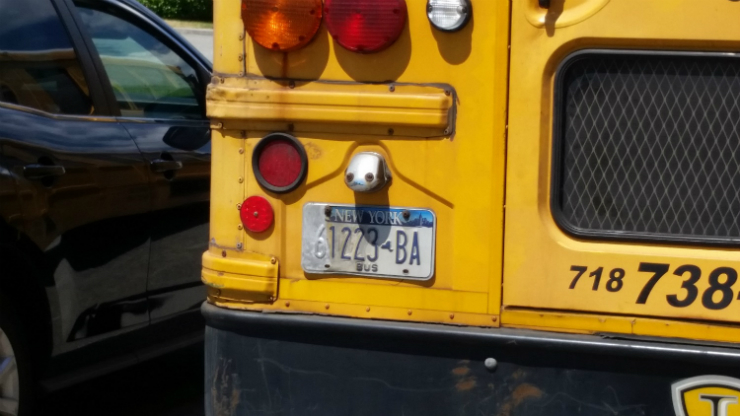 It would likely be difficult to read this plate from a distance. Photo Credit: Eric of Northport.

Saunders is actually correct. LongIsland.com spoke with Suffolk County Assistant Police Commissioner Justin S. Meyers, who confirmed that police are aware of the issue – he noted that is it only considered to be a minor problem at the moment – but stressed that any action that renders a license plate illegible, either deliberate or accidental, can get a motorist pulled over and issued a summons.

“Though it is not a prevalent issue, the methods we have encountered to obscure license plates include removing paint or utilizing black electrical tape to purposely change the appearance of the license plate digits; and placing plastic license plate covers over the plates which distort the ability to see the plate information,” he said. “Obscuring the ability to see a license plate in any manner is a violation of section 402.1b of the New York State Vehicle and Traffic Law, which is a traffic infraction. This VTL section also covers plates that are dirty or damaged to an extent where it is difficult to read the plate.”

In the meantime, if you are a motorist and are considering taking a belt sander to your license plate in order to stick it to the man, so to speak, you might want to think twice; not only are theSuffolk Police keeping an eye out for such activity, but citizens such as our tipster Eric are as well.

“As someone who shares the roads with these people, I don’t feel it is safe,” he said. “I have to point this out. Enough is enough.”