(Long Island, N.Y.) Parenting is full of hits and misses. While sometimes, I’m patting myself on the back for a job well done, other times I’m scratching my head, uncertain if I made the right decision. (I know, I know, welcome to the club.) To help take some of the guesswork out of motherhood, I caught up with Denise Schipani, author of Mean Moms Rule: Why Doing the Hard Stuff Now Creates Good Kids Later (APRIL 2012; Sourcebooks; $14.99).

In her (very relevant and useful) parenting book, she reasons that being a Mean Mom is the surest path to creating good kids, and ultimately, of course, good adults, good citizens of the world. Here, she gives one wishy-washy mom (me!) some tough love. 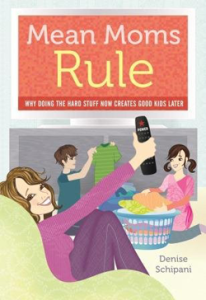 I have to admit, I’m a flip-flopper. One day, I’m as mean as The Grinch, and the next I’m all puppies and unicorns and easy-going about everything. Should I pick a side?

Schipani: You want the short answer, right? That would be yes, and your “side” should actually fall between Grinch and unicorns. The key is being consistent, because kids are geniuses at sniffing out cracks in your armor, and using your wishy-washiness to their advantage. I realize this sets it up as a parent-versus-kid battle, but in a way it is, isn’t it? You’re battling to grow them up into functioning humans; they’re battling for unfettered access to the remote control and the snack cupboard. You don’t want to be a softie parent solely to keep them from turning into TV zombies, but because if you’re too much of a pushover, they ultimately won’t respect you. Be a flip flopper too long, and when you do have to bring the hammer down, they won’t believe you, or care. And replace “you” with “their boss” and you’ll begin to see what I mean when I yammer on about taking the long view of parenting.

The caveat, and there’s always a caveat: you can still be sweet, and kind, and fun-loving without being a softie in a “please walk all over me!” t-shirt. Here’s what I mean: A wishy-washy parent pulls out her wallet whenever the ice cream truck comes along. A firm but loving parent is the one who says no to that when warranted, but who pulls the car over to the cute-looking ice cream shop for an impromptu, infrequent (but awesomely appreciated) treat. See the difference?

Being a “mean mom” is by no means the easy way. Can you give moms one of your strongest tips on how to stand your ground and not give in so easily?

Schipani: Think about the end game. It’s so, so tiring to say the same things, day in and day out, and so tempting to just pack it in and let them use their sleeves as napkins; do their book reports for them; and call their college professors to beg for a better grade (see how I progressed there? Neat, right?). If you keep your eye on the prize, it gets easier to stay strong.

Also, don’t cave out of fear, because the fear is always out of proportion to the situation at hand. Let’s say your kid is begging for the whatever-it-is that he just has to have or he will die. You fear a big to-do, worse than the tantrums you feared when he was a toddler. But if you say no (with good reason, usually) firmly and consistently, you’ll find that more often than not, what you feared (the worst day ever!) is over before you know it. That thing he had to have? Forgotten. (And if it’s not, then work out some way he can earn it!)

I’m sure former ‘softies’ are thanking you for writing this book and offering some skills on how to hang tough. What are some of the comments you have been getting from readers?

Schipani: I’m hearing very gratifying things such as, “Yes! Yes! Yes!” and “Where have you been all my life?” and “Thank you for putting into words what I’ve always instinctively felt is the right thing to do.” I feel like I’m finding my tribe, because being a mean mom is out of the mainstream. But I’m starting to think that instead of being a total anomaly, I am instead part of a silent majority. My favorite responses are those – and there are surprisingly many of them – who say that the cover and the title made their kids nervous. I mentioned kids are smart, right?

Do your kids think you’re mean?

Schipani: Why, yes, they do, and thank you very much for asking! If they’re not shooting “you’re sooooo mean” daggers at you, you’re not doing it right. My children know, down to their bones, that I am there for them. I will never let the bottom fall out of their lives if I can help it at all. But I have to be this way for them, so that they end up, hopefully, with the strength and the skills and the smarts to build their own fantastic lives. Plus, a psychic once promised me granddaughters, so I have to grow up decent men, so they can attract some awesome mates to the fold. Long view!

For more, go to www.meanmomsrule.com.