Darlings, Press Photographer Champagne Shane Gritzinger from Filmmagic.com was there to cover this impressive Hamptons event. TV Entertainment reporter sexy glamorous, Gina Glickman from News12 was on hand doing her usual intellectual interviewing for the local network and her column “Whispers” for Dans Paper. Glamorous Gina looked fetching with seductive white pants, sparkling silver lame halter-top and finally topping it off with a gorgeous Hamptons Tan. Ms. Glickman never looked lovelier as she interviewed TV Personality Ms. Behar who was complaining she is always being mistaken for The Divine Ms. M (Bette Midler). The celebrity guest at the event were all complaining about the heat that apparently my sources tell me that during the intense interview between Gina and Joy, Joy stopped and yelled out “Will someone please put the F!!!!! Air conditioner on, it’s hot as hell in here”!!! 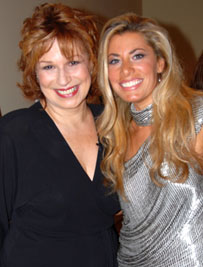 To recognize and address important issues in 1998 in the types of violence affecting families with children and adolescents the Retreat renamed their school program The Retreat’s In-School Violence Prevention Education.

To prevent ongoing violence in the homes of adolescent and children lies in the development of internal resources to protect them against violent abuse. When completing a school presentation their staff’s greatest satisfaction is knowing that they were successful in providing students with concrete information to use-if and when necessary. For more information please go to http://www.theretreatinc.org

Until my next celebrity event in the Hamptons darlings,