(Long Island, N.Y.) I hate using cliches, but every now and then nothing else will do to get my point across easily and clearly. This one has something to do with beating a dead horse. Maybe you’ve heard it used before?

Ice Age 4: Continental Drift is a computer generated cartoon that takes place during the Earth’s Ice Age (duh) and serves as the eulogy to a series that probably should have had the good sense to go out on a high note and die after its second installment. Well, I could perhaps be saying this about the third movie, but since I didn’t see it, I can’t. But if it served as a bridge from the second to the fourth, then it certainly had to be showing signs of the series heading downhill.

I actually really enjoyed the 2002 original (wow, has it really been ten years?) tale involving the unlikely team-up of a mammoth named Manny (voiced by Ray Romano), a sloth named Sid (John Leguizamo) and a saber-toothed cat named Diego (Denis Leary) and their attempts to return a human baby to the tribe of cavemen who he had been separated from.

Yeah, that sounds like a fairly lame plot, doesn’t it? 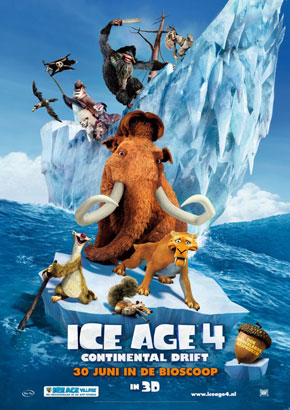 Now, I’m not saying that Ice Age 4 is bad; It’s just that it’s clearly showing that the series is running out of steam, with re-used gags and a violently strong “been there, done that” feeling prevailing throughout. The plot actually is a bitter better than it sounds, but not much. Overall, Ice Age 4 just has the feeling of a film where the producers spun a wheel marked with random plot devices and it just so happened to land on “pirates.” But…how could there be pirates when the film takes place during the aforementioned Ice Age? Wasn’t humanity depicted basically as one step up from cave men in the first movie?

Many aspects of Ice Age 4 just seem forced. Even the chemistry found between the three leads, which was charming in the first movie, seems to have faded over time. Clearly, some people rolled into the recording studio for a paycheck and nothing else, although there are some fun performances going on here at times. However, there’s enough action and things going BONK and POW to keep kids amused; unfortunately, I can’t offer adults the same degree of hope in terms of their potential entertainment. It’s a shame, since earlier entries in this series did pretty well at the occasional joke that would go over kids’ heads so mom and dad could sneak in a chuckle as well. Pixar remains the master of that particular skill, it would seem.

Another staple of the series returns in the form of a parallel storyline regarding the misadventures of a saber-toothed squirrel named Scrat who is kind of like the Trix rabbit except with acorns. It’s still cute the fourth time around, but even this act is stretching thin by now as well.

Yeah, so Ice Age 4: Continental Drift is a decent effort with occasional spurts of entertainment and humor, but overall, it’s tired. Unfortunately, I think it was number one at the box office this week, so of course film studios have probably already green-lit Ice Age 5, 6 and 7. Why couldn’t parents have taken their kids to see Spider-Man again? Oh, well.

Up next week: The Dark Knight Rises. Until then, have a swell weekend, folks.