(Long Island, N. Y.) The Conjuring is a good, scary time at the movies, and I really feel that director James Wan (creator of the Saw series, but don’t blame him for how bad those films ended up…he only made the first one) is finding his stride as a director. No, it’s not quite as good as his 2011 effort Insidious, which was really freaky and masterful, but The Conjuring is still a triumph for the horror genre in the sense that it embraces a return to old-school creeps and scares on a low budget instead of flashy CG effects and stupid false scares.

Wan is fast becoming an expert on the things that get under your skin and stay with you long after you’ve left the theater…things that remain when you’re home alone in a dark and creaky house. Ugh! And this is the same guy who will be directing the upcoming Fast and Furious 7! Honestly, that announcement surprised me, and I’m curious how such an unorthodox choice will pan out. But I have faith in Wan to craft a great film.

But let’s not get ahead of ourselves. The Conjuring is one of those movies that are “based on a true story but not really” involving real-life paranormal investigators Ed and Lorraine Warren (Patrick Wilson and Vera Farmiga) and the made-up events surrounding a supposedly legit exorcism the duo performs on a family occupying a farmhouse in Harrisville, Rhode Island, in 1971.

Long Islanders might recall that the Warrens gained fame as the lead investigators of the infamous Amityville Horror House case in 1977; Ed was a former Army vet and cop turned demonologist, and Lorraine was a psychic. The two are noted for using their abilities to travel the nation, sniffing out the truth about various supernatural phenomena, and The Conjuring centers on their second most famous case (I guess Amityville will happen in the sequel or something). 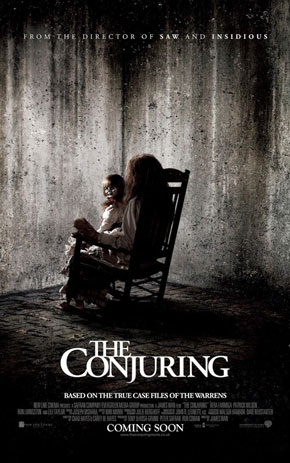 The Warrens are called to the home of Carolyn and Roger Perron (Lili Taylor and Ron Livingston…yes, the Office Space guy), who have just moved into a new farmhouse in the middle of nowhere with their five daughters and, of course, all sorts of creepy, messed-up stuff starts happening. The Warrens determine that the haunting the Perrons are experiencing is legitimate, but do they have what it takes to cleanse the demonic entities that have latched onto the innocent family, and furthermore, what will the Warrens do when these spooky denizens of the nether regions take exception to strangers butting into their business and start turning their attention upon the Warrens’ own daughter? No amount of TPS reports will save the day, I assure you.

The Conjuring, while not hitting the primal fear bulls-eye that Insidious did, still manages to be creepy as all get-out. Part of it is the expert pacing…not too fast, and not too slow, but just right to allow the sense of dread and foreboding to seep in. It’s not the most original film ever made (The Exorcist and Poltergeist both come to mind), but standard horror clichés are ignored for the most part, and when they do turn up, they are either accompanied by a clever twist, or just done so well that you really don’t care that they’re ripped off from somewhere else.

But what really makes The Conjuring work so well is the cast; informally, everyone is excellent, but while Patrick Wilson and Vera Farmiga really do shine as a couple who are struggling to deal with their unusual, otherworldly profession, what really drove home the terror were the actresses playing the five children of the Perron family. Unlike most movie kids, none of them came across as obnoxious or annoying; instead, they all felt real, and this made them far more relatable and thus, the danger they experience gets to you that much more.

Don’t get me wrong- people still do stupid horror movie things that people in real life would never, EVER do (I’m going to explore this pitch-black, mysterious, cobweb-filled cellar…by myself! In just a nightgown! With just matches to light my way!), but it’s more forgivable in this case because A) the movie is well-made, and B) it’s unrealistic to expect scriptwriters to create intelligent ways for people to get into trouble in horror movies. After all, these people only make millions of dollars, you know?

But overall, The Conjuring is a great excursion into terror and highlights the talents of a great director at the top of his game. Don’t pass it up!