(Long Island, N.Y.) Well, director Christopher Nolan‘s fascinating take on the Caped Crusader finally comes to an end with The Dark Knight Rises, the final film in the trilogy that began with Batman Begins (2005) and The Dark Knight (2008). It’s almost impossible to compare Rises to the other two films, as it was so radically different from either of them, but I felt it was a fitting end to the trilogy. It’s actually hard to believe the series is over now…in a way, I’m actually upset by the idea.

Batman is in a bad place after the events of The Dark Knight. After foiling The Joker’s (Heath Ledger) anarchistic onslaught of Gotham City and enduring the deaths of district attorney Harvey Dent (Aaron Eckhart) and his beloved Rachel Dawes (Maggie Gyllenhaal), Bruce Wayne, the Caped Crusader’s billionaire playboy alter-ego, goes into seclusion ala Howard Hughes, mentally and physically broken down.

Eight years pass, and Bruce finds himself finally lured out of his forced retirement when Gotham is threatened by a new madman in the form of the mercenary Bane (Tom Hardy), who is determined to destroy the city and everyone in it. Batman’s first confrontation with Bane goes disastrously wrong, and Wayne finds beaten down and broken. With the help of a mysterious cat burglar, Selina Kyle (Anne Hathaway), Batman must try and summon the will to rise up and save his city once again.

Overall, The Dark Knight Rises was a great movie. The stuff that went on in Gotham was straight-up crazy in this movie. The situation gets really grim, with Bane and his army essentially taking over Gotham completely and holding it hostage by means of a nuclear bomb. And while I was wondering how the heck Bane got all the money to hire enough mercs to control a major metropolitan city, I eventually suspended disbelief and just enjoyed myself. After all, it made for good drama, with Commissioner Gordon (Gary Oldman) leading an underground resistance group after Bane has established martial law. 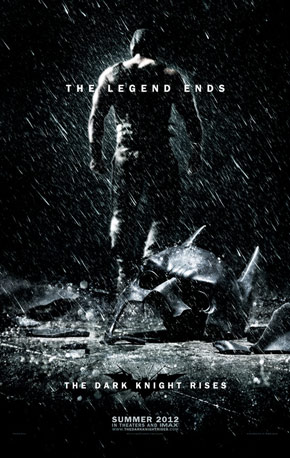 While I enjoyed The Dark Knight Rises, I believe that Nolan just tried to do way too much with the story, even within the confines of a film that was nearly 3 hours long. As a result, things get a little crowded and some storyline aspects don’t quite get the development that they should have. Nolan probably should have either simplified things a bit or made Rises into two halves like the last Harry Potter flick. You know, maybe like “Knightfall” and then “The Dark Knight Rises.” I’d have dug that. But, regardless of its flaws, the film is still amazing.

Oh, and one quick question… why does Batman still insist on using his scary Norwegian Death Metal voice on people who already know his secret identity? That’s just silly.

Christian Bale, one of our generation’s truly great actors, was great as Batman, equally handling the emotive and physically combative aspects of the role of the Caped Crusader with ease. Bruce Wayne is in a dark place in this film, and Bale manages to bring out angst and turmoil his character is consumed with while he journeys towards his destiny and redemption. But as usual, Bale the least interesting character in the movie; unfortunately, that’s the problem when your adversaries are as colorful and over the top as Batman’s.

Tom Hardy, who is quickly becoming one of my favorite actors after starring in flicks like Bronson and Warrior (but let’s not talk about Star Trek: Nemesis, please), again displays his amazing adaptability in portraying Bane, the latest bad guy facing off against Batman. Unlike The Joker, the chaotic gangster clown played by the late Heath Ledger in an iconic, Oscar-winning performance in 2008’s The Dark Knight, Bane is a methodical yet hulking behemoth of a monster who is actually capable of going toe-to-toe with Batman…and beating him. Hardy has obviously been sucking down tubs of protein powder lately, as he bulked up significantly for the role.

The intelligent and charismatic

Bane wears a bizarre mask that looks like the facehugger from Alien wrapped around his mug, and speaks in a strange accent that, thanks to some post-production audio effects, makes him sound like a cross between Darth Vader and Johann Krauss. Some people have been complaining that Bane’s voice is unintelligible, but I could understand his voice just fine; actually, I thought it was pretty awesome-sounding. Bane, as played

by Hardy was also great…he was translated from the comics well (not directly, but he fit within the

confines of Nolan’s “realistic” take on the series) and, shockingly, Hardy established such a presence on-camera that he didn’t really make me miss The Joker at all, which is perhaps the biggest possible compliment you can give him.

Anne Hathaway as Selina Kyle was good…better than I expected, actually, effectively playing a hot femme fatale-type while infusing her with a bit of humanity as well. She filled out the catsuit pretty well also, although not QUITE as well as Julie Newmar did back in the 60’s Batman TV show. Meow indeed.

The remainder of the cast – Gary Oldman, Morgan Freeman, Michael Caine, and the rest – all live up to the lofty standards set by their previous appearances in the series. And newcomers Joseph Gordon-Levitt as a Gotham City beat cop and Marion Cotillard as a potential love interest for Bruce Wayne all fit into the proceedings nicely.

There’s been a lot of talk recently about the unfortunate passing of Heath Ledger, who so masterfully played Batman’s crazed psycho arch-nemesis The Joker in The Dark Knight, and what role he could have played in this new film. While some past villains of Nolan’s series are given fun little cameos in The Dark Knight Rises, The Joker is neither seen nor even mentioned, and his complete omission apparently has some fans up in arms. But the question is, how could Joker have played a part in the movie, short of re-casting someone in the part? I think Nolan did the tasteful thing, personally, although an aside by one of the characters (“at least

that Joker character is still in jail, imagine how things would be if HE was loose too!”) would have been cool.

I do wonder how Joker would have fit into the sequel had Ledger lived. That’s something I would have LOVED to have seen. What a shame…a great talent, taken from us far too soon.

So, Christopher Nolan’s Batman trilogy is at an end, which will result in a series reboot which, in turn, is slated to pave the way for an eventual Justice League movie (DC Comics’ answer to Marvel’s The Avengers). I’m not sure how new Batman movies going forward will compare to Nolan’s films, but as far as The Dark Knight Rises goes, I was fine with how he chose to end his tale…it’s not perfect, and it falls a bit short of the high water mark set by the previous entry, but it nonetheless felt epic, appropriate, emotional, and gave closure to fans, such as myself, who have been following Nolan’s complex story since the beginning.