(Long Island, N.Y.) The Raid 2 is a great movie, to be sure. However, I found the first one (The Raid: Redemption) to be a slightly more exhilarating experience, personally; when I reviewed the 2011 original, an Indonesian martial arts action film written and directed by Welsh newcomer Gareth Evans, I called it “the best action movie I had seen in the last decade.” I still feel that way.

The original was the very definition of simple: a SWAT team takes on a building controlled by a local crime lord, fighting their way from the bottom all the way to the top, videogame-style. There was little in the way of plot or dialogue; however, where The Raid delivered was in the departments of personality and bone-crushing, mind-searing action. Featuring the grittiest, most hard-hitting and complexly choreographed fight scenes – starting first with gun-play and eventually giving away to brutal hand-to-hand combat centered on the Indonesian martial art of Pencak Silat – The Raid practically left me breathless throughout its entire running time, coming as a relief after being force-fed the limp offerings that Hollywood has been passing off as “action” for years now.

To me, the sequel really didn’t get quite to that level of pure intensity until the last 30-45 minutes or so of the movie; once the Rama/Hammer Girl/Baseball Bat Man fight starts, the flick really goes into overdrive and gets pretty crazy.

The Raid 2 picks up right where the first movie left off; Rama (Iko Uwais), one of the surviving SWAT team members from the building assault (mostly due to his superhuman martial arts skills), is recruited to go undercover into the criminal underworld to flush out corruption in the police department. He soon finds himself in deep…REALLY deep, and unable to pull out for fear of putting the lives of his family at risk. As they say, the only way out is through…and in this case, “through” means “spilling every drop of blood that can possibly be spilled.” Needless to say, lots of people are maimed and/or killed throughout the course of the movie. 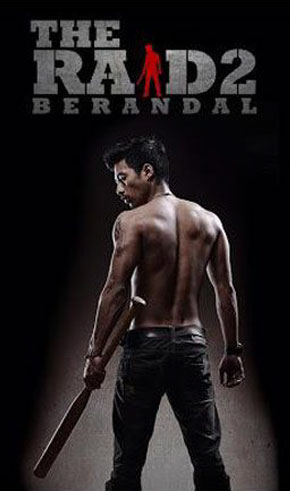 When The Raid 2 was first announced, Gareth Evans spoke extensively of expanding the bare-bones story and adding more drama and actors to the mix, which had me concerned; unfortunately, some of my fears held true when watching the final result. Adding additional story and tons of characters to The Raid 2 really only served to take away some of what made the original so damn effective as a pure, unbridled action movie; breakneck intensity and non-stop action, with a bare-bones story that served to move things along while at the same time not bogging things down. While I don’t mind the idea of a more in-depth story line, the one presented in The Raid 2 was perhaps one of the least original ever- the ol’ “guy goes undercover into the mob by going to jail and befriending the mob boss’ son after demonstrating his fighting abilities to him in a prison brawl and saving his life” kinda deal.

Still, not the end of the world – there are tons of action movies with derivative scripts – and for the most part, it’s conveyed pretty decently here, although the glut of new characters tends to make the proceedings a tad convoluted until the end, where things are tied up rather well. But overall, the story is told in an in-depth way that doesn’t really do it any favors because, at its core, it’s not very interesting; for the most part, you’re just waiting for the talking to end so you can watch the next fight.

Another issue I had with The Raid 2 were the majority of the early action scenes, which almost all for the most part involved variations of one man fighting entire gangs of people in wide-open spaces. While these fights were good, a major action movie flaw reared its ugly head in the form of gang members who politely take turns attacking the hero, one-by-one, instead of rushing him en masse. Awfully nice of them to wait until he had dispatched the guy he was fighting before having a go at him, I must say, but it really killed the realism of it. There were similar fights in the first movie, but since that flick took place in enclosed hallways for the most part, having the hero fight mostly one guy at a time worked better simply because of the lack of space. However, I do recall Rama fighting multiple guys at once – the machete fight comes to mind (he fought 4-5 guys at once with some very complex choreography), and the two-on-one final fight scene with diminutive villain Mad Dog as well, and there’s precious little of that in R2; there’s just fight after fight where one person fights gangs of killers, one at a time.

Don’t get me wrong, however; there’s A LOT to like (hell, love) about The Raid 2. There are TONS of fight scenes in the movie, and they’re all really good. The plot is paced well enough that it doesn’t make you wait too long between fight scenes, and taking the action out of the high-rise building and onto the streets (including a fairly innovative car chase scene) really keeps things fresh. The cinematography is pure art throughout, and the acting is pretty good…at least, as far as I can tell, since everyone is speaking Indonesian and Japanese; but while I’m reading the subtitles, the actors seem to be emoting in a fairly respectable way, so I’ll just assume they’re carrying their weight. Most of the new characters introduced in this installment are cool as well, and the blood/violence level is actually kicked UP a few dozen notches from the first movie, if that was possible. Brutal ain’t the word, kids.

And like I said, things get better as the film goes along, and the last third or so just goes totally berserk starting with Rama vs. Hammer Girl and Baseball Bat Man (WOW, that was good), and then goes on to an absolutely EPIC fight in a kitchen featuring some dude with knives. If the whole movie was like the last third, it would have been the greatest action film ever made, easily. These scenes got my heart pumping like most of the original Raid did for nearly its entire length.

Speaking of Hammer Girl, she’s an excellent new character played by Indonesian actress Julie Estelle…it’s just too bad she’s barely in the movie (the promotion material would lead you to believe she’s one of the stars). The awesome Yayan Ruhian, who played the very memorable character of Mad Dog in the original movie, is back, playing a different character named Prakoso; but while he’s still amazing and tough as nails, he’s not in the movie much either, sadly. Another stand-out among the massive cast was Arifin Putra, who stars as Uco, the upstart son of a wise old gangster desperate to get out from his father’s shadow.

Series lead Iko Uwais still brings the goods, displaying some fantastic martial arts skills, although his character really seems played for a chump by the detective he reports to while undercover. By the end of the movie you really wonder why he’s even bothering continuing with the assignment. The man kicks much tushy, however, so we can forgive him for being gullible. Besides, the guy’s just trying to protect his wife and kid, after all.

The Raid 2 would have been better if The Raid 1 didn’t exist, and if the media hype train wasn’t running full-speed for the sequel, building expectations for it to unobtainable levels. No, it’s not the greatest action movie ever made, but it is a DAMN good one; however, I still contend that the first Raid is the best action movie I’ve seen in the past ten years. Sometimes less IS more.