(Long Island, N. Y.) Well, The World’s End is finally here after the fine residents of Europe got to enjoy it over a full month earlier than us Yanks, and now that I’ve seen it, I have to say that I had more fun with it than with any other movie released this summer (Pacific Rim comes in second).

Sadly marking the end of the fabled Three Flavours Cornetto trilogy started in 2004 with Shaun of the Dead and continued in 2007 with Hot Fuzz, The World’s End once again pairs up actors Simon Pegg (who also co-wrote the screenplay) and Nick Frost with

director (and co-writer) Edgar Wright, this time in a sci-fi comedy that manages to be both hilarious and, at times, heartrendingly emotional

as well. It’s a masterful end to the Trilogy, but I hope it doesn’t spell the end of the ongoing collaborations between Wright, Pegg, and Frost, because whenever you get these three together…well, they make damn fine movies.

At the heart of The World’s End is the story of Gary King, a wild and hard-partying Goth kid who eventually grows up into a 40 year-old Simon Pegg; but while doing so, he never sheds any of the adolescent trappings that defined his high school glory days. Gary still wears the same clothes, listens to the same music (on the same cassette), and even drives the same car, and when the film opens, we find him pining away for the one thing that escaped the king of the party scene so many years ago- the successful completion of the so-called “Golden Mile,” a pub crawl through his hometown of Newton Haven covering 12 bars in a row; the goal is to reach The World’s End, the final bar that eluded Gary and his pals back in 1990 due to unforeseen circumstances (translation: they got too drunk to make it).

His failure to complete the Golden Mile has always haunted Gary, who has remained almost frozen in time compared to his buddies, who have all moved on, gotten married, jobs, and adult lives. Finally, Gary can take it no longer- breaking out of what appears to be a rehab facility, he rounds up the old gang (Nick Frost, Paddy Considine, Martin Freeman, and Eddie Marsan), who reluctantly agree (after a great deal of persuasion) to accompany their old leader on another go at conquering the Golden Mile. 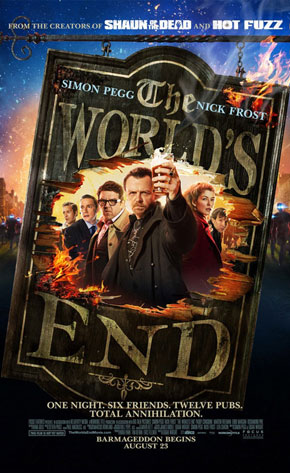 However, upon arriving in Newton Haven and starting their infamous crawl anew, the group slowly starts to realize that things aren’t quite how they remembered in their own stomping grounds; eventually, the situation escalates and Gary and his crew find themselves uncovering a conspiracy involving an Invasion of the Body Snatcher-style alien plot to replace humanity with look-alike robots. The fate of the world hangs in the balance as the key to the survival of mankind lies in Gary and his friends finishing The Golden Mile and making it to the one pub that eluded them so many years before- The World’s End.

I won’t talk too much about the details of The World’s End, as it’s best experienced going in knowing as little as possible (the trailers have spoiled enough as it is), but I will tell you that this film is pretty damn fantastic. I’m not quite sure where I would grade it compared to the other Three Flavours Cornetto trilogy installments (Cornetto is a brand of British ice cream); Shaun of the Dead and Hot Fuzz both might have been a bit funnier, but they also possessed some segments that dragged a bit, unlike The World’s End, which maintains a near-lightning pace throughout. However, the closing edition of the Trilogy also manages to tug on the heartstrings in ways that the previous films in the series didn’t quite manage…in particular is a twist involving Gary’s character that actually had me choked up a bit. Moments like these are few in The World’s End, but when they come they’re masterfully woven into the story and are genuinely touching. This is a film that truly gets you to care about its characters, which 99 percent of summer films either can’t be bothered to do; and it does this while managing to be both over-the-top and subtle at the same time, a cinematic feat that the British have seemingly mastered.

Simon Pegg really impressed the hell out of me here and easily stole the movie- his Gary is kinetic, frantic, and all over the place; an adolescent in an adult’s body, lost in the memories of days gone by. But this is tempered by some truly emotional scenes that really expressed Pegg’s surprisingly broad range as an actor. Also, Pegg’s chemistry with regular cohort Nick Frost is as intact as ever, with the two essentially switching roles from the characters they played in Shaun of the Dead; Pegg is now the aloof clown with Frost the mature one. The backing cast is just as vital to the success of The World’s End, with everyone coming together perfectly (Martin Freeman is always a hoot).

Wright’s typical energetic directing style is spot-on here, and the film manages to deftly swing from slapstick to drama

to shockingly well-choreographed fight scenes with robots that explode with sickening ease into blue goo. The story ends up going to places you would never expect, and the ending, while a downer in some respects, still manages to bring the Three Flavours Cornetto trilogy to a satisfying close.

Best movie of the summer, folks. Go out and see it now.