LONG ISLAND, NY – Bay Street Theater and Sag Harbor Center for the Arts hosted its 24th Annual Summer Gala on Saturday, July 11. Their gala is always a summer treat for Hamptonites to give their support to this amazing theater. The Bay Street theater, in association with DreamWorks Theatricals, presented a concert reading of the first act of Stephen Schwartz’s new stage adaptation of “The Prince of Egypt.”

Schwartz is a brilliant prolific composer whose accomplishment have included: “Godspell,” “Pippin,” “Wicked” and “Working.” Scott Schwartz the son of Stephen Schwartz is Bay Street’s Artistic Director and was thrilled to debut the project, which has been in the works for some time. “What’s happened is that DreamWorks has, over the years, with increasing frequency as they’ve gotten into the live theater business, gotten requests about a stage adaptation of “The Prince of Egypt” to the point that they thought it was time to make a live show,” says Schwartz. “The original movie, as with most animated features, has five or six songs, while the high teens are more common in a stage musical. I’m continuing to try and get some writing done on the new songs.”

“The Prince of Egypt” is an adaptation of the Biblical story of Moses leading the children of Israel out of Egypt and was released in 1998. This film was DreamWorks Pictures’ first traditional animated film. Many of his songs from the film became mainstream hits, including “When You Believe,” which Mariah Carey and Whitney Houston covered as a duet, as well as “River Lullaby,” covered by Amy Grant. 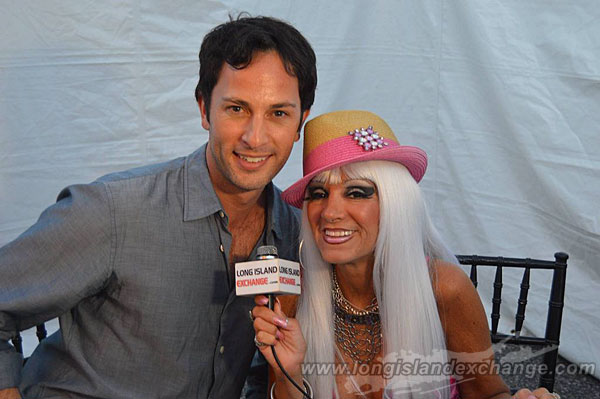 I had the pleasure of interviewing the cast that night including Matthew James Thomas (Pippin, Spider-Man: Turn Off the Dark) as Moses, Tony Award winner Patina Miller (Pippin, Sister Act, Madam Secretary) as Tzipporah, Norm Lewis (Scandal, Porgy and Bess, Phantom of the Opera) as Jethro, Julia Murney (Wicked, 30 Rock, The Wild Party) as Queen Tuya and Kyle Barisich (Phantom of the Opera, The Following) as Aaron

Last May, Norm Lewis who play “Jethro” made history as “The Phantom of the Opera’s first African American Phantom on Broadway. He was recently seen on PBS in the Live From Lincoln Center Productions of Norm Lewis: “Who Ami I?”, “New Year’s Eve: “A Gershwin Celebration” with Diane Reeves, “American Voices” with Renee Fleming and will be seen in the upcoming Live from Lincoln Center Production of “Showboat.” 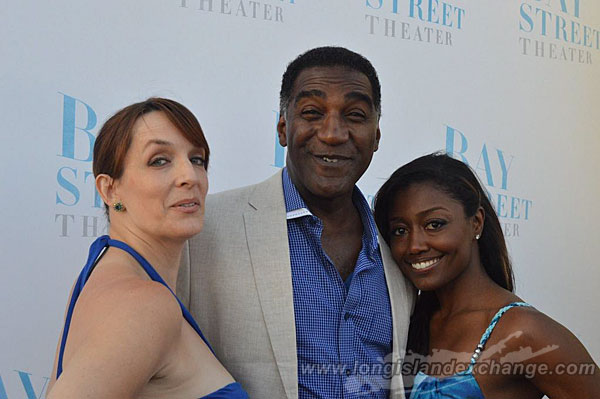 Hello darling, welcome back I am here at the 24th Annual Bay Street Gala and I am here with this Broadway Actor introduce yourself to the camera.

Norm: I am Norm Lewis

You have done so much on Broadway, what has been your latest accomplishment?

Norm: Most people know me from “Porky and Bess” and I just finished “Phantom Of The Opera” on Broadway and that was a dream.

We are here of course tonight for the Bay Street Theater. This is such a wonderful theater and it’s such a great thing that you are here tonight to support the theater.

Norm: It is an honor to be here. I have never been to the Hamptons before believe it or not. I have been in New York for over twenty years and I am glad that I had a chance to come here to do something as significant as this. I have always heard about the Bay Street theater and the wonderful shows they do, just how they treat their actors. I am honored to be here.

Patina Miller is an American actress and singer. Miller is best known for originating the role of disco diva wannabe Deloris Van Cartier in the 2009 West End and 2011 Broadway productions of “Sister Act.” She recently starred as the Leading Player in the 2013 revival of “Pippin” for which she won the Tony Award for Best Actress in a Musical.

Patina, don’t you think the Bay Street Theater is a fabulous theater?

Patina: Of course it is a fabulous theater. I love Stephen Schwartz and Scott is amazing and I think what they doing here is pretty special and I am happy to be here for this gala tonight.

Tell my audience what was it like to work with Mr. Schwartz?

Patina: Well, I mean Stephen is one of the greats and as a musical theater actress it has been very, very amzing to be able to work with him during “Pippin” you kmow him being hands on and to be here today celebrating and doing the first act of his new musical “The Prince of Egypt” it’s really amazing. Stephen is just the best of the best! We just have been having fun for the past five days!

Julia Murney is an American actress, singer and theatre performer, primarily featured in theatre and television commercial voice-overs. Until 2005, she was commonly known as the Broadway actress who had technically never appeared on Broadway. This was because her fame came mostly from her performances on the Broadway charity circuit, and not traditional Broadway productions.

Murney’s Off-Broadway theatrical credits include originating the role of ‘Queenie’ in Andrew Lippa’s “The Wild Party” (2000) at the Manhattan Theatre Club, opposite Brian d’Arcy James, Idina Menzel, and Taye Diggs, for which she was nominated for a Drama Desk Award. She was also seen in “The Vagina Monologues,” “Crimes of the Heart” (2001), “A Class Act” (2000), “Time and Again” (2001), and “First Lady Suite.” She appeared in a musical version of the film “Saved!”at the Playwrights Horizons Theatre, which had previews starting from May 9, and an opening on June 3, 2008. In August 2008, Murney portrayed the title role of Andrew Lloyd Webber’s “Evita” at Wells Fargo Pavilion in Sacramento.

Murney made her debut on Broadway in 2005, in the short-lived musical Lennon. She was also seen in the Actors’ Fund benefit concerts of “Funny Girl,” “Chess,” “Hair” and the World AIDS Day Benefit Concert “Pippin.” She has also been featured on television in “Sex and the City,” ” Ed,” “NYPD Blue” and various episodes of “Law & Order.”

Tell my audience about this play and of course the music is by Stephen Schwartz. How were you introduced to him?

Julia: I have known Stephen Schwartz since 1996. I have worked with him a number of times. I got to play the wicked witch in “Wicked” on Broadway so we have a long history.

Matthew James Thomas is a British actor and singer who has made appearances in television, film, and theater. He is known for his television roles including the BAFTA and Emmy Award-winning, “The Lost Prince” and the TV drama-musical show, “Britannia High.” Thomas is also recognized for his performance in the title role of the 2013 revival of “Pippin” which received a Tony Award for Best Revival of a Musical. He was also a late addition to the U.S. national tour of “Pippin” in 2014. He had his Broadway debut in 2010 playing Peter Parker in “Spider-Man: Turn Off the Dark.”

Now tell me, Matthew, why are you here tonight. Obviously you are here for a special reason. Tell my audience.

Matthew: We have just completed a performance of the first act of “The Prince of Egypt” which is now being turned into a musical.

And you are very excited about that!

Matthew: Hugely excited! All we did today was perform the first act and it was incredible!

Kyle Barisich who plays “Aaron” is a native of Log Gatos, California. Kyle is thrilled to baking his Bay Street Theater debut. He comes directly from the Broadway company of “The Phantom Of The Opera” where he recently played Raoul, Vicomte du Chagny.

We are here at the Bay Street Theater Gala and I am here with this wonderful Broadway actor. Eveyone loves you in the theater. You are doing such amazing work. Introduce yourself to the camera.

Kyle: Sure, my name is Kyle Barisich and I play “Aaron” in “The Prince of Egypt.”

Tell my audience what was it like to work with Stephen Schwartz.

Kyle: I come from “Phantom Of The Opera” so I me met and worked with Andrew Lloyd Webber and Stephen Schwartz. you know he is so down to earth for someone that is such a mad genius as he is. He is so approachable and down to earth and was just as excited bo bring this show tonight as we were to be a part of it and that was so exciting!

During the gala the Bay Street Theater & Sag Harbor Center for the Arts honored The Honorable Timothy Bishop and Joe Pintauro for their services to the community and to the arts.

The Honorable Timothy Bishop is a representative for New York’s 1st congressional district. Bishop served most of central and eastern Suffolk County and secured more than $150 million for projects within his district. He was widely viewed as one of the Congress’ strongest advocates for access and affordability for students pursuing Higher Education. Prior to serving in the United States Congress from 2003-2015, Bishop was an administrator at Southampton College of LIU for 29 years, the last 16 of which he spent as Provost. Recently named distinguished professor of Civic Engagement and Public Service at St. Joseph’s College, he resides in Southampton with his wife Kathy. The couple have two daughters, Molly and Meghan, and a grandson, Nathan.

Joe Pintauro is a noted playwright, poet, and novelist. His play Men’s Lives was the inaugural production of Bay Street Theater. His novels are Cold Hands and State of Grace. Joe is a recipient of the John Steinbeck Writers Award and the Guild Hall Lifetime Achievement Award for the Literary Arts. He is currently working on a third novel and just completed a new play.

Bay Street Theater & the Sag Harbor Center For The Arts is a year-round, not-for-profit professional theater and community cultural center which endeavors to innovate, educate, and entertain a diverse community through the practice of the performing arts. We serve as a social and cultural gathering place, an educational resource, and a home for a community of artists.