(Long Island, N.Y.) It’s been a long time since a film has affected me this way. It’s been over an hour since it ended and I can’t stop thinking about it. That alone is automatically worth either three stars or one star by default, depending upon how good/bad a movie it is. In the case of Black Swan, director Darren Aronofsky’s follow-up to 2008’s The Wrestler, he lands in the automatic three stars category and then some, coming just shy of my coveted four-star rating by just a hair. I seriously mean that. Black Swan is something I’m feeling in my heart and gut, like falling in love with someone who proceeds to punch you in the bread basket. It’s not exactly what you wanted, but it’s completely exhilarating nonetheless.

Black Swan is the tale of Nina Sayers (Natalie Portman), a dancer for a New York City ballet company who tirelessly chases the dream of landing the big role. The company’s director, Thomas Leroy (Vincent Cassel), is gearing up for his big production of Swan Lake, and is looking for a dancer who embodies the duality needed to portray the Swan Queen, a role made up of both the innocent White Swan and sensual Black Swan. While technically skilled and a natural for the role of White Swan, the repressed Nina lacks the raw passion needed to pull off the Black Swan, something company newcomer Lily (Mila Kunis) comes to naturally. Nonetheless, Nina surprises Leroy with some fire when she fends off his sexual advances, and lands the part.

However, while relentlessly training for the big opening night of Swan Lake with all her heart and soul, she still can’t seem to muster the sensuality needed to capture the essence of the Black Swan, much to Leroy’s frustration. Between the intense pressures of living up to her leading role, Lily’s perceived scheming to steal her part, and the control exerted by her overbearing mother (Barbara Hershey), herself a failed dancer living vicariously through her daughter, Nina’s grip on reality starts to crack and peel. She begins to discover a dark part of herself that she didn’t know was there, but will her relentless pursuit of perfection finally put her in touch with the fervor needed to nail the Black Swan, or will it destroy her utterly? 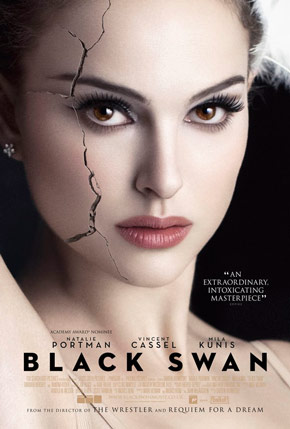 A great deal of the awe I feel for Black Swan is owed to the career-defining performance of Natalie Portman. There’s not a second that she’s on screen that you’re thinking, hey, it’s that bland monotone queen what’s-her-face from the crummy Star Wars prequels. No. Heck, we’re talking Leon/The Professional territory here. Heck, even better. Portman as Nina never once comes across as an actress going through the motions; you lose all sense of who you’re looking at as she melts into and inhabits the role of a tortured ballerina driven to madness in the pursuit of perfection. You believe that this is a woman who has dedicated herself to training and nothing else. Her

While watching Black Swan I actually thought to myself, my god, Natalie Portman looks like she destroyed herself every minute of every day for months on end for this role. Portman reportedly trained in ballet endlessly and worked out five hours a day to get in shape, and it shows. I can’t think of any actress in recent memory who I’ve seen work so hard in a movie…and I’m not just talking physically, but emotionally as well. In fact, this is less a movie about plot than is it about a single performance, and if Portman doesn’t get some kind of major award – an Oscar, Golden Globe, or screw it, something even better invented just for her – then I’ll make her one of my own. The Chris Boyle award. Yeah. She’s earned it. No other actress can touch her. I mean it.

Of her supporting cast, the one that avails himself the most is Vincent Cassel, who really does the whole ‘passionate accented artist’ thing really well. Mila Kunis is solid, looks good, and dances well in the limited amount of time she’s given to do so, but she plays the same exact type of character she’s played

in every movie or TV show she’s ever been in: the laid back party chick. Not exactly compelling, although she does make an excellent foil to Portman’s Nina for that very reason.

What also must be mentioned is the awesome cinematography present in every single frame of Black Swan. The camerawork in the complex dance sequences is nothing short of masterful, with sometimes up to a full uninterrupted minute (or more) of close-up ballet filmed without a cut or edit. These scenes are enthralling. The rest of the film relies on heavy hand-held camera work, but not to worry; it never gets too shaky, and many unique and eye-catching shots are regularly on display.

As for the movie itself, I would have to say it’s brilliant; more accurately put, it’s a flawed masterpiece. When the film concentrates on Nina’s emotionally draining, physically backbreaking work to land the part of the Swan Queen and somehow summon the seductive qualities the role demands, it excels. But when horror elements start creeping in, it becomes hit or miss. At times the horror is intriguing, mysterious, and

wrought with symbolism; but it also manages to be distracting, confusing, and almost silly at points, causing the film to lose its focus. But even at these times, Portman manages to hold things together based on the strength of her acting alone. Okay, okay, she gets a little help from her co-stars, too.

Also an annoyance is every single instance of CG that pops up in the movie. It’s rare that any computer effects appear in Black Swan (and they have nothing to do with enhancing anyone’s dancing, it’s just scary stuff), but when they do it’s aggravating because A)

they look a little cheesy, and B) they’re not exactly of the highest quality, unfortunately enhancing point A even more.

In some ways Black Swan can be compared to Aronofsky’s previous film, The Wrestler, in the sense that they’re both about people attempting to capture glory with the threat of self-destruction ever-looming. Overall, I think The Wrestler is a better movie in the sense that it fully realized its potential; the only reason Black Swan falls short in comparison is because it dared to reach so much higher than the simpler themes at play in The Wrestler. But then again, unlike Black Swan, Aronofsky’s ode to broken-down old Pro Wrestling stars wasn’t racing through my mind non-stop for hours after viewing it, so who’s to say which film is actually better?

After watching Black Swan, my first thought…well, actually, more like my 101st thought…is that Aronofsky is following up a work of art like this with a Wolverine movie next? Well, with him at the helm, it’ll be the best damn Wolverine movie ever made, I’ll bet. And probably the weirdest.

So, Black Swan: it’s intense, emotional, original, breathtaking, crazy, and occasionally dumb, with one of the best performances I’ve ever seen by a female lead in any movie ever made. Please, please, please go see this.