(Long Island, N.Y.) It’s funny…everyone is waiting for Pixar to finally lay an egg, fire off a dud, hit a foul ball, and they never do it. It’s like people WANT them to fail, and it’s gotten to the point these days that if Pixar releases a film that might be anywhere from, say, anywhere from one to seven percent removed from the greatness of their all time classics (such as Toy Story or WALL-E), everyone is suddenly saying Pixar is going down the tubes, even though said film is still most likely better than 99 percent of the movies released that year. Hell, that decade. “Oh, gee, Brave only made $66 million in its opening weekend! Pixar’s going down!”

ONLY made $66 million. That’s insanity. People love to hate success, even when said success is deserved.

Anyway, yes, today’s review is Brave, the latest effort from Pixar Animation Studios, the only decent creative arm of Walt Disney these days. It’s a bit of a departure for Pixar in the sense that it’s their first film featuring a female protagonist. It’s also unique in the Pixar lexicon in the sense that it features an almost all-human cast, as opposed to toys or robots or monsters or insects (although there ARE a few cute animals co-starring…The Incredibles is really their only Pixar film with just human characters…I think?).

Anyway, Brave is an adventure film set in 10th century Scotland, involving a princess named Merida (Kelly Macdonald), who is set to wed an eligible bachelor (exactly whom is to be decided via an archery contest). However, Merida, a fiery redhead (aren’t they all?), would much rather wander the countryside adventuring, bow in hand, than live in a castle with some stranger she calls a husband. Wanting to be master (mistress?) of her own destiny, she comes into conflict with her mother, the strict Queen Elinor (Emma Thompson), who insists that she carry on with their tradition.

When Merida herself competes in the archery contest to decide her hand in marriage in an attempt to free herself of the obligation of marrying into one of the allied clans of her father, King Fergus (Billy Connolly), her mom pretty pissed, and after winning the contest, Merida runs off into the forest, where she encounters a witch who offers to help her in her family situation…with a bit of magic. 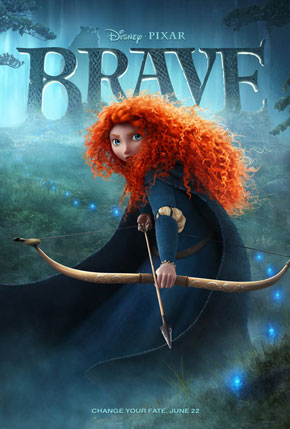 However, as usual, we discover that all witches are evil, and when they offer to help, they really have ulterior motives, and Merida spends the rest of the movie trying to fix the havoc wrought by the witch’s spell (I won’t tell you what she did, but let’s just assume it’s not a NICE spell she cast, okay?). Along the way, lessons are learned on family, love, and acceptance, and all that heartwarming stuff that Pixar does so well.

Even when they’re not 100 percent on their game, Pixar still delivers the goods. They excel at crafting very human, very poignant, very emotional tales that entertain, involve, and make you laugh, while filling them with characters you actually care about, which nine out of ten films fail miserably to do these days. Apparently, it’s a lost art to make a movie that audiences will remember for months or years after they walk out of the theater, as opposed to something they’ll forget five minutes after the projector stops rolling (or whatever it is that digital projectors do these days, since I doubt they roll when there’s no film involved in digital…ah, forget it).

Brave isn’t perfect…the cast isn’t quite as endearing as some of Pixar’s past successes, and the plot could have been fleshed out a bit more (in the second half of the movie things kinda get a little bland and inconsequential), but as it is, it’s still a fine piece of entertainment. Don’t worry…you’ll have fun.

And this is Pixar we’re talking about here, so of course the visuals are doing pretty much everything that they can to get your attention away from the plot and characters. As far as the graphics and animation go, this is Pixar’s finest work yet…watching Merida’s crazy, curly red mane bob every which way for 90 minutes or so worth the price of admission alone. Wow, remember the early days of CG when the characters had this big, molded, single piece of plastic hair that didn’t move? We’ve come a long way.

So, Brave is good…very good, in fact, but not perfect…I mean, it’s no WALL-E, but it nonetheless represents yet another triumph for Pixar. Kid or adult, you will enjoy it.