(Long Island, N. Y.) Arnold Schwarzenegger and Sylvester Stallone, two of the biggest action stars ever, have released new films in the last few weeks…and both films have tanked hard at the box office.

I guess the 1980’s, the heyday of both the Action genre and of Schwarzenegger and Stallone’s careers, are officially dead. It is a sad day.

Alas, while I can look back at the merciless cinematic bloodletting that Arnold and Sly provided during my youth and smile, it’s a simple fact that kids seeing movies today have no idea who these guys are. Both actors are now in their 60’s, and both are attempting late-career comebacks, but the numbers speak for themselves- Schwarzenegger’s “The Last Stand,” a film I felt was a very fun, strong entry into a crowded January marketplace, opened with a meager $6.3 million, and this week’s review subject – Stallone’s “Bullet to the Head” – did even worse business with a mere $4.5 million opening.

Now, I’ve always been a far, far bigger Arnold fan, but the fact that The Governator’s film bombed LESS than Sly’s is cold comfort; the big picture this represents is disheartening, as it’s saying that perceived relics from the 80’s are no longer welcome in 2013. Sure, people will buy tickets for the traveling

side-show that The Expendables represented out of pure curiosity of how their childhood action heroes have aged throughout the years, but apparently they’re not interested in anything

beyond that. In the case

of The Last Stand, that’s a shame, as it was a well-made film with a very impressive performance by Schwarzenegger in an age-appropriate role, backed up with good action and a great supporting cast.

But Bullet to the Head…not so much. 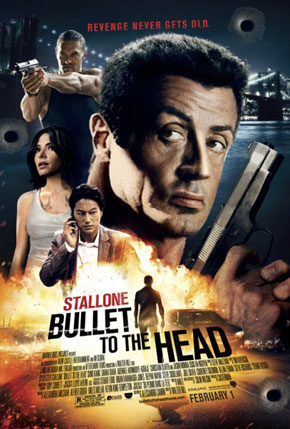 Honestly, Stallone’s solo return to theaters after the success of The Expendables films (which were a group effort) is less than good. However, it’s really not his fault- he seems to be the only person in the film trying, and at 66 years old, Sly is as chiseled and buff as ever, which is pretty crazy when you think about it. He also appears to still be able to move fairly decently despite his advanced age (a little choice editing helps, of course), and still seems to possess his trademark intensity. It’s pretty impressive that he can still bring it.

No, the problem with Bullet to the Head, directed by Walter Hill and based upon a French graphic novel, isn’t with Stallone; it’s with pretty much everything and everyone else not named “Jason Momoa.” Momoa, if you recall, played the title character in the recent Conan the Barbarian reboot and was pretty much the only bright spot in that steaming pile of garbage. Here, Momoa plays a vicious baddie and again, is pretty much the highlight of the film; his physicality and charisma pretty much demands another shot at some kind of starring role down the line, to be sure. No, he’s not the problem, either.

However, the story, the supporting cast, and dialogue…THAT’S where Bullet to the Head falls into the sewer.

The story is as cliché and threadbare as they come- Stallone plays Jimmy Bobo (lol), a hitman who doesn’t kill women or kids (of course, he wouldn’t be likable if he did, right?), but will kill just about anyone else. After a job, the evil Keegan (Momoa) attempts to rub Jimmy out, but while he escapes, his partner Louis (Jon Seda) isn’t

so lucky and is killed. Hey, it’s a revenge film!

So, in order to take

down Keegan and avenge his friend’s death, Jimmy is forced to partner up with a slick cop who is also on Keegan’s trail (played by Fast Five’s Sung Kang, who is just a horrible bore here), and of course the two are polar opposites and hate each other at first. Oh, and Jimmy’s got an estranged daughter to whom he promised he would get out of his life of crime, but while she’s mad at him for not doing so, she’s (naturally) sweet on his partner, despite the fact that he has the personality of navel lint.

Does all this sound familiar? Oh, did I mention that director Walter Hill made his name crafting mismatched partner action movies (48 Hours, Another 48 Hours, Red Heat, etc.) like this back in the day? Yeah, that’s why.

The dialogue is bad. The actors that say the dialogue are, for the most part, bad. The story is paint-by-the-numbers and, yes, bad. This is a generic, bad movie. Just know that.

However, on a base level, there’s some fun to be had. Bullet to the Head doesn’t have the good casting or flashy direction of The Last Stand, but it does possess some nice, throwback 80’s Action charm. I mean, there were, like, A MILLION of this kind of movie made back in the day, although many of them were better than this. And while it does come across as kind of tired filmmaking at this point, there is something to be said for taking a trip down memory lane, even if it’s a poorly-made example of said lane. Nostalgia can only go so far, of course, before the

obvious warts adorning Bullet to the Head start becoming all too apparent, but it’s better than nothing, I guess.

So, if you want to watch 80’s Action in its death throes and mourn the passing of the most testosterone-laden genre ever while it slowly burns and rises anew like a phoenix from the ashes into its modern cinematic incarnation – a far more tame, CG-laden, and pedestrian product populated by sensitive men who scarcely tip the scales at

150 pounds – then I guess give Bullet to the Head a shot. But ONLY if you haven’t already seen The Last Stand, okay?