(Long Island, N.Y.) I went into Chernobyl Diaries expecting garbage. Maybe fun garbage, but garbage nonetheless. What I got, surprisingly, was an atmospheric horror movie in a unique setting that does a nice job of building a mounting sense of dread. It’s nothing groundbreaking and it certainly won’t be remembered as a classic, but if you’ve been steering clear of Chernobyl Diaries and consider yourself a fan of horror flicks, you’re doing yourself a disservice.

On paper, the set-up is as generic as they come; Chris (Jesse McCartney), his girlfriend Natalie (Olivia Taylor Dudley), and their friend Amanda (Devin Kelley) are traveling across Europe and, while stopping over in Kiev, Ukraine to visit Chris’ brother, Paul (Jonathan Sadowski), decide to go on a guided tour of Prypiat, an abandoned town right next to the Chernobyl Nuclear Power Plant. You remember Chernobyl, right? The worst nuclear power plant accident in history?

Anyway, back in 1986, an explosion spewed loads of radioactive contamination into the atmosphere, and everyone in Prypiat, where all the workers lived, got the hell out ASAP. The town has remained completely deserted for over 25 years, and to those who dig those sorts of things, like our film’s protagonists, it makes a nice underground tourist attraction.

With their guide Uri (Dimitri Diatchenko) driving them there in his crapped-out minivan, our gang goes to check out the radioactive ruin of a town. As for the dangers posed by contamination, they’re assured that getting the equivalent of non-stop chest x-rays for a few hours won’t hurt them, which, of course, they believe. Stopped at a checkpoint by Ukranian military, Uri instead finds a “secret” path through the woods to get into the city, and soon they’re walking through creepy empty buildings and having a grand old time. 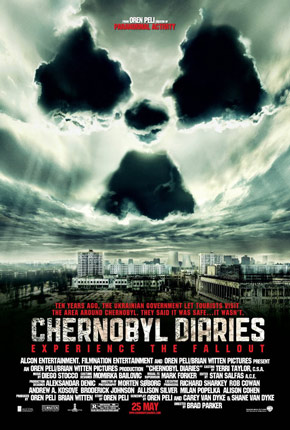 Until, naturally, it’s time to leave and they discover that (SURPRISE) the engine won’t start because (SURPRISE X2) someone ripped out the cables from the distributor…thing. I think? I know nothing about automobiles, but suffice it to say, the van’s been sabotaged by unknown individuals, and they’re stuck for the night.

While stranded, our gang is attacked, first by mutated wild dogs, and then…by something else. Soon, the group is whittled down one by one and it becomes a question of what will get them first- the cannibalistic mutant creatures inhabiting Prypiat, or the deadly levels of radiation?

Again, when discussing the plot of Chernobyl Diaries, it sounds like a billion other horror movies (someone count…have there actually BEEN a billion horror movies made, or am I guilty of hyperbole?). But, in its execution, it’s the little things that set it apart. It flows at an excellent pace, slowly building up to the scary stuff gradually without throwing everything at you at once. I would almost say it has a slow pace throughout, but I think this works in Chernobyl Diaries’ favor, as it helps to highlight its second strength: the setting.

Chernobyl Diaries appears to have been shot 100% on-location, and somehow the filmmakers found a very convincing Soviet-era town and industrial area that was appropriately dilapidated to shoot in. Everywhere you look, you see dust and decay. It also helped that these environments were lit with very natural-looking light, especially in the night scenes; too many horror movies go for an overly-lit, “studio” look where you can see everything, but in Chernobyl Diaries, it’s the moonlight, and character’s flashlights, and that’s it. Very effective, as is the fact that you never really get a good look at the creatures in this movie, leaving their true, horrifying nature up to the viewer. It’s very Silent Hill-like in that respect.

All this, plus some very solid acting from the cast, add up to a dreadful atmosphere where you really feel like the characters are alone; isolated in an alien landscape and surrounded by the unknown. Yes, the characters do some really dumb crap at points, but I never said the movie was perfect. Chernobyl Diaries was written and produced by Mr. Paranormal Activity himself, Oren Peli, and his knack for coming up with a story that puts a twist on a well-worn horror archetype certainly still seems to still be working.

So, overall, Chernobyl Diaries is a very decent horror offering, and if the genre at all appeals to you, I highly recommend you check it out.