This quaint cozy eatery is owned by Chef Frédéric Piepenburg, a European-trained pastry chef who lived in Paris and worked at many of the top hotels in France before opening his own bakery off of the Avenue des Champs- Élysées selling bread to famous people such as Fashion Designer CoCo Chanel before planting his roots in New York City.

Upon entering we were immediately welcomed by Chef Frédéric easily recognized by his thick white muttonchop whiskers and handlebar mustache who is often mistaken by St. Nicholas or better known to small children as Santa Claus. The restaurant is decorated with old world charm and a revolving display of enticing pastries. Between the tags for chocolate “ganache tart” and “diabetic moka mousse cup” are exhortations to “Eat what’s in Season!”

Specialties for brunch include Chef Frédéric’s famous omelets or a sweet showered French toast with cinnamon sugar. The savory menu features French dishes such as Croque Monsieur and Madame, pâté, Nicoise salad to Germany treats such as herring and potato salads to Italian Gnocchi Florentine and Hungary Goulash.

Before the Christmas Season is over make it a point to stop by and visit Chez Le Chef and order your Holiday desserts. For more information contact Chez Le Chef at 212-685-1888.

OK! Magazine and Star Vodka presented a private opening of Tribeca’s newest restaurant, AOA Bar and Grill located at 35 Avenue of The Americas, South of Canal Street on Tuesday, December 13th, 2011 from 8P.M. until midnight.

Nadov Cohen, Executive Chef and Owner, expressed during our interview the many amenities the restaurant provides.

Located in the heart of Soho and Tribeca, AOA Bar and Grill is the largest American kitchen, all day bar and sporting lounge south of Canal Street.

During the event I had a chance to chat with Star Vodka founder, Charles Ferri.

Star Vodka was founded by Charles Ferri in 2008 and became Ferri’s sole focus in 2010. Star Vodka is an American-made, gluten free, luxury vodka that is produced in limited quantities for select clientele. It is made with pure Cascade Mountain water in Oregon and uniquely filtered five times through cooled lava rock.

“I created this vodka for the consumer that appreciates a quality vodka and desires a smooth tasting spirit that doesn’t need to be deluded with beverages to be enjoyed,” said Ferri.

Kids in Distressed Situations, Inc. (K.I.D.S.), the internationally renowned children’s charity hosted their annual Holiday Gala on December 8th, 2011. The charity benefit raised over $1.1 million at its 26th year. The glamorous event was held at 583 Park Avenue. Six hundred guests attended to give their support and to hold tribute to the significant impact that retailers and vendors play in partnering with a not-for- profit to meet the needs of those struggling to survive either poverty or natural disasters.

Mr. Lawrence remarked after receiving the K.I.D.S. Retailer Award “That corporate social responsibility plays an integral role in the culture and policies of the major retailing company.” With its own fund that supports after-school activities for children in need, JCPenney serves as a role model to other corporations for its commitment to building a next generation that is well educated and productive citizens. 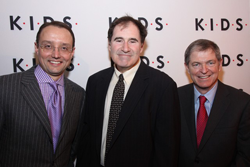 Joe Shamie, co-president of Delta Children’s Products and recipient of the Humanitarian Award, shared his personal impressions about the “gift of giving”. Speaking about the tradition of giving back instilled in him since his youth through his family, Shamie noted the joy that he feels when he and Delta Children’s Products can provide products to children around the country. In addition to the donations he provides of cribs, play yards and other juvenile product, Jerry Storch, CEO of Toys”R”Us, noted the leadership role that Joe has played in setting safety standards in the juvenile product industry as he presented Joe with the K.I.D.S. Humanitarian Award.

Adding to the evening’s impact was a provocative presentation by Andrew Ross Sorkin, author of Too Big To Fail and co-host of CNBC’s Sqwak Box who recounted the lack of interest that Steve Jobs displayed toward philanthropy. Approached on several occasions to build a philanthropic vehicle to distribute discretionary funds to those in need, Jobs never saw corporate social responsibility as his role. Sorkin’s disclosure of this fact recently has stimulated the type of corporate giving exhibited by the attendees at the event on December 8th.

Richard Kind, well-known comedian and actor, added an element of warmth and pathos about the organization’s mission and reminded everyone of the privilege it is to be able to help others in need. His heartfelt expressions of gratitude to both vendors and retailers underscored the poignancy and relevance of K.I.D.S.

The evening was topped off by the humorous and upbeat introduction by Teen Vogue’s Andrew Bevan in presenting the K.I.D.S. Annual Award to Brian Irving, VP, Global Digital Marketing at Levi Strauss & Co. and by the uplifting songs sung by the Broadway Youth Ensemble.

Since its inception in 1985, K.I.D.S. has provided 67 million underprivileged and disaster-struck children with over one billion dollars of NEW clothing, toys, basic necessities, juvenile products, books and much more. The donations of new products are distributed through an established network of nearly 1,000 local community social service agencies in the U.S. and abroad. K.I.D.S.’ efforts reach youth, age 0-18, and their families who are challenged by poverty, homelessness, domestic abuse, low literacy, military family service, major illness, incarcerated family members and disaster survival.