(Long Island, N.Y.) Chronicle is a science fiction film directed by newcomer Josh Trank, and yes, it comes to us in the form of one of those “found footage” movies. In other words, one of the characters is wielding a video camera at all the right moments, obsessed with documenting their life for all the audiences of the world to see, and (most of) the movie’s run-time is made up of this supposedly “real footage”. Blair Witch did it. Paranormal Activity did it. Devil Inside did it. But before you groan at the idea of seeing yet another movie using this gimmick, let me just say that none of those aforementioned “found footage” films did it quite like Chronicle does.

Chronicle is about three high school teens played by twenty-somethings Andrew (Dane DeHaan), a loner and outcast, frequently picked on at school and beaten on by his abusive father; Matt (Alex Russell), Andrew’s cousin; and Steve (Michael B. Jordan), a popular football player. Andrew is the character in this movie that always insists on lugging his camcorder everywhere in order to video his life (such as it is), and it’s from this perspective that we view the majority of the movie (although we do get the perspective of other various video recording devices as the film goes on).

One night, the trio discover a strange hole in the wilderness and, upon descending into said hole, encounter a glowing crystalline object that first endows them with nosebleeds, and eventually, telekinetic abilities that grow stronger the more they’re used. Initially, the teens use these powers to goof around, playing pranks and whatnot (hell, I’m a jerk, I’d do it too), but eventually they start tapping into the true potential of their new-found abilities, and before you know it, they can even fly! Sure, it’s all fun and games for a while, but soon Andrew, like any abused emo kid is likely to do, starts using his powers to strike back at those who have wronged him.

However, it just doesn’t stop there…soon Andrew develops an “apex predator” complex of sorts, and soon becomes a threat to society, bringing Matt and Steve into direct conflict with…well, we’ll leave it at that. You’re smart people, so I’m sure you can guess where it goes from there, but let’s just say that it all leads to a super-powered showdown that wrecks a good chunk of the downtown area. It’s pretty glorious, actually, with autos being thrown about like Matchbox cars and buildings torn asunder. 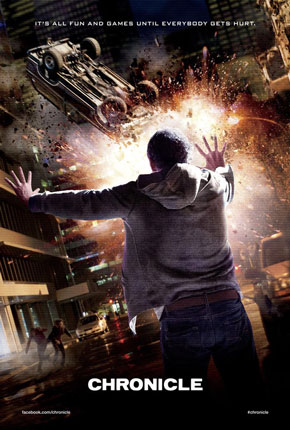 So, what makes Chronicle a good ‘ole shot in the arm in the beaten to death “found footage” genre? Well, in one way, its Andrew’s telekinetic powers that add a fresh visual perspective on things; no longer are we stuck from the viewpoint of the guy holding the camera, as Andrew starts levitating his camcorder as the film progresses, giving us all sorts of fun cinematography you couldn’t get in movies like Paranormal Activity. As the film goes on, footage from outside sources is incorporated, such as feeds from security cameras, and it works well.

Of course, you would think that the low-quality camcorder footage would help to mask the film’s low budget, but this is a prime example of director Josh Trank possessing the ability to do more with less; the complex effects come off as completely convincing, looking like they came from a movie costing many times more than the mere $15 million that was spent on Chronicle.

But it’s not the fancy effects or camerawork that really helps to establish Chronicle as a good movie; it’s the writing. Here we have a fable with three fleshed-out central characters with distinct personalities, characters that you get to know and like…even Andrew, whose descent into villainy comes off as more tragic than anything else.

By making the effort to get you to genuinely care about the leads, the filmmakers get you get deeply involved with them once things go down; it’s surprising how many big-budget extravaganzas can throw every buck in sight at the screen but show a total inability to get you to give a damn about the people. Character development is fast becoming a lost art, folks.

So, Chronicle pretty much came out of nowhere and caught me by surprise, as I suspect it did to a great many moviegoers who were probably expecting little substance to go along with the film’s ample style, based on the trailers. But this is a film that possesses both in abundance, and I highly recommend you give it chance at your next movie outing. Or else!