Bazzèo, ODA Architecture, Dwell Media and their design partners invited their upscale clients, interior designers, fashion aficionados and media to attend an exclusive event for the launch of their fall/winter 2010 new product lines.

Guests enjoyed the newest and hottest trends in sustainable cabinets and interior designs showcased in the newly redesigned Bazzèo showroom in Chelsea, the hottest part of Manhattan.

Cognac Wellerlane interviews Owner and Architect Ana Sternberg at The Cocktail Party Launch at Bazzèo Loft to promote and the launch of Bazzèo, the first eco-centric, contemporary kitchen collection

The chatter of engaging conversation, cocktails and product information made the event a huge success.

I had the pleasure of interviewing Architect and Owner Ana Sternberg of Bazzèo New York Loft. Ms. Sternberg expressed that their products are made in the USA, not something you hear very often these days and it is even rarer to hear the words green, contemporary, kitchen and Made in the USA in the same sentence. That has changed with the launch of Bazzèo, the first eco-centric, contemporary kitchen collection made in the USA. Manufactured at their factory in Secaucus, New Jersey, Bazzèo is committed to seeking out and integrating products and materials that are not only earth-friendly but made in the USA whenever possible.

At bazzèo the reduction and elimination of waste has always been a fundamental manufacturing element. With computerization of the manufacturing process and OTM (On Time Manufacturing) practices, their factory controls the environment used in production and has eliminated the need to stockpile and warehouse large quantities of raw materials. It is also a standard practice to recycle all wood cuttings and sawdust. In addition, bazzèo partners use only controlled growth forests for its veneers and solid wood doors.

By managing production and waste properly, the company becomes more aware of the environment and their obligation to the world at large.

At bazzèo their staff believes that the modern definition of luxury is “personalization” and so each bazzèo kitchen is designed in coordination with the architect, interior designer, developer and/or homeowner, thus creating a unique environment that reflects the client and their individual needs. Bazzèo offers the client a world class product manufactured in the United States. Their products offer an unlimited palate of sizes, finishes, and features to create an environment that will truly reflect the lifestyle of the individual and their kitchen and bath decors.

Ms. Monét is one of the few female theatrical distributors through her firm AM Releasings/Greta Joanne Entertainment. After premiering in New York, Ms. Monét will present the film to Accra, Ghana for a theatrical release engagement. This establishes the first United States Company to ever have a release in Ghana. The film will also have engagements in Los Angeles, Miami, Atlanta, Chicago, London, and Paris.

The star studded cast includes Shiek Mahmud-Bey from films such as “Nightfalls on Manhattan” and “Buffalo Soldiers” along with Angelique Monét, “East New York” Jas Anderson from “Brooklyn’s Finest” and Meah Pace from the TV show “R U the Girl.” “Deceptive” also premiered at Marchedu Film during the prestigious Cannes Festival in France and received the Audience Choice Award at the Hamptons Black International Film Festival 2010.

The film was a collaboration of twist and turns highlighting Ms. Monét’s talents as an actress and writer. The synopsis of the film involves a highly successful record producer Jay Walker excellently portrayed by Actor Shiek Mahmud-Bey who believes he has it all: a beautiful wife, success, friends, fame and wealth. His life takes a dramatic turn when he signs a new female artist to JRuby Records. A dramatic twist develops from this love triangle bringing deception, lies and betrayal.

Angelique Monét is one of the hardest working women in entertainment. In the midst of filming her reality TV show and planning to complete the production of her second film ‘Engaging,” she launched her own theatrical releasing company, AM Releasings and established her first feature film “Deceptive” as the companies’ opener.

For more information on this beautiful actress and filmmaker please visit www.gretajoanneentertainment.com.

The synopsis of the film involves Vito, portrayed by Actor Paul Borghese, having a fatal heart attack as he is exiting the front gate of his stately home. Upon death his mother confronts him making it clear, via a lengthy diatribe, that his existence was one of the material realms of sensual gratification, money, power, status and pleasure. His consequence is being condemned to hell and eternal death. Eventually we discover that this death experience was a dream. This greatly disturbs Vito precipitating him to seek the truth relative to life’s purpose and the afterlife. Vito has periods of contemplation and dialogue with the housekeeper, barber, gardener, and his wife in search of answers. He often ponders is there such a place as heaven? Does Hell exist? Am I a good person? Vito’s soul searching includes a flashback to his youth listening to his grandfather speaking to him about eternity. The film takes you on a spiritual journey. The film was beautifully written by John Martoccia; a first time filmmaker and director.

Mr. Borghese’s off-Broadway acting credits include William Shakespeare’s Macbeth, Arsenic and Old Lace and stage performances with the Italian American Repertory Company. He has appeared in films such as “Air Boss I & 2,” “Belly,” “Summer of Sam” and “Keeping it Real” with Stephen Baldwin. His television credits include “As The World Turns,” the ABC mini-series “Witness To The Mob,” “Saturday Night Live,” “Late Night with Conan O’Brien,” an appearance in the award-winning hit HBO series The “Sopranos,” and he plays a recurring roles on both NBC’s “Third Watch” and also “Law and Order:SVU.” He has most notably portrayed New York Yankee baseball hall of fame Yogi Berra in the HBO original film “61*” which was nominated for 12 Emmy Awards and won several. “61” was directed by Billy Crystal. Paul recently played roles in the independent feature films “Death By Committee,” “For Whom the Drum Beats,” “Transamerica” that starred “Desperate Housewife” Felicity Huffman , and “Little Manhattan” that starred “Sex and the City’s” Cynthia Nixon.

Mr. Borghese is a current member of (SAG) Screen Actors Guild, (AFTRA) American Federation of Television and Radio Artists, (GIAA) Guild of Italian American Actors, (AIVF) the Association of Independent Video and Filmmakers, (AAAA) the Associated Actors and Artistes of America and is a (DGA) Directors Guild of America applicant.

A seventeen year entertainment industry professional, Mr. Borghese is President of PADRINO PRODUCTIONS which is a division of the ten year old Independent Images, Inc. He has extensive experience not only as an accomplished director, producer and distribution executive, but also as an actor. By 1990, Mr. Borghese had an active producing and/or distribution role in some of the almost two-dozen feature films he was in. Production projects included George Romero’s “Document of the Dead,” Beatle George Harrison’s “Wonderwall,” “Fatal Secret” starring David Carradine, “A Time to Remember” starring Donald O’Connor, “Prisoners of Inertia” starring Amanda Plummer and John McGinley, “Destiny to Order” starring Michael Ironside, and “Fright House” starring Al Lewis and Lady Terminator.

Between 1990 and 1995 Mr. Borghese associate produced and served as casting director for five independent feature films including “Perfect Lies” and “New York Nights.” Oliver Stone and Columbia Pictures recognized Mr. Borghese’s talents as a filmmaker and hired him to contribute a montage segment in the Academy Award nominated, “The People vs. Larry Flynt.”

Mr. Borghese then co-wrote, co-produced and directed the feature film “Four Deadly Reasons.” This film was completed in 2002 and won the Back East Best Buzz Award at the Back East Picture Show Film Festival in Hoboken, NJ, The Low Budget Genius Award at the Silver Street International Film Festival, the “Best of Fest” feature film at the Putnam Valley Film Festival and it screened at the Los Angeles Italian American filmmakers Awards and at Robert DeNiro’s Tribeca Film Center on opening night of the Tribeca Film Festival. Mr. Borghese recently completed directing a feature film he co-wrote the screenplay for, “Searching For Bobby D” (as in DeNiro). Although Actor Robert DeNiro never appeared in the film it received a great deal of publicity on Page Six of The New York Post. The strong ensemble cast included Carmen Electra, Sandra Bernhard, Kevin Dobson, Mario Cantone, Tony Darrow, Tyson Beckford and Robert Costanzo.

Mr. Borghese is presently working on his new project, the film “Goat.”

For more information on this versatile actor please visit www.paulborghese.com

The film “Vito Bonafacci” also features Actor William DeMeo who portrays Father La Golbo. For over a decade now, William DeMeo has been an entertainment industry professional. Mr. DeMeo has skillfully worked as a producer/writer and accomplished actor.

His first production project was the independent feature film “One Deadly Road” which he wrote, produced and portrayed a leading role in. The motion picture was distributed overseas, aired on pay-per-view television and was distributed nationally onto Home Video. The film was shot on 16mm color film. 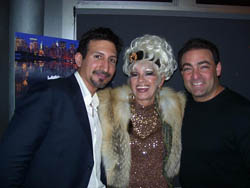 William went on to write, produce, co-direct and play a leading role in the feature film “Wannabes.” The film was picked up by Artisan Entertainment and was released in theatres before its national Home Video/DVD release in 2002 including Blockbuster. William won the Best Actor Award for his performance in “Wannabes” at the New York Independent International Film Festival. The film also won the Best Director and Best Supporting Actor Awards at that festival. It was shot on 35mm film, as was William’s next film, “Searching for Bobby D” which he produced and co-wrote the screenplay with his director Paul Borghese.

In addition to the roles William has played in the films he has produced he has also appeared in numerous other feature films as well as on national television shows and in mini-series. He portrayed a young Carlo Gambino in “Boss of Bosses” and the character Al Pacino in “Analyze That.” He was also featured in “Hackers.” Mr. DeMeo appeared numerous times in the last three seasons of The “Sopranos” as one of Paulie Walnuts’ crew members, Jason Molinaro. Recently he played a supporting role in the independent feature film “For Whom The Drum Beats,” very well known actor Frank Vincent’s son in the feature film “American Woman,” a pick up artist in the television reality show pilot of “GEEK TO GUIDO” and a regular mob crew prankster member in the television reality show pilot “YOU GOT WHACKED; Gangsters and Pranksters.”

Mr. DeMeo is the screenwriter and lead actor in “The 6th Family” with Armand Assante and Ice-T, directed by Paul Borghese. This film begins shooting this summer.

He also plays the commentator “Frankie the Fixer” for the new TV pilot “Sitdown” With Vinny Pastore and Tony Darrow. In the show, people with disputes are brought in to a social club by William and Vinny and Tony decides the outcomes of the disputes.