(Long Island, N.Y.) Contraband is a solid yet unoriginal and unremarkable action/thriller about a criminal trying to turn his life around who is forced to come out of retirement to do “one last job.” Hey, I almost had to stifle a snicker when I typed that opening sentence, since, along with avenging the death of one’s master and the loner cop being forced to take on a new partner, the “one last job” plot device it possibly the most overused in all of Hollywood. Yet, it’s taken out and dusted off once again, this time as a starring vehicle for good ol’ “Marky” Mark Wahlberg.

Yet, the way the “one last job” element is used here is embellished by factors that push it’s believability to the breaking point, even when taken into account that this is just a movie. You see, Marky Mark plays Chris Farraday, an ex-smuggler who has begun a new life for himself by starting his own business. He’s married to Kate (Kate Beckinsale), and they and their two children enjoy a relatively happy life. That is, until her loser, degenerate, low-life brother Andy (Caleb Landry Jones) tries to smuggle drugs that he ends up destroying when faced with U.S. Customs agents. This doesn’t make his employer, street-thug mobster Tim Briggs (Giovanni Ribisi in an amusing bit of against-type casting), all that amused, and Marky Mark has to step in to prevent Andy from getting killed, not only endangering himself, but his family as well.

The unbelievability of the “one last job” plot point comes in the form of the degree of help Marky Mark is willing to provide for his brother-in-law. Getting in touch with his old smuggling contacts, Marky Mark sets out on a cargo ship to Panama with the intention to smuggle back counterfeit money to see in the States, and in doing so, sets off a chain of events that involves running afoul of a third-world crime boss, shootouts with police, explosions, art theft, drugs, betrayal, jail, and death, not to mention the fact that the evil Briggs is terrorizing Kate and the kids back at home while Marky Mark is risking life and limb in Panama. Things go wrong at every conceivable point, the situation just gets worse and worse, and you’re left scratching your head as to why Marky Mark is even bothering going through this hell, especially when you consider the fact that Andy is a fairly worthless human being to begin with. 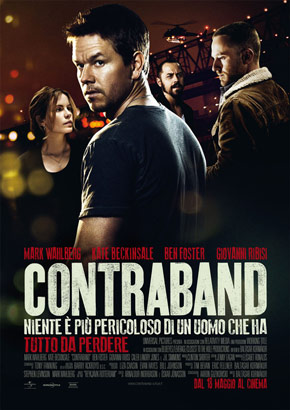 Of course, none of this is helped by the fact that here is pretty much ZERO character development in this movie. Seriously, none. The movie opens with the botched smuggling job, Andy goes to the hospital, and Marky Mark instantly gets the ball rolling on this insane plot to help his brother-in-law out. Now, we know nothing about Marky Mark’s relationship with Andy, or what kind of person Andy is (although, if he’s running drugs for a living, it’s pretty much a lock that he’s not an upstanding, law-abiding, community-oriented citizen-of-the-year candidate).

If we’re supposed to believe that a character would go through the insanity Marky Mark does to try to help someone, you damn well better establish that these two have a damn close
relationship…that, or at least give Andy some kind of redeeming quality, because as he’s portrayed in this movie, he has none. I mean, I’d have a hard time doing what Marky Mark does in this movie for my own MOTHER, who is a genuinely wonderful person, let alone Andy, who’s a walking, talking piece of crap. Anyone with half a brain would just cut this idiot loose and be done with him.

And yes, mom, if you’re reading this, I WOULD smuggle counterfeit money to get you out of a jam. See you tonight at dinner. Otherwise, Contraband is a tight little action movie with some good performances. As usual, Marky Mark excels at playing the type of character he portrays here: a somewhat ugly, everyman type with a rough physicality that makes the actions scenes he’s in seem fairly believable. Kate Beckinsale is actually rather good as his spunky, white trash wife, and Giovanni Ribisi is a bit of a hoot as a gangster; despite his small stature, he manages to disappear into the role and actually comes across as rather mean and nasty. Also of note is a small role featuring my main man, J. K. Simmons, who plays a cargo ship captain. Caleb Landry Jones (who you might remember as Banshee in the recent X-Men: First Class) is okay and Ben Foster is…well, also okay, I guess. Neither of their roles amount to very much.

And man, what happened to Lukas Haas? Was he always this emaciated? Yikes.

Contraband is a decent offering to be sure, but when taking into account that the theater is loaded with better films at the moment (such as The Girl With the Dragon Tattoo and Tinker Tailor Solider Spy), you’d have to be pretty hard up to choose it over the other choices available. But if you have to choose between this and junk like the new Sherlock Holmes or Twilight movies, Contraband is the clear-cut winner. Trust me.