(LONG ISLAND, NY) Brooklyn born and Long Island raised singer, Cristina Fontanelli, loves to come home to Long Island to perform. She debuts her new show “From Bagels to Bocelli: the Musical Journey of My Life” at the Dix Hills Performing Arts Center at Five Towns College on Sunday June 1 at 2pm.

“The show chronicles the craziness of my journey from starting in the ‘Borscht Belt’ in the major resorts in the Catskills to performing at George Bush’s inauguration in 2005 as well as performing for President Clinton,” Fontanelli said. 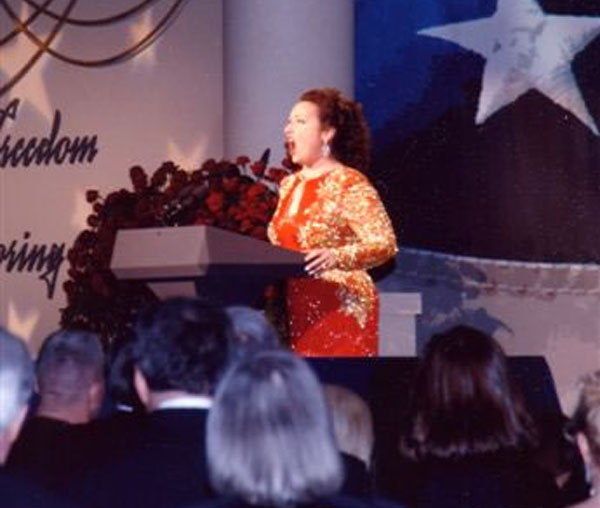 Cristina Fontanelli opened the ceremonies at the Stars and Stripes Presidential Inaugural Ball in Washington D.C. where she sang the “Star Spangled Banner” and “God Bless America” to an audience of over 6,000 invited guests and dignitaries.

“My career came about in an unusual way,” she continued. “I’m a dedicated opera singer but the journey up the ladder is colorful. I wasn’t all of the sudden in a serious opera house.”

“I studied at the American Academy of Dramatic Arts,” she said. “I wanted to be an actress but I was shy and a bit overweight. Then a light bulb went off – I could be an opera singer, they’re chubby. This way I could eat lasagna.”

Even the story of how she began singing opera is comical.

“I was taught by a tiny Italian lady in Brooklyn,” she said. “She smoked and just said to get over it. There was a train trestle outside so while I was singing trains would go by. She had a stuffed bear head, but this head was not over the fireplace, it was coming out of the fireplace. She would send me to the local church to sing ‘Ava Maria’ and ‘Mamma.’ I got paid $25 and I joke that I still get paid $25.” 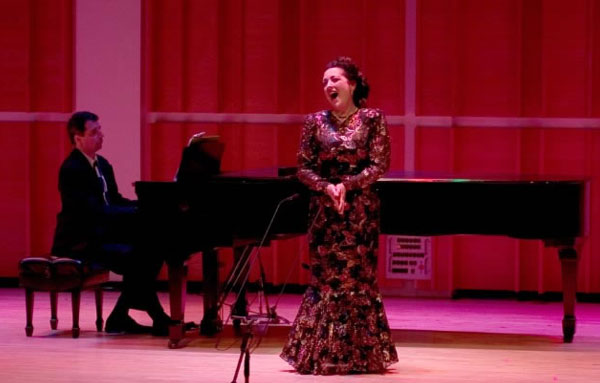 Don’t let her wry humor fool you. Fontanelli has toured around the world including Europe, Japan, Korea, Africa, Istanbul, Hong Kong and the Middle East. She has performed with major orchestras, opera companies, nightclubs and festivals throughout the world. Recently she was a PBS-TV host for Andrea Bocelli’s concert “Live from Central Park.”

Her show takes you through her career and around the world through songs and stories. It includes Broadway show tunes, including “Time to Say Goodbye,” “Besame Mucho,” “Send in the Clowns,” and songs of Andrew Lloyd Weber. It will also include some Yiddish songs, Frank Sinatra – because her mother is from Hoboken- and Opera.

The show is chock full of anecdotes. She tells the story of when she went to Boston to perform on a Greyhound Bus during a strike.

“The doors closed and we were ready to leave,” she said. “The driver turned around and said ‘Does anyone know how to get to Boston?’ It gets better. Some people were telling him how to get to Boston and they told him the wrong way, then they fell asleep. The bus broke down along the way. We finally got there and I realized I forgot my dress, so I had to go to Filene’s Basement and get a dress.” 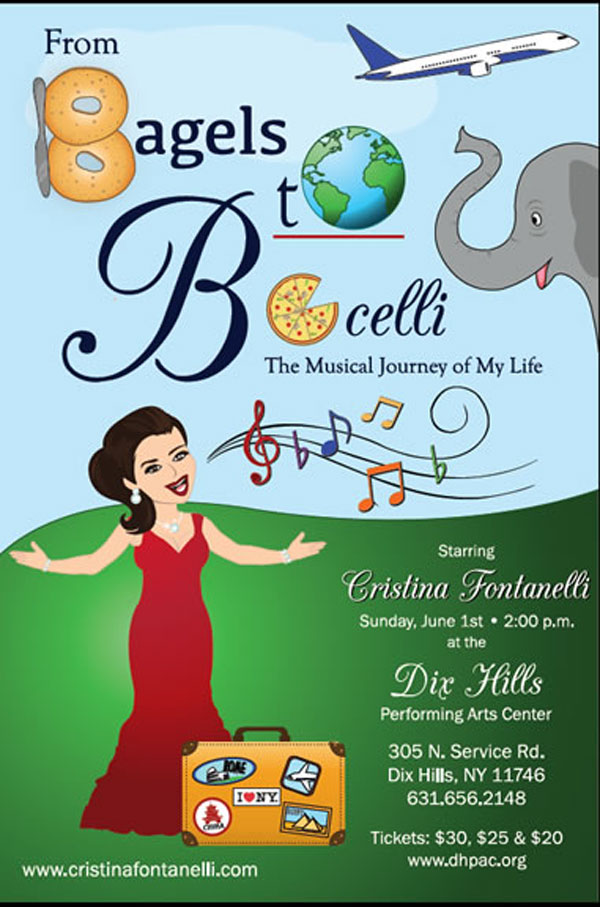 Fontanelli performed a nightclub act at Feinstein’s at the Regency Hotel in New York City.

“I wrote this show because people were hungry for it,” she said. “They would ask me when I would be performing my night club act. It’s super entertaining. It makes you laugh. It makes you cry too. When I sing ‘Mamma’ they cry.”

Her music appeals to people of all ages.

“There was a man that took his 95 year old mother to see my ‘Christmas in Italy’ show,” she said. “June 1st is his mother’s 96th birthday and she chose to spend it at the show. They are bringing the children and the grandchildren and he asked me if I could dedicate ‘Mamma’ to her.”

“It [the music] is considered old fashioned but I’ve had young people, kids, teenagers and people in their 20s say they loved it,” she said. “There was a 21 year old girl when I sang at a park on Long Island that said she had tears in her eyes, she loved my show. That’s what singing means to me.”

Tickets are sold through the Box Office at (631) 656-2148 and online here.  Tickets are $30 and $25. More information on Ms. Fontanelli can be found at www.cristinafontanelli.com