(Long Island, N. Y.) You know, in the past I’ve been rather hard on director Quentin Tarantino….I’ve often felt that he’s one of the most overrated filmmakers in history. His penchant for mixing drama with camp and for a little too blatantly wearing his cinematic influences on his sleeve were just things I had trouble hanging with. Sure, his breakout film Pulp Fiction was great, but ever since then his films have just come across as trying way too hard to be cool while his dialogue, once a strong point, seemed to have recently left its quality by the wayside.

However, Tarantino partially redeemed himself and, if you ask me, truly started living up to his reputation with 2009’s World War 2 epic, Inglorious Basterds. Tarantino crafted an intense, emotional tale that nonetheless retained his more quirky and humorous trademark touches, albeit far more effectively integrated into his overall narrative. Tarantino then followed up that fairly significant triumph with the subject of today’s review: Django Unchained, a tale of the brutality of slavery in the pre-Civil War south as a freed slave goes on a bloody quest for revenge.

Freed from the bonds of slavery by bounty hunter Dr. King Schultz (Christoph Waltz), Django (Jamie Foxx) teams up with the former dentist to track down his former slavers; men who just so happen to have a huge price on their heads that Schultz would love to collect. To entice Django (the “D” is silent, by the way), Schultz offers to help the former slave turned gunslinger to track down his beloved wife, separated from him months earlier at a slave auction. Django agrees, and his wife’s trail leads the duo to the plantation of one Mr. Calvin Candie (Leonardo DiCaprio), a brutal fiend whose head slave, Stephen (Samuel L. Jackson), is a cunning backstabber of a man seething with anger and deviousness. Together, they form a perfect yet deadly foil to Django and Schultz, who launch an elaborate scheme against the evil men that might just backfire and claim their lives.

Django Unchained was great…possibly the best Tarantino movie ever, and I don’t normally count myself as a huge fan of his. Only two problems: one, it was too damn long; Tarantino is that breed of filmmaker who obviously can’t bear not using every single frame he shoots. However, I can’t really say what needed to be cut, quite frankly…it’s not really a matter of cutting any one whole scene, as they all added something to the overall picture. But the film could have used tightening around the edges; little snippets here and there, if you know what I mean. As good as Django is, it would have been near-perfect if it was about 20 or so minutes shorter. 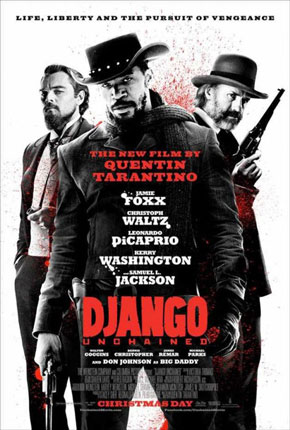 But I must say that, out of any two hour and forty-five minute long movie that I’ve ever seen, Django did indeed feel the shortest. I actually might not have minded the length at all if I didn’t have a splitting headache the entire time…I just wanted to get home and peel out my contact lenses, to be honest.

And the other problem was Tarantino’s usual horrible cameo. He’s seriously the worst actor in any film he’s ever in. But that’s just nitpicking, folks. Otherwise, I was really into this one. The over-the-top action or varied, non-period based music selection didn’t bother me as it has some critics. I will say one thing about QT…he’s a unique filmmaker, and while his tastes don’t always translate into great movie-making, I’d rather see someone take a shot at doing something different and fail than see a successful yet bland piece of crap. I think he succeeded here. I think he succeeded wildly, in fact.

I will say that the inclusion of his usual campy aspects (some of the violence is VERY over-the-top, almost cartoonishly so) did take away from the dramatic elements of Django, but whatever. Not a big deal.

BTW, the dialogue in Django was awesome. I had previously felt that Tarantino completely lost his ability to write snappy dialogue, but while Inglorious Basterds was an big improvement, he’s finally back to form here, and it helps that Tarantino had actors the caliber of Waltz, Foxx, Jackson and DiCaprio to recite it. You could probably have those guys taking turns reciting the ingredients of a box of Pop Tarts and it would sound awesome.

Oh, and it was nice to FINALLY see Sam Jackson play something that’s at least a tiny bit different from the same character he always plays. He even appeared to have gained weight for the role (unless that was just makeup). Jaime Foxx was very good, and Christoph Waltz is an acting god, no doubt, but the big surprise for me here was DiCaprio in his most outlandish role to date. He seemed to relish playing a flamboyant bad guy for once in his career, and watching him really sink his teeth into the role of Calvin Candie was a big treat.

So, Django Unchained may have some warts, but it nonetheless is an amazing and unique movie; a stunning achievement in many ways, and one that you should make certain to experience for yourself if you are a lover of cinema. Go for it.