(Long Island, N. Y.) Don Jon represents actor Joseph Gordon-Levitt‘s writing and directing debut, and after watching the film, I can only say that he has tons of potential; however, it’s only glimpsed here and there amid long stretches of tedium and aimlessness.

Despite not really seeing a problem, Jon nonetheless attempts to try something different by getting into a relationship with a floozy he meets at his club- Barbara Sugarman (Scarlett Johansson), an attractive but vain and shallow woman who has a set agenda when it comes to a man, and sets out to mold Jon into that image. Despite that, Jon (thinks that he) falls in love for the first time in his life, but when the two finally have sex, it’s just as unfulfilling as before. 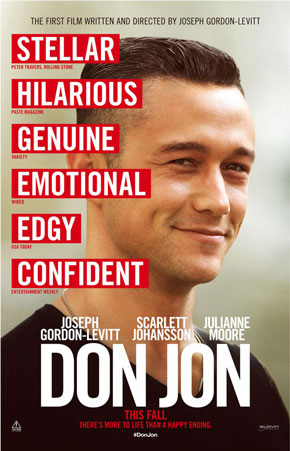 However, for a comedy, Don Jon isn’t very funny. It made me smile several times, but the big laughs come not from Gordon-Levitt, Johansson, or Moore, but from the great Tony Danza, who plays Jon’s ultra-Italian father as a foul-mouthed, wifebeater-wearing nutcase; it’s a shame he wasn’t in the film more, as he steals every scene he’s in. Gordon-Levitt and Johansson do stand out in their performances, however, especially when it comes to their ultra-Jersey accents and attitudes, which come across as 100 percent authentic; it’s easy to buy into their characters, which helps you get into the story that much more.

But ultimately, Don Jon just kind of plods along without any real focus or humor. It’s entertaining in parts, and very well-made and directed, but it’s still a bland affair. Perhaps some clever editing could have tightened things up, but when the core of the movie isn’t very compelling, chopping out a scene or two here or there can only do just so much.

So, Don Jon is an interesting entry into feature-filmmaking by Joseph Gordon-Levitt, and it’s a solid one for an amateur, but it’s just that- amateur.

He’s got the visuals and the acting covered…now he just needs to concentrate on improving his writing and I think he stands to be something to watch in years to come.