I had a chance to chat with Founder Elsie Ginsberg who is dedicated to growing the Macabre Faire Film Festival and Twitch Twitch Productions. Both Elsie and Adam Ginsberg, her husband’s mission, is to accommodate those who love the scare…The thrill…The unknown…And the entertainment provided by experiencing something outrageously different than the norm. They provide unique theatrical productions, films, events, radio, videos, original music and live character appearances for all types of events. 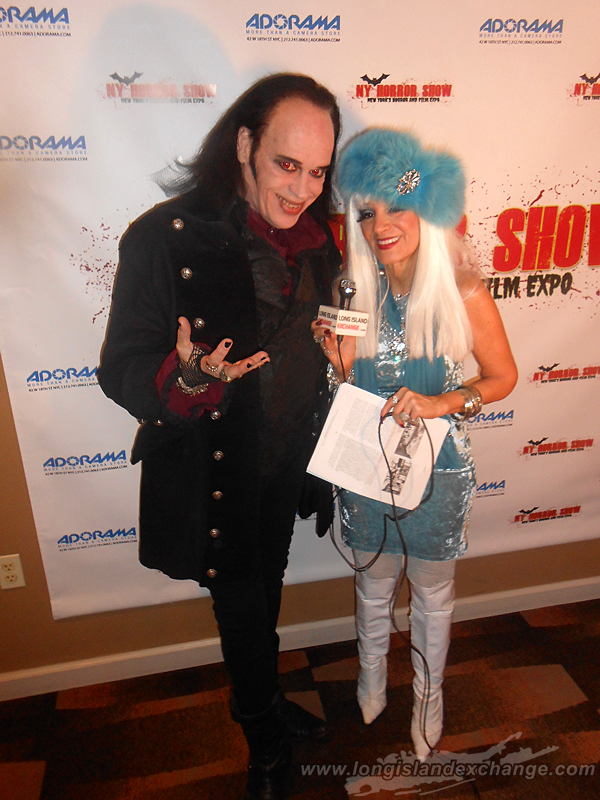 Actor Cleve Hall from the SyFy Channels Monstor Man poses for a photo-op with Cognac Wellerlane at the Macabre Faire Film Festival on January 16, 2015.

Here is what Elsie had to say:

Welcome back darlings, I am Cognac Wellerlane and it’s January 2015 and I am here with Elsie, the lady that coordinated this whole event and the founder of the Macabre Faire Film Festival and she is going to introduce herself to the camera.

Elsie: I thought you did such a lovely job but If I have to do it again I am Elsie Ginsberg but many know me as Elsie Macabre in the filmmaker world and social media but this is me.

Tell my audience about the Macabre Fair Film Festival for those who are unaware of what this evening is really suppose to be about.

Elsie: Well for starters this is our eighth Macabre Faire Film Festival and that all has happened in a matter of two and half years I believe. A lot of people wonder how we managed to do all of that. Well actually we do several different showcases a year. So here we are at the eighth one but January is always the biggest. Why, because we have two sets of awards. Tonight is the night that we actually award the best of the best of all the screenings that we did for 2014. Those are called the Macabre I Awards. Then on Sunday after we have screened what we currently have is 126 independent movie titles that will be screening in four different rooms. On Sunday we will be awarding best in category that night. 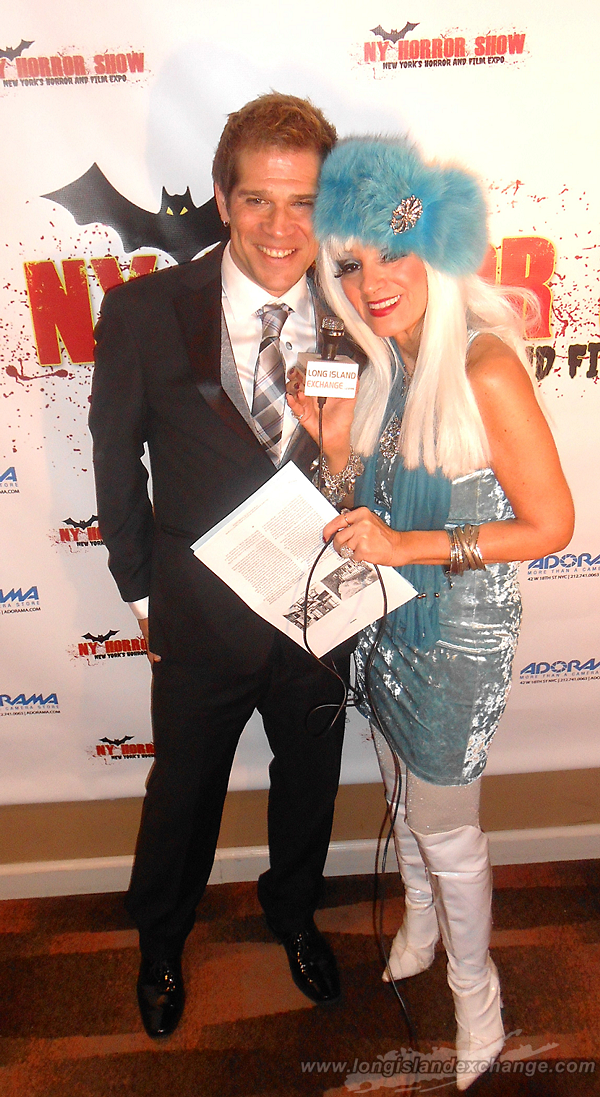 Actor Jonathan Tiersten from Sleep Away Camp poses for a photo-op with Cognac Wellerlane at the Macabre Faire Film Festival on January 16, 2015.

So there is 26 films

Elsie: 126 films; Oh, we don’t play around. We set out our goal to shine a spotlight on independent filmmaking. If we are not willing to really make it a carnival of films then we are not doing what we promised we were going to do. So come hell or high water, we do our best to bring in as much as we can, great films from around the world not just nationally but internationally. We have got filmmakers who have flown in today from the UK, from India, from Canada, from Los Angeles, so we really are excited and with every single one we are doing we are just growing more and more and more. This is really important to us. the red carpet event, because this is our way of elevating the expectations from a genre film festival. 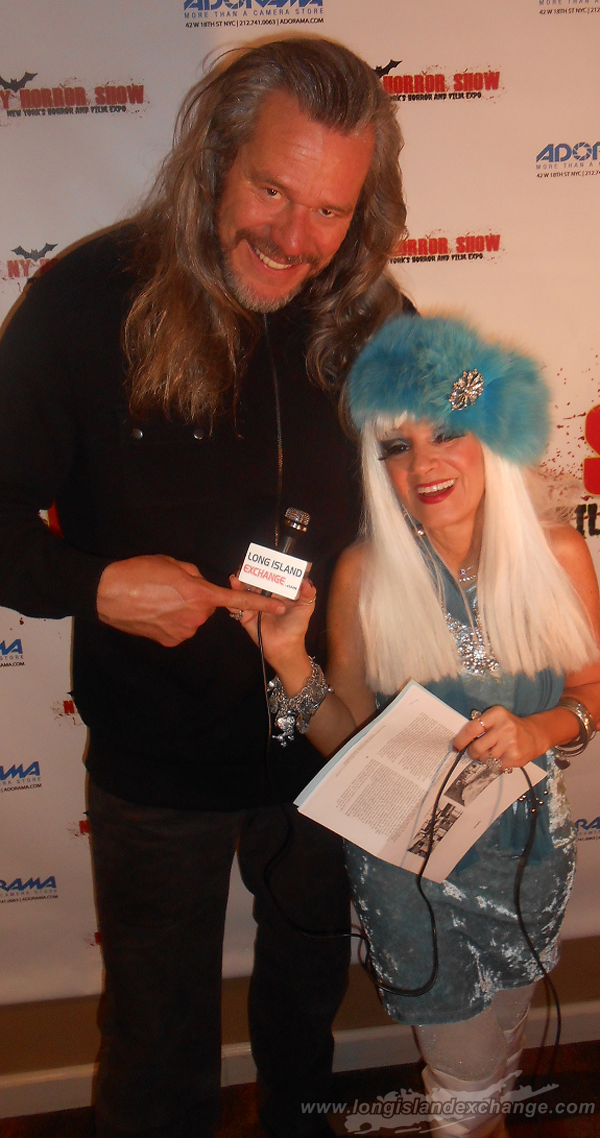 Actor Robert Mukes from House of 1000 Corpses poses for a photo-op with Cognac Wellerlane at the Macabre Faire Film Festival on January 16, 2015.

Not here, your event is very elegant. I must say people are dressed and approaching with gowns and furs like me and diamonds like you. It’s really a very festive glamorous evening. I really feel like I am in Hollywood.

Elsie: Well thank you Cognac. From you I will take that. It means a lot to me. You know again I stay very firm. Myself and my husband, Adam Ginsberg, we really feel passionate about what we are trying to accomplish here. We already have said we want to try and get this to the point of being the Oscars for the genres community especially horror. This is how we do things. So it’s not only looking fabulous and walking the red carpet and having a fabulous evening but also the respect that we are presenting to the actual films that are screening. It’s very important that the sound be right, the screens are right and what we schedule to happen when it is suppose to happen and that’s it. Unless there is the unexpected Murphy Law situation the show will go on no matter what we will make sure that everything in the program happens. 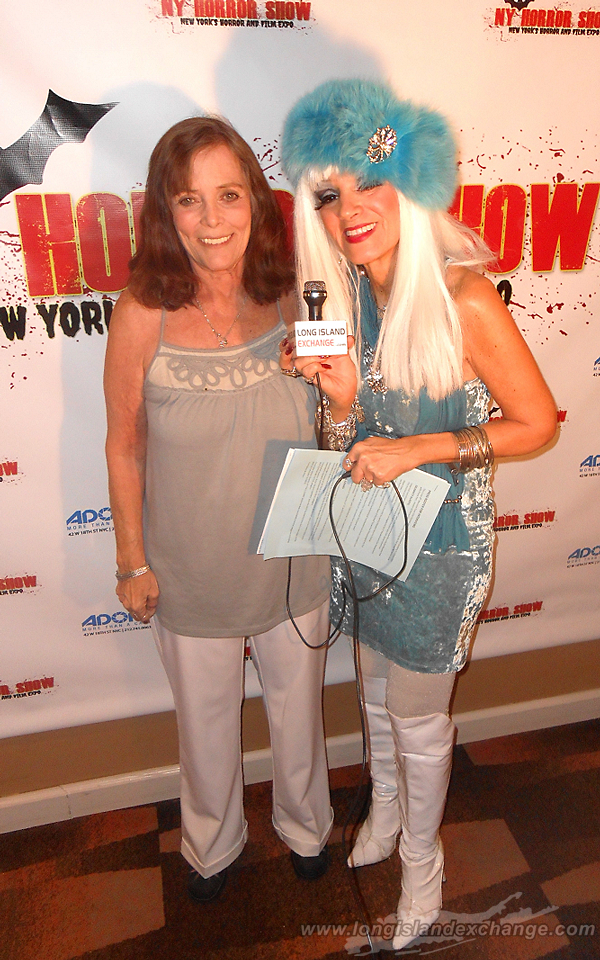 Actress Eileen Dietz from the Exorcist poses for a photo-op with Cognac Wellerlane at the Macabre Faire Film Festival on January 16, 2015.

Now I understand that you are going to have a roster of celebrities attending. Tell my audience who those fabulous people are going to be.

Elsie: Oh, we have a nice roster. We have Robert Mukes from “House of 1000 Corpses.” I cannot wait to see him and he is going to tower over us. He is almost seven feet tall.

Else: He is so handsome and he is so sweet. He is a great package. On top of that we are going to have Cleve Hall “Monster Man” SyFy Channel. He is coming in. Eileen Dietz, you spoke with her.

Elsie: She is back again. She is our film festival ambassador. So it’s important that she is here. We are going to have Elizabeth Shepherd. 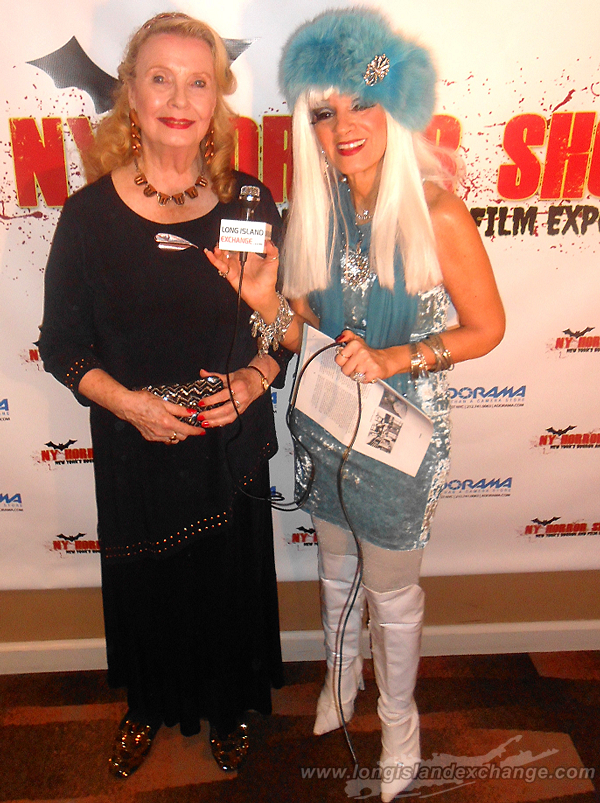 Actress Elizabeth Shepherd from Omen II poses for a photo-op with Cognac Wellerlane at the Macabre Faire Film Festival on January 16, 2015.

Yes, I want to interview her, Elizabeth Shepherd (Omen II)

Elsie: I have to tell you I am very excited about having her here because I love “The Omen,” I love “Omen II,” and I love “Omen III, The Final Conflict” and to know that we were able to get someone of that caliber to walk our red carpet I mean along with everybody else, I have this little special place to meet her.

Is Victoria Price going to be here?

Elsie: Well you know she has got a real job and when that knocks on her door she has to take care of business. So it kind of happened. Trust me I spent a lot of time speaking with her and we were suppose to meet up and talk about her father (Vincent Price), talk about the book that she has coming out. I just want to spend some time with her but she has promised that she is going to see about spending the weekend with us next year so it will happen. 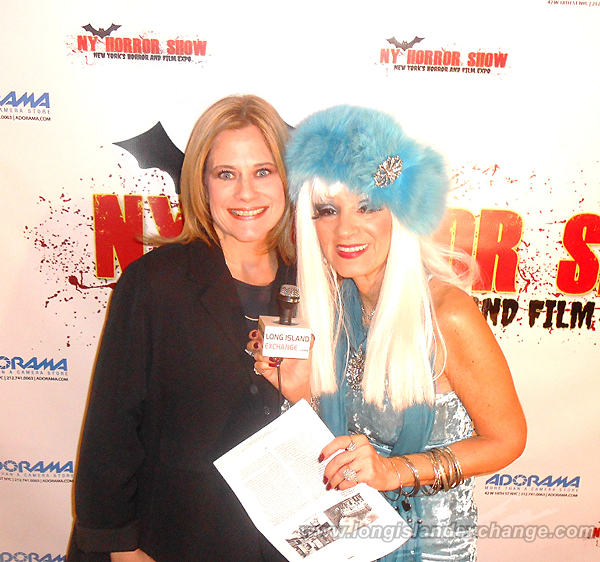 Lesleh Donaldson from Curtains and The Funeral Home poses for a photo-op with Cognac Wellerlane at the Macabre Faire Film Festival on January 16, 2015.

Elsie: We have a little dinner set up for them and then during the dinner we have a special screening of a short film called “The Secret” directed by Andrew Leckonby. He was one of our best short film winners a couple of years back. Unfortunately we lost Andrew in October and we were very saddened by it and even thinking about it now I, it’s a little hard to think about it. We wanted to do something special for him so we knew how much it meant to him to have his work seen so we decided that we were going to screen his short film here so that everyone can see it one more time. After that we are going to liven things up with a undead comedy show with Salvatore Rizzo. The Dead Father will be hosting a low rent version of the “Johnny Carson Show.” 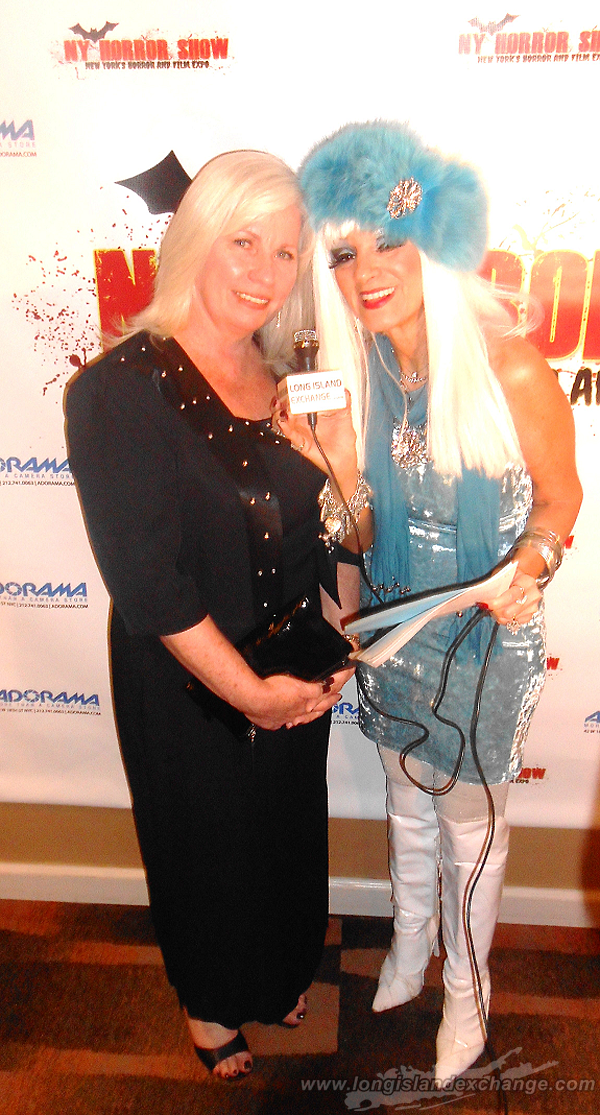 Sharon Lentz who played Sara Collins in Dark Shadows poses for a photo-op with Cognac Wellerlane at the Macabre Faire Film Festival on January 16, 2015.

Elsie: We try, we try. It means a lot to us. We respect the films. We respect the experience and we only hope that this is an infectious behavior what ever else you want to call it. We really want the filmmakers to feel the same way. A lot of filmmakers say “We love what we do,” love it even more. Love it even more and when you present it present it with the utmost pride and respect because I know that we are doing that for you so we hope you do it too! We are just ready to have a great time.

And so am I! Tell my audience where we can go to find out more information about The Macabre Faire Film Festival; what is the website?

Elsie: Please go to Facebook/Macabre Faire Film Festival. I am always reachable. Send a private message, send me an email. Whatever it is I am here. 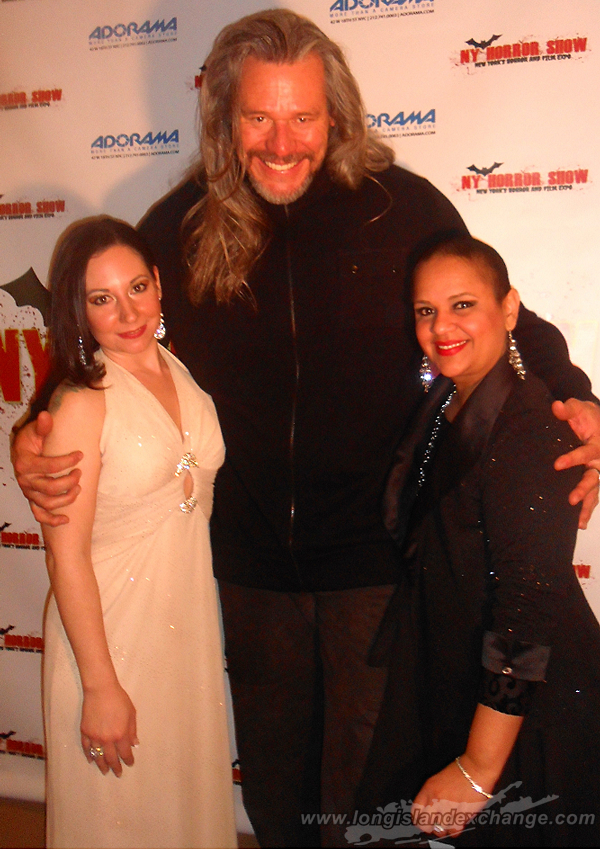 Macabre Faire Film Festival’s mission is to provide a respectful, competitive, celebratory and affordable film fest event that is judged by a panel for independent filmmakers to enter their Strange-ifical, Weird-ifical, Horror-ifical, Sci-fi-tastical, Fantastical and Macabre-licious films to be viewed by the fans with the opportunity to win awards, increase film visibility via press and possibly obtain distribution via the Festival’s Distribution Alliances on both the East and West Coast of the USA. All this while maintaining manageable entry fees.