(Long Island, N. Y.) One of my favorite films in the last few years (heck, possibly of all-time) is Neill Blomkamp“s

amazingly awesome 2009 writing/directorial debut District 9. A gritty, funny, and altogether mind-blowing and original sci-fi action movie set in South Africa, the independently-produced District 9 put Blomkamp on the map in a big way. I really can”t say enough about how good this movie is.

That said, the stakes were high when his second film, another sci-fi effort entitled Elysium, was announced, and after what seems like forever, it”s finally upon us. Now, I”ve tried to be realistic with my expectations – after all, people were expecting probably way too much out of Blomkamp for his debut with a major studio – but nonetheless, my expectations were met. Mostly,

Elysium, set in the year 2154, is the tale of Max Da Costa (Matt Damon) a guy living in Mexico, the squalor of Earth”s many disgusting slums, along with all of the other “Have Nots.” Meanwhile, the “Haves” live in orbit in a posh space station, the eponymous “Elysium,” where they have access to advanced medical pods that can pretty much heal any disease or injury (apparently even an exploded head isn”t too much for these things to handle). Earth inhabitants, with little access to

proper health care (sound familiar?), often attempt to “jump the border” into Elysium via outlaw shuttle-crafts; provided they aren”t shot down in the process, they then run into the nearest home and utilize its medical pod (using fake generic ID) to fix what ails “em, only to be deported right afterwards. It”s risky, but sometimes it”s the poor populace”s only choice to survive.

Max, a former gangster, is trying to get his life back on track by working in a robot factory, but after he receives lethal radiation poisoning from an industrial accident, he becomes obsessed with getting to Elysium and using their medical pods to cure his condition. In his bid for life, he joins up with his former gang and is outfitted with a powered exo-skeleton to aid in the violent theft of data from a visiting

Elysium resident overseeing business operations on Earth; once the mysterious data is retrieved, Max will be granted a one-way ticket to Elysium and salvation. However, the stolen data contains a startling secret, one that has Elysium”s Secretary of Defense Delacourt (Jodie Foster) pulling out all the stops to get it back…even going so far as to activate the deadly and ruthless Agent C.M. Kruger (Sharlto Copley), a loose cannon that commands a team of mercenaries under Elysium”s employ. 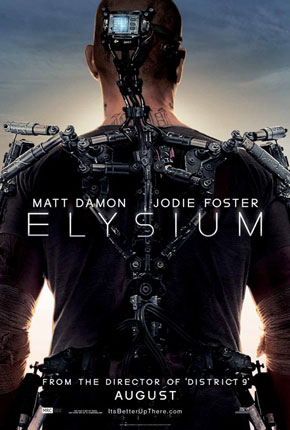 With all of this against him, and the complication of a childhood sweetheart getting involved in the mix, is there any chance that Max will make it to Elysium before his five days to live are up?

Elysium is really good. It didn”t completely blow me onto my backside like District 9 did – it”s not THAT good – but it was wasn”t a letdown, either. It featured a lot of great action scenes; innovative speculative future-tech; and rather biting social commentary that, while unfortunately not nearly as subtle as the messages presented in District 9, are still effective and, in this day and age of the Haves vs. the Have-Nots, very, very relevant. The message of the film wasn”t particularly heavy-handed for the most part…at least, until the very end, when it went into overdrive. I was slightly annoyed, but whatever; it could have been worse. Another minor complaint about Elysium is the toned down humor and emotionalism that were very much present in District 9; as a result, Blomkamp”s sophomore effort feels a tad dry. But only a

I”ve also seen complaints about excessive shaky cam, but I personally think it”s all overblown; I”ve seen way, waaay worse shaky cam in other films… Elysium wasn”t that bad in that regard at all.

Matt Damon, aside from being oddly miscast as online casinos a Mexican gang-banging car thief (huh?) trying to get on the straight and narrow, is otherwise excellent and proves that he”s still one of this generation”s most capable action stars who can also deliver a dramatic, nuanced performance as well. Jodie Foster plays a capable ice queen, showing a ruthlessness that we don”t normally see coming from her. Alice Braga and Emma Tremblay were okay, but not really needed in my opinion…they just formed the stereotypical duo of the mommy and daughter that the self-absorbed hero bonds with to learn selflessness. I”d love to see a movie without this plot element shoehorned into it in one form or another for once; a hero who is just a total jerk without any growth or arc that humanizes him would be awesome.

And Sharlto Copley as Agent Kruger…oh, man. Copley owned District 9 in its quirky lead role and, playing the exact opposite here as Elysium”s horrifyingly creepy villain, Copley owns yet another movie. This guy is the real deal, and I hope he has a long career ahead of him.

The visuals…well, it”s a Neill Blomkamp movie, and I think he”s using the same effect studios as he did for District 9, so yeah, it”s pretty, but in a way that runs against the usual “LOOK AT ME AND MY EYE-SEARING EFFECTS” offered by your average big-budget film. Blomkamp understands that the effects just supplement the action and, most importantly, the characters; so, in the case of Elysium, we get CG that compliments and supports the film as opposed to overpowering it. Everything is functional, and nothing feels inserted simply as a “wow” shot. But, just purely from a “wow” standpoint, the shots of Elysium itself are pretty impressive, and the robots pretty much blew me away- they”re obviously guys in green suits with extensive, photo-realistic CG laid over them, giving them a definite physical presence with the other actors that most movies lack.

a really good movie, but I think top honors for the Summer Blockbuster season have to go to Guillermo del Toro”s fantastic Pacific Rim, which was just as good in its own way, but holds the edge in being just plain old FUN. But really, two great, intelligent sci-fi movies in one summer season? The real winners are movie-going audiences, in my opinion; if you haven”t seen either of them yet (how is that possible?), go make a double-feature of Elysium and Pacific Rim. Trust me, your mind will be blown.