(Long Island, N. Y.) I like sci-fi, especially when it’s thought-provoking. I never read the original Orson Scott Card novel that Ender’s Game is based on, but that didn’t stop the twist ending from being spoiled for me by some inconsiderate denizen of the internet…a mere three word denouncement ruined everything for me. Lesson learned…if I want to go into a movie-watching experience blind, avoid the internet. Easier said than done, but people are jerks, man.

Anyway, Ender’s Game (both the book and the film adaptation) have been the target of gay rights groups due to homophobic remarks made by author Card in the media over the years, but from what I could tell, his ignorant sentiments don’t seem to appear in any form in the film, so that’s a moot point, I guess. The tale of an unusually gifted child who is sent to an advanced military academy in outer space to prepare for a future alien invasion from an alien race called the “Formics.”

Ender’s Game stars Asa Butterfield as Andrew “Ender” Wiggin, the aforementioned child who is put through the paces at the academy, enduring all manner of tests, simulations, and lessons to prepare him to the ultimate combatant in the upcoming war with an unspeakable alien threat. However, life at the academy is filled with all manner of trials, deceptions, and backstabbing, laced with mind games and conflicts with his fellow students; soon Ender questions what he’s actually being trained for to begin with- is he being bred to be humanity’s savior, or just a cold-blooded killer and pawn of the military? 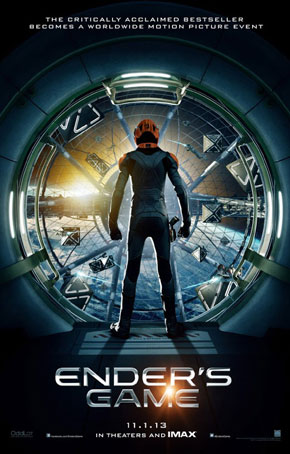 Ender’s Game, whose ensemble cast also includes Harrison Ford, Hailee Steinfeld, Viola Davis, Abigail Breslin, and Ben Kingsley, is a solid but overall unremarkable sci-fi film that’s probably getting more attention over the boneheaded remarks made by its source material’s author than its inherent quality. True, it’s got a hell of a cast, but honestly, when was the last time Harrison Ford wasn’t phoning in a performance for a quick paycheck? 16 year-old Asa Butterfield as the eponymous Ender acquits himself well, but overall, the film just feels flat, the characters bland and uninteresting, and – from what I’ve been told by those who have read the original book – the originally thought-provoking narrative is rather dumbed-down for the masses in favor of shiny CG explosions and action scenes.

However, things get more interesting as the film reaches its conclusion, but at that point I was so burnt out from the sensation that I was watching nothing but a glorified Nintendo game for the previous hour that I really had trouble caring one way or another. They say a good ending can salvage an otherwise bad or bland film, but when that ending has been spoiled by some dope on the Internet, even that can’t save the day. Of course, a twist is only good once; the film in question has to hold up to repeated viewings without its benefit. Ender’s Game really doesn’t.

So, overall, Ender’s Game is a solid but forgettable sci-fi romp (did I really just call it a “romp”? Oh man, what is wrong with me?), but unless you’re starving for entertainment, I’d advise you to save your hard-earned dollars and wait for Thor: The Dark Word, which opens this week. I’m sure it’ll be worth it.