(Long Island, N. Y.) First, I’d like to open this review to acknowledge the untimely and unfortunate passing of one of the true greats in my biz…Roger Ebert. You will be sorely missed, my friend. Evil Dead, the twisted z-grade 80’s horror flick that has enslaved generations of rabid fan-boys, launched a cult media franchise, and put director Sam Rami and geek icon actor Bruce Campbell on the map, has finally received the usual Hollywood remake treatment. It never ends, folks. It never ends.

However, whereas the typical remake treatment usually adds little or nothing to the pre-existing material (other than to needlessly tarnish its good name, in many cases), word on the street was that director and co-writer of the new Evil Dead, Fede Alvarez, was taking on the project with utmost seriousness
and reverence. After all, to the horror community, Evil Dead is an (un)holy thing. But while it was in production I kept hearing that Alvarez’s remake was eschewing fake-looking CG in favor of practical, physical effects and that atmosphere and true terror were his aim when it came to the crafting of the movie.

Despite being a major horror buff, I had never worshiped Campbell and Rami as reverently as others who dig all things dark and evil when it comes to celluloid (their films can be a little too goofy at times, in my opinion). However, when hearing how the remake was supposed to be turning out…my interest was piqued.

In the original Evil Dead, the premise was as simple as they come…a bunch of college kids head up to a deserted cabin in the woods to party, discover the mysteriously abandoned works of a professor deciphering an ancient evil book known as the Necronomicon, and unknowingly unleash a horde of demons when they play the tape recorder he had been using to transcribe the terrible text. One-by-one, the kids are possessed by the “Deadites” and basically tear each other to pieces, leaving only one survivor (Campbell, of course!). 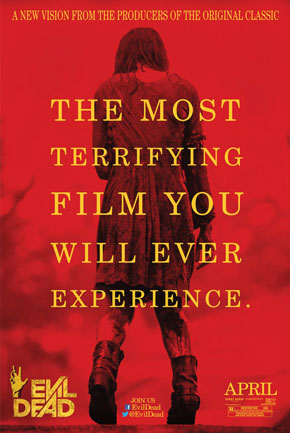 It was unoriginal on paper, but where Evil Dead worked so well was in the execution. Made by kids barely out of their teens, director Rami used a number of innovative and just plain nutty film-making techniques (in addition to bucket-loads of gore) to craft a horror flick that many now hail as a classic. While it was cheap and amateurish-looking, it also had a thick, creepy atmosphere of isolation and dread that proved very effective. Sequels would add more and more slapstick comedy, but the original Evil Dead remains a great horror film to this day, as its legions of fans will attest to.

Well, I just saw the remake…and it was just okay. The original was actually a much better movie (and I’m not even the biggest fan of it, so I’m totally impartial here). It was far more intense overall, and the Deadites were way, waaay more messed up and twisted. Don’t get me wrong…the remake isn’t horrible or anything. It’s just your average, generic modern horror movie with maybe a little extra gore than usual, that’s all.

The remake also had a few lulls in the action that killed the pacing. The film was gory as hell, and they thankfully used practical effects for the most part, but otherwise it wasn’t that great. Even the main plot driving the movie was stupid…instead of just going there to party, the kids are there to strand their junkie friend out in the middle of the woods so she can detox far away from any hospital with only an RN to look after her; some stupid kids just camping out to drink and fornicate was easier to buy, to be honest.

I could comment on the fact that the kids do all the usual horror movie nonsense – make stupid decisions, are vapid and underdeveloped, etc. – but that would be overstating the painfully obvious. It was in the original movie, so it’s in the remake, of course. But as a lady friend of mine stated after seeing the film, it’s just lazy scriptwriting and it always fails to endear you to the characters and, in turn, it fails to get you to care when they’re put in danger. If anything, filmmakers should challenge themselves by writing characters who actually AREN’T blithering idiots, yet STILL manage to get in danger. But I know, it would take actual work, so it’s never likely to happen.

I still can’t get over how ‘eh’ the possessed people were in the remake compared to the original. In Rami’s flick they were all rotted and deformed as well as being fairly fast and strong, whereas in the remake they were basically slow zombies with just a little blood on their faces and scary contact lenses. They also died way too easily compared to their 80’s brethren, who almost had to be messily reduced to their component molecules before they could be stopped.

The main thing the remake was missing that the original had in abundance was, simply put, “crazy.” Rami’s Evil Dead was crazy, whereas the remake felt…restrained. Gory, violent, but never out of control. However, in the case of some of the original’s “racier” content, that might actually be a good thing. I’m sure those who have seen the first movie know exactly what I’m talking about.

Of course, the remake has a few pluses…the practical gore effects were refreshing in this day and age of video-game blood and entrails, and there were a few genuinely creepy moments sprinkled about. But the uneven pacing and interchangeable characters really worked against the film at every opportunity.

I love horror movies, but I can’t think of the last modern one that I thought was legit scary; the Evil Dead remake sure wasn’t. I’m not sure if I’m desensitized to the whole horror movie thing these days (I hope not!), but in my opinion, you’re better off just renting the original and enjoying it in the safety of your own home, where evil remakes can only cross your doorstep if you allow them to.