(Long Island, N. Y.) I love the Fast & Furious series. Yeah, some people think of it as the cinematic equivalent of the sneeze guard at the local family all-you-can-eat buffet, but I personally turn my nose up at such snobbery. These movies are dumb, cheesy, crazy fun, each and every one of them, and I have found an enormous amount of entertainment out of this outlaw street racing series, which somehow manages to ramp up the action and outlandishness with each successive entry, and yet still retains a huge degree of charm and personality throughout the carnage. I hope they go on forever.

After starting out as a simple underground street racing/heist caper story in the first film, each new film in the series has upped the ante with crazier stunts, more complex heists, hotter women, gobs of international intrigue, and more and more wonton destruction than ever thought possible in a film not featuring tactical nukes; a fond favorite scene of mine in film history remains the part in the fifth movie where protagonists Dom and Brian basically annihilate Rio by wielding a massive safe attached to their cars via cables like a giant medieval mace. It’s glorious, man.

But while the capers and stunts have gotten increasingly insane, the Fast & Furious films remain grounded by its cast; Dom (played

by Vin Diesel, who is awesome) and company have, throughout the series, remained likable, funny, and realistic, which helps the viewer buy into it when they corkscrew jump a car over 14 buildings and land safely on a moving boat that’s on fire…okay, THAT never happens in this series, but after the wacked-out finale of F&F6, they’ll probably have to do something like that in the sequel (Faster and Furiouser? Fastest and Furiousest?) to maintain the status quo. And I’ll love it.

Among the new blood to the franchise, Luke Evans was a solid main bad guy, and there were some great appearances by MMA star-turned actress Gina Carano (Haywire) and Indonesian break-out star Joe Taslim (The Raid: Redemption). The film also rather brilliantly ties itself into The Fast and the Furious: Tokyo Drift, the only installment of the series whose chronological order was in question (until now, that is).

In Fast and Furious 6, our gang of racers and outlaws lead by Dominic Toretto (Diesel) have split up and retired after pulling off a $100 million dollar heist from a sleazy drug lord in the previous movie; however, Luke Hobbs (Dwayne Johnson, whose bad-ass character is a lot of fun), a Diplomatic Security Service agent hot on Dom’s trail, tracks him down and makes him an offer- full pardons for him and his crew if they help take down an international terrorist gang lead by Owen Shaw (Luke Evans). Hobbs sweetens the deal with a recently-taken picture of one of the members of Shaw’s gang Letty Ortiz (Michelle Rodriguez), Dom’s long-lost love previously thought dead. 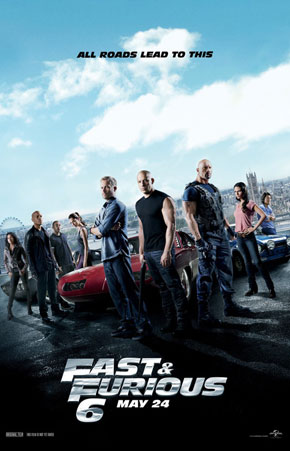 Determined to not only give his team, whom he considers family,

a chance to return to their homes instead of living on the lam, as well as an intense desire to solve the mystery behind Letty’s re-appearance, Dom accepts Hobbs’ deal and once again gathers his friends, who are among the greatest drivers and criminals in the world- former FBI agent-turned fugitive Brian O’Conner (Paul Walker); street racer Roman Pearce (Tyrese Gibson); tech guy Tej Parker (rapper Chris “Ludacris” Bridges); calm and cool gangster Han Seoul-Oh (Sung Kang); and Han’s gun-toting girlfriend, Gisele Yashar (Gal Gadot).

Together, they team up with Hobbs and his tough sidekick Riley (Carano) to win their freedom and discover why Letty is up and walking around instead of taking a dirt nap. However, Dom and his crew have never faced a threat of Shaw’s magnitude before, and soon they and their loved ones face his dangerous reprisals. Before the movie ends, stuff blows up, rubber is burned, over-the-top stunts are performed (honestly, this is a series that somehow keeps managing to top itself), and you’ll likely be having a bloody fantastic time throughout it all.

So, if you’re a fan of the series, you’ll love Fast & Furious 6; if you don’t consider yourself a fan, but enjoy a well-made action flick with loads of personality, you’re doing yourself a disservice by skipping it. So, instead of popping on your fedora and traipsing down to the local art house cinema in your hybrid/electric vehicle to take in the latest subtitled Italian romance, take a chance and have some ‘guilty pleasure’ quality fun with Fast & Furious 6 instead. You won’t regret it.

By the way, stick around for the “shocking” mid-credits sequence that sets up the villain for Fast & Furious 7…in this day and age, I’m not sure why people aren’t programmed now to wait until the credits are over in movies of this type, but just in case, I thought I’d share this advice. Besides, the scene takes place pretty early into the credits, so you won’t even have to wait that long, and trust me, it’s worth it.