(Long Island, NY) When I asked my 11-year-old son where he wanted to eat his big birthday dinner, he didn’t flinch. It was BBD’s, a hip new restaurant in Rocky Point… for the win.  An acronym for Beers Burgers Desserts –the restaurant is a dynamic new approach to the neighborhood hamburger bar. Putting an innovative spin on America’s beloved burger, the folks at BBD’s grind and patty all of their meat in-house and offer three different cooking methods for guests to choose from: grilled, griddled and steamed. It’s my family’s new  favorite place to break bread. (You must, must, must try the Bavarian Pretzel appetizer!) 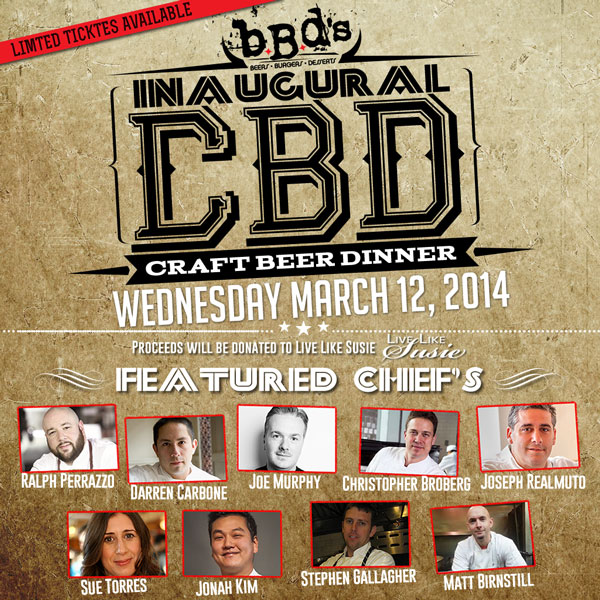 With a 30-foot bar, BBD’s extensive beverage program offers 22 draught taps and dozens of bottled selections.  They choose to highlight local craft brewers with some of  their favorite beers from around the country and the globe. BBD’s is  also are one of the first restaurants in the country to offer six whiskey and bourbon draught taps; served as a ‘Whiskey Block’ on perfectly cubed ice or in one of their adult milkshakes! Oh and the desserts are to die for.  BBD’s is the brilliant brainchild of Chef Ralph Perrazzo, a native Long Island resident. Perrazzo’s concept for a restaurant focuses on the things he loves, BEERS, BURGERS and DESSERTS. BBD’s quickly becoming a Suffolk County hotspot and snatching up lots of accolades and top honors. The buzz is, in my opinion, truly well-deserved.  If you’re on the hunt for a fabulous dinner for everyone in your family, this is the place.

Something you might want to put on your calendar where you can eat and drink like a king for a good cause: BBD’s is proud to present its first  BBD’s Inagural Craft Beer Dinner  Wednesday, March 12, 2014 for a one-of-a-kind food and beer extravaganza.

BBD’s Chef and Owner, Ralph Perrazzo, has asked his talented friends to come and cook a special dinner just for you.  9 Chefs and 9 Breweries will present their food and beer for this inaugural event.  Enjoy passed hors’ d oeuvres and a 7 Couse Meal with beers to match.

All proceed will go to Live Like Susie (www.livelikesusie.org), a local scholarship program.