(Long Island, N. Y.) There’s something horrible yet riveting about watching a man’s slow, inevitable, and self-inflicted decent into his own personal hell. Flight, a drama film directed by Robert Zemeckis and featuring an ensemble cast including Denzel Washington, Don Cheadle, Melissa Leo, Bruce Greenwood, Kelly Reilly, and John Goodman is one such harrowing but ultimately emotionally absorbing experience, and one I absolutely suggest you take on yourself.

Washington plays airline captain William “Whip” Whitaker, a pathetic wreck of a human being that nonetheless manages to bed super-hot stewardesses and successfully crash land a malfunctioning passenger plane while drunk and coked up out of his mind, saving 96 of the 102 people on board. As a result, Whitaker is hailed as a hero, although an investigation into his actions threatens to expose him for the degenerate that he is and land him in jail.

However, it must be pointed out that the crash of the plane under his command was in no way due to his inebriated stupor; in fact, in the ensuing investigation, it’s proven via simulated crashes piloted by ten other captains that the fact that Whitaker was able to successfully land the plane without splattering the passengers and crew was not only an incredible feat, but an almost impossible one. As evidenced by this, as well as the great deal of drunk automobile driving he does throughout the remaining course of the film, it seems that Whitaker is the only man on Earth that operates vehicles BETTER when smashed off his derriere. It’d be impressive if it wasn’t so disgusting.

The crash itself happens early on in the film, and is easily one of the most intense and frightening scenes out of any movie that I’ve seen in quite some time. Whitaker wakes up drunk the day of the flight, snorts cocaine to sober up and, after taking off in the middle of a violent storm, provides informative in-flight announcements to the passengers while discretely mixing a Screwdriver for himself at the same time. It’s impressive, actually! And, after chugging the vodka and OJ concoction, he dozes off while his co-pilot takes over piloting duties. 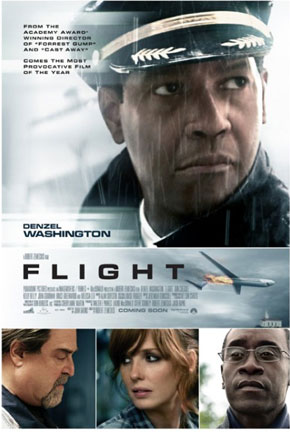 Later, nap-time is interrupted by a mechanical failure and, via some deft and innovative flying, Whitaker glides the plane into a meadow with a minimal loss of life and only minor personal injuries. Over the course of the investigation that follows, Whitaker is commanded by his company’s defense attorney, Hugh Lang (Cheadle), not to drink; it seems that the airline knows Whitaker is a boozehound and is doing their best to cover it up…up to and including Lang getting a toxicology report deemed inadmissible by technicality.

However, going off the sauce isn’t easy for an addict like Whitaker, whose problems with alcohol had previously cost him his relationships with his wife and son; he moves to his late father’s abandoned farmhouse to get out of the media eye and proceeds to get into a relationship with a heroin junkie, consumes gallons and gallons of booze, and harasses his former family. Swell guy, right?

Whitaker is clearly a man who is out of control, and continues to spiral further and further down into depravity and damnation throughout the course of the film. With the big investigative federal hearing into the plane crash looming closer every day, will Whitaker be able to not only maintain his image as a squeaky-clean hero and avoid jail time, but even remain alive?

Denzel Washington, simply put, brings it big time here. His portrayal of a man enslaved by booze to the point where he is helpless to do anything but drink, even when it’s obvious that it’s killing him and destroying his life, is nothing short of amazing. Flight is worth seeing for his performance alone, but it helps that he has an equally impressive cast backing him up. Melissa Leo, who plays Washington’s love interest, is a standout, as is Don Cheadle, who is unfortunately underused in his role as a legal shark hired to clear Washington’s character of any wrongdoing; obviously, he has his work cut out for him.

Bruce Greenwood and John Goodman round out the impressive acting on display, but Washington…wow. Just when you think his character can’t sink any lower he does, and yet he still manages to play the role with enough emotional nuances and humanity that you still find yourself rooting for him…even when he lets you down over and over again. It’s heartbreaking and yet fascinating at the same time.

Flight is a must-see, and one of the best films not only of the year, but of Washington’s career as well. Highly recommended.