Tomorrow morning, Mariah fans need to get themselves to Times Square for the Friday, April 25th LIVE performance for Good Morning America. Seating for fans is free and will be available, although on a first come first serve basis, which means those looking to attend the show will want to rise and shine and get to Times Square very early to ensure they snag a good spot to watch Mariah perform.

The show takes place at 44th Street and 6th Avenue at 6 am on the dot where fans will be lined up and escorted to the audience section. Expect to be available from 6-9 am on Friday, April 25, to attend the concert.

This live performance is the best way for Mariah fans to see her live and in person and best of all – for free! Attendees will see her performing music from her new album E=MC². 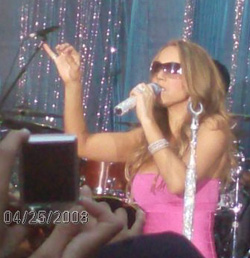 Mariah is accustomed to success and her new album E=MC² is certainly destined to do well. It has already reached #1 and she passed Elvis Presley’s record of 17 #1 songs with her 18th #1 song “Touch My Body”. “Bye Bye” also appears to be doing well and reaching #1 status! Her new album has been in stores since April 15th. She will no doubt be performing her top songs “Touch My Body” and “Bye Bye.”

Her appearance on Good Morning America is not her first public appearance for this new album. In fact, she has been making appearances non-stop to promote her new release. You have probably seen her on “The Hills”, “IDOL Gives Back” and “American Idol”, “Saturday Night Live”, and “The Oprah Winfrey Show” just to name a few.

All of these appearances have worked well for the international superstar because as album has had the biggest debut week in her entire career. That says a lot for her new album and should defiantly increase the interest in her free concert on Saturday. There will certainly be people lined up around the block so to ensure you get to see the concert you might even want to make a night of it.

Antonio ‘L.A.’ Reid, Chairman, Island Def Jam Music Group said, “Mariah’s an inspiration, the true definition of a star. She continues to amaze us with every incredible new album she creates. Now Mariah has added another plateau of success to what has become her virtually unapproachable track record on charts around the world. She proves beyond a doubt that with talent, ambition, and sheer force of will, all things are possible.”

If the free concert is too early in the morning for you or if you want to see more of Mariah on Friday then try and get tickets for Live with Regis & Kelly where she will be making an appearance after the concert.

Mariah is certainly a superstar and her fame and success are only continuing. She is the only person on the Hot 100 who could possibly reach the success of the Beatles with 20 #1 hits.

Producers of the New Album

Her last album was The Emancipation of Mimi and it sold more than 10 million copies worldwide. She also received three Grammy awards for the album, had two #1 singles, as well as other honors. The album was on the charts for 18 months and made her the top selling female artist in history with more than $160 million in sales.