(Long Island, N. Y.) Growing up in the 80’s was a great thing…entertainment in that day exposed children to endless amounts of violence, blood, and wanton destruction, and nothing epitomized that more than Hasbro’s awesome GI Joe toy line and cartoon series. I loved it then, and I love it now.

GI Joe, originally starting out as a line of 12-inch army dolls in the 1960’s, was updated and re-launched in the 80’s as a scaled-down 4-inch line

of action figures reflecting a modern, high-tech fighting force of military specialists assembled to fight Cobra, a “ruthless terrorist organization determined to rule the world.” Being the maladjusted sociopath that I am, I more often than not sided with Cobra and their clandestine leader, Cobra Commander, but overall, I loved the franchise to death, and continue to collect it to this day.

So, when the live-action film adaptation of the franchise debuted in 2009, entitled G.I. Joe: The Rise of Cobra, I was understandably excited, to say the least. That is, until I watched it.

Obviously directed by a hired gun that clearly didn’t “get it,” Rise of Cobra reduced the colorful personality of GI Joe into a cheesy, generic action flick, and it was slammed by both fans and critics. However, most likely thanks to nostalgia, the film managed to make enough dough to warrant a sequel, but it was clear that this next installment would be a make-or-break deal for the future of the series.

director John Chu (whose previous credits include a Justin Beiber documentary that was actually critically acclaimed…now THAT takes talent!) managed to make an early positive impression on fans with a strongly-professed childhood love for GI Joe, as well as some impressive preview footage that drastically seemed to change the look and tone of the first movie, bringing it more in line with the classic Joe look and feel that fans craved. Finally, it seemed, someone got GI Joe right.

However, fans would have to wait a little longer than first anticipated after a last-minute false start on the part of the studio, who decided to pull the film from release less than a month before it was due to premiere for a nine-month 3D conversion.

But GI Joe: Retaliation is FINALLY here, and the question must be asked: was it worth the wait?

It sure was. Yes, it has some flaws, but overall, old-school GI Joe fanboys (as well as new recruits to the cause) finally have the live-action film they’ve been dreaming of since they first opened the packaging of their very first figure.

Retaliation functions as both a sequel and a reboot as it relates to Rise of Cobra; director Chu and writers Rhett Reese and Paul Wernick managed to jettison most of the objectionable and outlandish material from the first movie for the sequel, grounding the movie more in reality and interjecting much of the personality and individuality that the characters were previously lacking.

The story of Retaliation hinges on one vital plot point carried over from Rise of Cobra: Zartan (Arnold Vosloo), the evil master of disguise who is impersonating the President of the United States (Jonathan Pryce), orchestrates a plot to frame the GI Joes as traitors and orders a surprise military strike on them to wipe them out. Believing the only ones who can foil the plans of Cobra to be dead, Zartan enlists the ninja Storm Shadow (Byung-hun Lee) and the mercenary Firefly (Ray Stevenson) to rescue their leader, Cobra Commander (Luke Bracey), from a government penitentiary. With the Commander now free and pulling the strings in Washington, the outlook for the safety of the free world is looking pretty dismal. 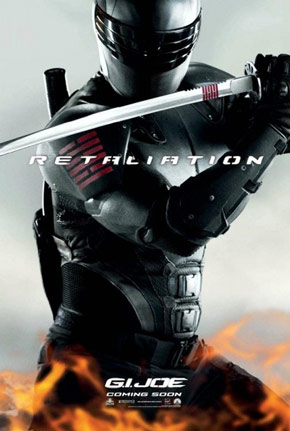 However, there’s one thing the forces of Cobra didn’t count

on- there are surviving GI Joes. Roadblock (Dwayne Johnson), Flint (D.J. Cotrona), and Lady Jaye (Adrianne Palicki) managed to survive the massacre of their comrades, and covertly turn to retired General Joseph Colton (Bruce Willis) for help in their desperate counterattack. In addition, another Joe, silent ninja commando Snake Eyes (Ray Park), sets out to track down Storm Shadow, a fellow member of his Arashikage ninja clan, to answer for his crimes and to discover Cobra’s plans.

However, with Cobra set to disarm the world’s nuclear arsenal and introduce a devastating super-weapon of their own, are a mere handful of surviving GI Joes enough to prevent global destruction, especially with a naughty dude like Cobra Commander calling the shots?

GI Joe: Retaliation was a damn good movie. It’s not perfect…the flow of the story felt a tad disjointed at points (the Zartan/Storm Shadow connection was HORRIBLE), and I felt that it could be a little confusing for people who either hadn’t seen the first movie or weren’t familiar with the overall story of the comics. Also, since this is a story about the Joes knocked down and on the run, there was plenty of great action, but not on an army vs. army scale like they had in the comics and cartoon- I missed that a little. But otherwise, Retaliation was easily 10,000,000 times better than Rise of Cobra.

Retaliation is fast-paced and fun, with a lot of action and personality, some well-placed snippets of humor, and a great grasp of the nuances that made the modern era of GI Joe connect with fans worldwide for over 30 years and going. One action scene in particular – the ninja mountain battle scene – is easily worth the price of admission alone. And while I wouldn’t say that there’s any real character development or depth to the story, the Joes for the most part are likable enough, and the Cobras a dastardly bunch.

Also of note is the 3D conversion process the film was put through; despite not having been shot natively in 3D, the post-production work was done right, resulting in a movie that actually looks fairly impressive when you’re wearing those funny glasses. Some action scenes blur, of course, but overall the 3D effect is good and adds to the proceedings.

The tech level of Retaliation is firmly based in the modern day, unlike the crazy sci-fi ray guns and nanotechnology featured in Rise of Cobra, but there are enough advanced weapons and vehicles (including a variation of the iconic HISS tank!) on display to keep with the usual cutting-edge “near-future” Joe aesthetic.

Cobra Commander, woefully misrepresented in the last movie, was so improved this time around that I was actually annoyed that he wasn’t in the movie nearly as much as I would have liked. He costume, now very reminiscent of his classic trademark mirrored battle helmet (instead of the bizarre goldfish bowl he was saddled with on his mug in Rise of Cobra) was quite badass, and the voice they used for him was great…it reminded me of the “where’s my cake…?” zombie in the first segment of Creepshow. Good stuff.

Firefly was really cool as well, but pretty much anything Ray Stevenson does is good, so whatever. Byung-hun Lee picked up his game from the previous movie to a huge degree, although his character of Storm Shadow also suffered a bit from some bad script issues, which we’ll get to in a moment. Oh, and Jonathan Pryce as the fake President nearly stole the whole show.

Johnson as Roadblock was good, Adrianne Palicki Lady Jaye was good (although predictably used for cheesecake factor), and D.J. Cotrona as Flint was…kinda bland, actually. Bruce Willis had a somewhat larger role than I expected (I really just thought he would have a small cameo, despite being plastered all over the promotional materials), and appeared to be enjoying the role. Ray Park as fan-favorite Snake Eyes owned the movie, and his armored black ninja costume was far better this time around…his mask no longer sports the goofy big rubber lips it did in Rise of Cobra, thankfully.

The only really two glaringly bad things about Retaliation…the first was Wu-Tang rapper RZA, who played the Blind Master, the Arashikage ninja clan leader. RZA is seriously the worst actor in history and ruined every scene he was in; between this and The Man with the Iron Fists, it’s more than clear that he’s far better at scoring movies than actually acting in them.

Oh, and the other major flaw in Retaliation is a convoluted Zartan/Storm Shadow storyline, which was horribly done to the point that people in the audience I was at were actually throwing up their arms in confusion. I know it was thrown in as a bone for fans, but it’s possible to do that and have it actually make sense. Just some really bad writing, there.

Otherwise, GI Joe: Retaliation is a great action movie and a major shot in the arm for the franchise. Considering the fact that it opened at #1 at the box office and had already amassed $132 million worldwide during it’s opening weekend, a sequel has already been announced, and I for one can’t wait.