(Long Island, N.Y.) Hello, children. Today’s review is Ghost Rider: Spirit of Vengeance, the Nicolas Cage-starring sequel to 2007’s Ghost Rider, itself a Marvel Comics-based tale of a stunt motorcycle driver who becomes possessed by a demon and the shenanigans that ensue. Now, I’m pretty sure I wrote a review for 2007’s Ghost Rider back in the day. Hold on a sec, let me check my review archive… Looking… Okay, turns out I DID review it. Let’s refresh ourselves and re-read it…

Hmm…okay. Turns out I gave Ghost Rider an average, two-star review. If memory serves, I recall it being somewhat entertaining and fun yet cheesy and forgettable at the same time. I can also say that the sequel, with Cage reprising his role as the flaming (literally as in “on fire,” not…oh, never mind), skull-faced agent of Hell out to punish the wicked (why would an agent of Hell punish the wicked?), is pretty much inferior in every way. In fact, if I had to sum it up in one word, that word would have to be “boring.”

If you didn’t see the original, don’t fret- Ghost Rider: Spirit of Vengeance does a fine job of recapping its origin tale: stuntman Johnny Blaze (Nicolas Cage in his usual full-on psycho mode) is bummed out ’cause his dad is dying of…I don’t remember of what, but he’s dying, and Johnny is bummed, like I said. Satan tells Johnny that he’ll save his dad if he signs over his soul, which Johnny stupidly does. Dad dies anyway, and Johnny is, once again, bummed. That is, until Satan sticks a demon into Johnny’s body that causes him to transform into a fiery skeleton biker dude known as the Ghost Rider whenever evil is afoot, bringing punishment and retribution to those who do wrong. This, as I pointed out earlier in this review, makes no sense. I mean, shouldn’t Satan want Ghosty to strangle puppies and bad stuff like that? I don’t get it.

Anyway, a million superhero movie clichés later, and we find ourselves in sequel-land. Johnny has moved to some remote part of Europe to keep humanity out of harm’s way of his sinister alter-ego (even though he just punishes the naughty). However, in a rather bland affair, we discover that Satan has fathered a human son and now seeks to pass on his powers and life essence to this child so he can walk the Earth with all of his dastardly powers intact for the first time ever. Some guy finds Johnny, tells him if he saves the kid his peeps can remove his curse, Johnny accepts, is betrayed, loses his powers, blah, blah, blah. If it wasn’t for the fact that I had to keep rousing my friend from his slumber over and over I might have fallen asleep in the theater as well while watching this. 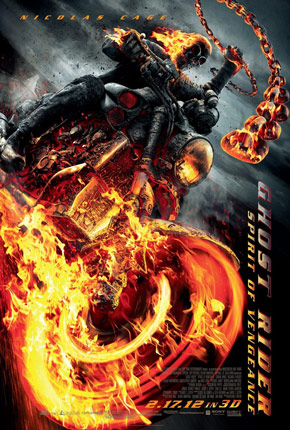 Ghost Rider: Spirit of Vengeance was directed by Mark Neveldine and Brian Taylor (the duo responsible for the bat poop-crazy Crank movies), yet their usual manic style is restrained during this particular outing by a PG-13 rating and a rather lame script. Liberal amounts of inspiration seems to have been taken from Terminator 2 in regards to the overall feel of the film, its settings, and even the bonding between Johnny and the cardboard cut-out kid, but it’s nowhere near as exciting or as cool as when James Cameron did it back in 1991.

Honestly, I really did find Spirit of Vengeance to be a bit tedious. There are long, bland stretches between the action scenes, but when one finally shows up, they’re usually somewhat awkward and unsatisfying. Ghost Rider’s rather boring methods of attack seem to consist solely of whacking people with chains (causing them to turn to ash) or staring into their eyes while holding them close, like a gentle yet firm lover. I think he’s supposed to be eating their souls when he’s doing this, but there’s this one scene where he does it to this guy for what feels like ten minutes, tenderly cradling his face in his hands all the while, and it comes across more like a weird love scene than anything else. But at least the part where he transforms some giant piece of construction equipment into a fiery death machine was pretty cool.

As for the acting, Nicolas Cage seems to understand the public’s view of him being a weirdo who spends most of his screen time screaming and generally being bonkers, and does his best to live up to that rep here. It comes across as quite forced in this instance, actually. Christopher Lambert pops up in what amounts to a cameo, and is completely wasted. I read on Wikipedia that he had to undergo three months of sword training for his part in the film, which amounted to raising a sword above his head and then NOT swinging it. Oh boy! No one else in the cast really stands out in any way at all except Idris Elba (who plays a Frenchman who, of course, loves wine), who should be starring in better movies than this.

Visually, the effects work is solid but not remarkable. Ghost Rider’s flaming skull looks pretty good most of the time and little touches like the surface of his leather jacket and pants bubbling from the heat he gives off are kinda neat. But the physics of his chain attacks are just wonky-looking and Ghosty himself doesn’t always gel with his live-action surroundings; I seem to remember him looking a bit more realistic in the original movie, although I do dig his grittier, grimier look this time around.

Oh, and the showing I watched was in 3D, but the 3D effect in this movie is completely non-existent, worthless, and not even remotely worth the small fortune that it adds to your ticket price. I CAN NOT wait for this stupid 3D gimmick to end, and the sooner it does, the better. So, if you loved, loved, loved 2007’s Ghost Rider and have been waiting for what seems like ages for a sequel, I can’t say your wait was worth it. Spirit of Vengeance is plodding, nondescript, and most of all, not fun. Skip it.