(Long Island, N. Y.) Wow. This movie came out of NOWHERE. Well, at least for me. In this day and age of the Internet where films are spoiled left and right months and sometimes even years before they’re released, I can’t believe I didn’t hear anything leading up to the initial trailer of Gravity, directed, co-written, co-produced, and co-edited and directed by Alfonso Cuarón, perhaps best known for directing some of the better-received Harry Potter films.

I saw that first cryptic trailer, and was blown away

by how tense and intense it was, while really showing almost nothing about the film it was advertising. Sandra Bullock and George Clooney were in space, wearing astronaut suits, obviously lone survivors of some sort of unfathomable accident. They were surrounded by floating debris, Bullock spinning out of control into the nether while creaming and pleading for help; the horror of her situation made all the more gripping by the fact that there were no sound effects (it IS space, after all);

just her frantic voice punctuated by her frantic hyperventilating and Clooney’s voice urging for her to hold on as she spun out into the void.

It was a trailer that told everything and yet nothing about the film at the same time, and it really ran in contrast to most modern trailers that spoil all the best bits about a movie before you even have seen the thing. And after seeing it, I knew I had to experience Gravity for myself.

I honestly don’t want to tell you anything more about Gravity, as going in knowing as little as possible will only enhance your viewing pleasure; however, I’ll give you a little more. Just a little. 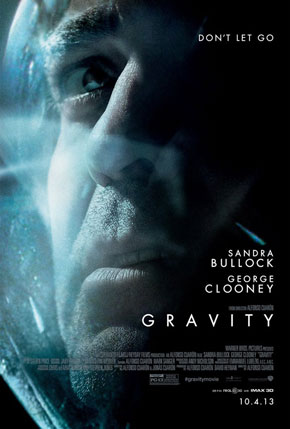 Dr. Ryan Stone (Bullock), a bio-medical engineer, is on her first space shuttle mission; astronaut Matt Kowalski (Clooney), who is commanding the shuttle Explorer, is a veteran who is on his last. Stone, while spacewalking over to the Hubble Space Telescope, has her tether severed by debris from a Russian anti-satellite test accident and finds herself tumbling out of control into open space. Kowalski rescues her with the aid of a thruster pack on his spacesuit, but upon returning to their point of origin, they discover that the Explorer is effectively destroyed and their crew-mates dead.

Their only hope is to navigate to the International

Space Station, which is 100 kilometers away; however, that pesky Russian space debris is in orbit and the duo only has 90 minutes before it hits them again; this time, they might not make it out alive.

It sounds simple, but there’s so much more to Gravity than that brief plot description; it’s a character study of sorts, set in the vastness of space, and the supreme acting abilities Clooney and Bullock put on display here are a huge part of what makes it so gripping. These two are fantastic together, and they’d better be; for most of the film, they’re the only two actors who appear (others are

heard via radio communications, but not seen). They take a concept that might fall apart in the hands of lesser actors and…well, again, they’re fantastic, and in turn, they make the film fantastic as well.

It also helps that director Alfonso Cuarón is a massively talented individual who knows how to craft an intense, harrowing scene of horror while getting you into the head and emotions of the film’s protagonists; the fact that he can interject such compelling humanity into scenes like this really drives home what a master of his craft he is.

Also of note are the effects and cinematography- this is probably the best representation of film space that I’ve ever seen; it’s totally, 100 percent convincing and

completely crazy and disorienting, as being in actual space would most likely be when there truly is no “up” and “down.” This aspect of Gravity is just masterfully, masterfully done, and heightens the tension to a monolithic degree.

Also, be sure to see Gravity in a theater with a solid sound system, as the sound work is half the and really sells the feeling of isolation endured by the leads, and if you have the ability, I urge you to see Gravity in IMAX for maximum immersion and disorientation. I often consider IMAX a gimmick and not much else, but with the right film, it can be mind-blowing; it is so with Gravity, as several people actually seemed to have trouble walking out of the showing I attended.

Any film that can do that gets a thumbs-up from me. Get out there and see this. Now.