(Long Island, N. Y.) Every now and again, you’ve gotta unwind with a fun garbage movie. That’s basically Hansel and Gretel: Witch Hunters in a nutshell. Wait…in a nutshell? I know clichés are often inane and obscure in their meanings, but I’m not even 100 percent sure what “in a nutshell” means, aside from it denoting the entirety of a subject in a brief description. Anyway, I’ve got to stop saying that. Clichés are silly.

Anyway (which is a word I use in practically every review I write, making it my own personal little cliché, I guess), Hansel and Gretel: Witch Hunters is an action/horror flick based on the classic Brothers Grimm fable about two kids who have to contend with an evil witch after wandering into her gingerbread house in the middle of the forest. However, this version, written and directed by Tommy Wirkola and starring Jeremy Renner (Avengers, The Bourne Legacy) and Gemma Arterton (the dopey Clash of the Titans remake), has been given a modern overhaul; now Hansel and Gretel are the bad-ass, leather-clad, weapon-touting witch hunters referenced by the film’s title. On paper, the premise is even more stupid than the recent “Abraham Lincoln: Vampire Hunter” movie (maybe? That’s debatable, actually), but in reality, where as that train wreck suffered from taking itself way too seriously, Hansel and Gretel embraces its inherent camp

value, turning the proceedings into a black comedy of sorts. No, it’s not well-written, and it’s pretty

stupid at times, but I’d be lying if I said it wasn’t also a lot of fun as well.

The plot, such as it

is, is pretty simple: an evil coven of witches, lead by Muriel the Candy Witch (Famke Janssen of X-Men and Taken fame), are threatening humanity, and Hansel and Gretel, who have grown up into witch bounty hunters as a result of having previously encountered Muriel as children (as a nod to the original Grimm Brothers tale), decide to take on the job of taking down Muriel once and for all. There’s a tad more to the plot than that, but really…not much more. What’s important, however, is that a great deal of campy R-rated violence mixed with bizarre fairy tale-inspired humor (yes, there actually IS a gingerbread house in this movie) follows, which isn’t a bad thing at all, in my opinion. Film snobs might turn up their noses at such silly, bloody debauchery, but every now and then you need to watch a good/bad movie. It’s important for your sanity, in my opinion. 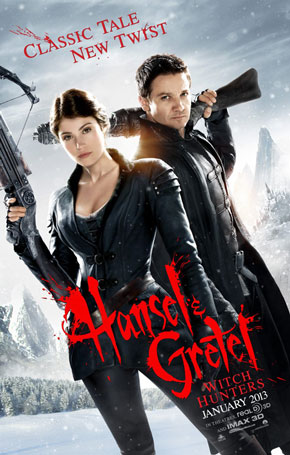 I’ve become a recent fan of Jeremy Renner after his performances as the superhero Hawkeye in The Avengers and rough secret agents in The Bourne Legacy and Mission Impossible: Ghost Protocol. He’s proved himself to be a thoughtful, versatile actor with what it takes to handle an action role, and while I initially thought he was slumming for a paycheck when I first saw the trailers for Hansel and Gretel, I now realize that he actually has a sense of humor as well, which he conveys effectively on-screen as Hansel. Gemma Arterton is solid as Gretel and Famke Janssen is a convincingly evil vamp as Muriel, but honestly, this is Renner’s show, and he makes the best of a role that sometimes requires him to

say and do some pretty dumb things.

the same could be said of every member of the cast, as Hansel and Gretel’s script isn’t it’s strong point; instead, the film has to rely on its fast pace, irreverent humor, and bloody action to carry it, and if those are things you can enjoy, it delivers. But if you’re looking for any more than that (and why the heck

would you from a movie called Hansel and Gretel: Witch Hunters?), you’re outta luck.

Of course, a somewhat troublesome aspect of Hansel and Gretel’s plot involves the fact that they’re hunting witches, and as a result, a ton of women meet their violent demise at the hands of the duo. I can certainly see how some people are bothered by all the violence perpetrated almost exclusively against women in this movie, especially since there IS such a thing as MALE witches (AKA warlocks)…maybe it wouldn’t have hurt to have included a few of them to the narrative as well to even things out in terms of bloodletting?

Otherwise, Hansel and Gretel: Witch Hunters is a stupid but enjoyable movie that you shouldn’t take too seriously; if you’ve bought a ticket expecting great cinema, you obviously don’t have any idea what great cinema is. But consider seeing Hansel and Gretel if you enjoy a mix of Gothic mega-violence, dark humor, and wanton stupidity. You won’t walk out of the theater any smarter (perhaps less so, in fact), but you’ll probably have had a good time nonetheless.