(Long Island, N.Y.) FINALLY. A movie where a woman beating the living crap out of a man is actually 100% believable! I’ve been waiting years for this. If you’ve been reading my reviews for a while, you’ve probably noticed that I usually tend to be a tad on the harsh side when reviewing action movies featuring women as the lead character. No, it’s not any latent (or overt) misogyny on my part…it’s just that I can’t buy it when a bone-thin supermodel effortless destroys men in one-on-one unarmed combat who outweigh them by 100 pounds or more. It doesn’t help that these ridiculous scenes are usually accompanied by frenzied camera work and three-cuts-per-second editing to make our pretty little darling actually look like she can fight like a killer after having only taken two weeks of movie-fu training.

Today’s generation of “tough chicks” really just make me want to throw up my arms and storm out of the theater. It maddens me that Hollywood is obsessed with looks over talent, abilities, and toughness when it comes to actresses these days. As an actress, unless you’re young and attractive (or Meryl Streep), you sadly won’t get work in movies unless you’re playing something mundane like a soccer mom or a nun.

Meanwhile, guys have never had that problem…especially when it comes to action movies. Charles Bronson, rest his soul, was one of the most prolific ass-kickers on the planet back in his day, but damn, he was an ugly man. However, no one cared, because he took care of business. You’ll never see a female Bronson equivalent in a film, now or ever. Hell, when Hollywood needs an ugly woman for a role, they don’t go out and scour the Earth for an ugly actress…they find a HOT actress and MAKE her ugly. Charlize Theron, considered by many as one of the most beautiful women on the planet, transformed herself into a fat and nasty hambeast when she played serial killer Aileen Wuornos in 2003’s Monster. And she got an Oscar for it, no less.

Enter Gina Carano, women’s MMA star (and a former American Gladiator) with legit in-ring fighting skills, and when I heard that she was going to be the star of an action movie directed by Steven Soderbergh (who helmed such great flicks as The Limey with the godly Terrance “Zod” Stamp), I stood up and took notice. I mean, here was what I had been looking for all this time…a woman who’s legitimately tough; an expert in Muay Thai and other destructive fighting arts, Carano is muscular and strong-looking while still retaining both looks and femininity, which is the only reason she got an action movie to star in. I mean, let’s face it- if Carano was a dog, it wouldn’t matter how good she was in the ring…casting directors wouldn’t give her a second glance, unfortunately. 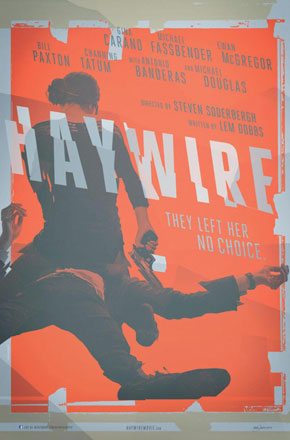 But in the end, it doesn’t matter how she looks…what matters is how she HITS. And man, can Carano hit hard. Delicate, stick-figure “action stars” such as Zoe Salanda and Mila Jovovich…please take notes.

Oh yeah, I’m reviewing a movie here…let’s get on with it. Haywire is an action flick that unfolds in the usual Soderbergh non-linear style about a member of a covert operations group employed by the American government named Mallory Kane (Carano), who is set up on a

job for a murder she didn’t commit. Soon it seems that every authority on Earth is after Mallory, who sets out in true 1980’s Action style to discover who betrayed her…discover them, and make them pay. And to that end, she kicks the asses of every man foolish enough to get in her way.

course, there’s more to the plot than that, but that’s all you really need to know for now. Let’s get into what makes Haywire work so well, not only as an action flick, but as a movie.

Of course, the first thing that jumps out at you is the cast. In addition to Carano, there are appearances by Michael Fassbender, Ewan McGregor, Bill Paxton, Channing Tatum, Antonio Banderas, and Michael Douglas. And none of these are cameos…they’re all actually full roles. How Soderbergh got all these guys to star as supporting players in a movie that is essentially just a star vehicle for Carano, I’ll never know, but each of these esteemed actors turns in an impressive performance (even Tatum, who’s the least wooden here that I’ve ever seen him…he’s still a horrible actor, however). Haywire is truly an ensemble film, and worth seeing for the novelty of its cast alone.

As far as plots go, Haywire again sets the bar higher than your average action movie. Yes, the basic outline is that of a simple revenge story, but what takes us from Point A to Point B is another story. There are plenty of political cloak and dagger happenings going on behind the scenes to keep you guessing, and the story being told out-of-sequence also helps to keep the audience on its toes.

Then, there’s Gina Carano. Let’s just cut to the chase and talk about her fight scenes, shall we? First of all, there are no shaky cameras, no fast edits. Each time Carano pounds some lowlife to a pulp, each and every visceral blow is all clear and easy to see. Carano’s MMA training is put to good use, as she uses brutal, real-life combat moves (often utilizing the environment) to take on her opponents. And unlike other Hollywood action females who are automatically allowed to slaughter their foes easily and without getting a scratch, Carano usually walks away from her confrontations battered and bruised. Yes, she eats quite a few punches here (it’s still somewhat disturbing to see a woman getting punched in the face in a movie), but the thing is that she takes those punches and just keeps coming. She’s presented as being on an even level with the men she confronts, which makes Haywire’s fight scenes quite effective at getting you involved.

Of annoyance to me is the fact that some reviewers have been taking Carano to task for her acting abilities. No, she’s by no means amazing or anything, but I will say that she is 100% solid and believable in her role as a bad-ass chick out for revenge, and if she was played by a man, I guarantee that her acting wouldn’t even be an issue. After all, did anyone care if the mighty Arnold himself could act? Sly? Van Damme? Seagal? Of course not! I think most of the critical whining is, again, due to Carano’s gender- the reviewers probably took off points because she didn’t start sobbing into the arms of some guy when things got tough. You know, ’cause that’s what chicks do in movies.

Personally, I was very impressed by Haywire…and these days, it’s rare for me to walk into a movie with certain expectations and to have those expectations so perfectly met. Haywire was exactly what I needed, and exactly what I wanted it to be: a well-made movie with a complex plot, an excellent “who’s who” of a supporting cast, great fight scenes, and an impressive new female action star in Gina Carano, who I hope to see more of in the near future. Highly recommended.