LONG ISLAND, NY – Kevin C. Fitzpatrick was born January 10, 1966 and is an American historian and non-fiction writer. He is best known for his research and writings on Writer Dorothy Parker and his latest book “The Algonquin Round Table New York Historical Guide” from Lyons Press which was recently published on January 6, 2015.

The Algonquin Round Table was a celebrated group of Manhattan writers, critics, actors and wits. Dorothy Parker and her entourage of literary giants met initially as part of a practical joke, members of “The Vicious Circle”, as they dubbed themselves, met for lunch each day at the Alqonquin Hotell from 1919 until roughly 1929. At these luncheons they engaged in wisecracks, wordplay and witticisms that, through the newspaper columns of Round Table members were disseminated across the country.

On Tuesday, June 23rd 2015, Mr. Fitzpatrick sat down with me at the Historical Algonquin hotel and discussed the history of the Algonquin Hotel and his latest publication. 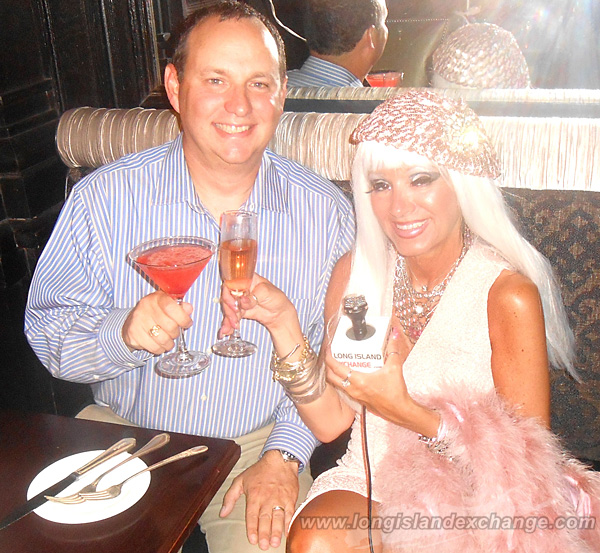 Hello darlings, I am Cognac Wellerlane and I am here at the historical Algonquin Hotel and I am here with Mr. Kevin C. Fitzpatrick who is a famous author and he recently published a book about the Algonquin Round Table.

And it is all about the fabulous people of the day like Ms. Dorothy Parker who was a famous poet, she was also a critic.

And she frequented this hotel and it is haunted with her entourage of famous writers, poets, and just famous people of the day. I am here with Kevin Fitzpatrick and he is going to talk about this book.

Kevin: Thank you for having me on.

Kevin: Well the book is called “The Algonquin Round Table New York Historical Guide” from Lyons Press and it’s about thirty members of the Vicious Circle that met right where you are sitting in 1919.

What fascinated you about this hotel and the people that came to this hotel to write the book.

Kevin: I am a fan of the Algonquin just as someone would be a fan of Yankee Stadium because I know the greats were here. This was ground zero for amazing writers, producers, actors, Broadway publicists and what not that came in here about ten years and to this day it still a literary landmark.

Kevin: Wow! That’s incredible! Well you have a lot of other things in common too! She also spent a lot of time in Long Island…a lot of time in Broadway theaters and she liked a good time as well!

Why did she love this hotel so much? What was so special about the Algonquin Hotel.

Kevin: It’s very close to everything that was important to her. Her job was nearby, the theaters that she worked as a critic were nearby, her offices were nearby….she lived on the upper west side, that’s where she grew up. She would take the train. It was very easy to get here because it was near Times Square. It was a very centrally located place and the speakeasies were close by too.

Kevin: They were on 49th Street where Rockefeller Center is today. The speakeasies were on 49th between 5th and 6th Avenues.

But strangely and sadly enough as famous as she was she did not make a lot of money doing what she did. Isn’t that true?

Kevin: No she didn’t.

Journalist don’t. I don’t make a lot of money either. People think that because I look so glamorous all the time.

Kevin: Well she made money in the 30’s and 40’s when she was working in Hollywood but she spent it as quickly as she made it. She like to say “Hollywood money isn’t money. It’s congealed snow, melts in your hand, and there you are.”

Oh my God. I would say that myself! Sometimes I wonder those numbers do they mean something? 67, 57, June 7th… I don’t know it’s a little psychic don’t you think?

Kevin: A funny thing about the end of her life is her very good friends were Gloria Vanderbilt and Wyatt Cooper.

Kevin: They were very important to her. She met Wyatt Cooper in California when he was working as a writer. He moved back to New York in the 60’s with Vanderbilt and they really took her under their wing. They were very important to her and Gloria Vanderbilt in particular. When Dorothy Parker died, the reason Gloria couldn’t go to her memorial service was because she just had baby and the baby was Anderson Cooper.

Oh my God what a fascinating story.

Fitzpatrick has had a varied multimedia career including newspapers, television, advertising agencies, magazines, and more recently web-based publishing and editing. Prior to writing books he has produced close to seventy-five websites and written for many trade publications. When not involved with media pursuits, Fitzpatrick is a certified New York City sightseeing guide. His other profession is giving walking tours of historic locations, landmarks, cemeteries and drinking establishments. Mr. Fitzpatrick is also a frequent guest speaker at libraries and literary clubs.

Fitzpatrick was inspired by such great writers including: Dorothy Parker, Robert Benchley, Franklin P. Adams, and Stanley Walker. Fitzpatrick produces the award-winning dorothyparker.com, which he launched in 1998. He is the president of the Dorothy Parker Society which he established in 1999. He was also instrumental in the effort to get Dorothy Parker’s birthplace in Long Branch, New Jersey named a National Literary Landmark by Friends of Libraries USA. Fitzpatrick was also behind the creation of a bronze memorial plaque that was unveiled in August 2005 in Parker’s hometown. In conjunction with the Algonquin Hotel, Fitzpatrick leads walking tours of the former Algonquin Round Table homes and haunts in Manhattan. In 2009 Fitzpatrick established Donald Books, a small independent publishing company.

For more about this fascinating writer please visit http://www.fitzpatrickauthor.com