(Long Island, N. Y.) Identity Thief is a terrible new comedy starring Jason Bateman and Melissa McCarthy. What, I have to write more? But it’s bad enough that I had to watch this movie…I have to relive the rotten experience by writing about it? You mean, it’s my job? Well…okay. Fine.

Jason Bateman. He’s the guy, more than any other Hollywood actor working today, that has typecast himself into a very narrow niche- playing the nice, square, white guy. He plays it in EVERY movie he makes, over and over. The man has no range, at least none that he’s ever displayed or that I’m aware of, and while it’s paying him dividends currently, I’m sure he’ll wear out his welcome sooner or later. It happens to all one-note actors sooner or later.

In the meantime, I get to review him in tripe like “Identity Thief.” It’s a film starring Bateman as Financial bureaucrat Sandy Patterson, a guy who has had his identity stolen by a con-woman named Diana (McCarthy), who has been using his alias to rack up an impressive amount of retail purchases and petty crimes. Patterson becomes aware of the besmirching of his good name when his credit card gets declined at the gas pump; this is followed up by an arrest for missing a mysterious court date in Orlando, Florida, where he has never been. 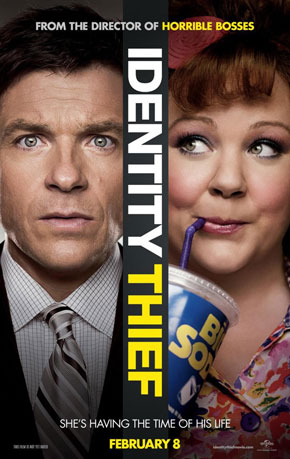 With Patterson’s job on the line, he heads to Florida to track down Diana with the intention of bringing her back to clear his name. It’s odd that he should need to do that, however, as ID theft is quite commonplace these days and actually rather easy to establish and fix, isn’t it? Well, that little fact doesn’t deter Patterson at all, and once he finally gets a hold of Diana, the duo start a road trip back to Denver; unfortunately, in addition to Diana being a fairly unpleasant traveling companion, Patterson also has to contend with criminals who are also after Diana for conning them…except their solution to the problem is a tad more *ahem* permanent than the one Patterson has in mind for her.

Identity Thief, directed by Seth Gordon, is not funny. At all. The fact that it made major bank at the box office on its opening weekend I feel has

more to do with its currently “hot” star than its merits as a comedy or even it’s rather lackluster marketing campaign. Jason Bateman is a nice, safe actor for middle-class

American families to go and see handle whatever problem gets thrown at him. To me, however, he gives me the occasional smile and even a rare guffaw, but otherwise he’s as bland as they come. Still, you can’t blame the guy for sticking to what works…there are thousands of people struggling for their big break, and I guess if you find something that gets you parts in films on a regular basis, why mess with it? Jim Carrey tried to expand his range and look at him now. Where, you might ask? Exactly.

It doesn’t help that the material he’s forced to work with here is completely uninspired and just lacking in any legitimate humor. Melissa McCarthy kind of upstages Bateman because her character is more loud and over-the-top, but it’s more the film’s mediocrity that sustains her performance than her role functioning as a tentpole, so to speak. In reality, nothing in this film is worthy of praise, except maybe

the addition of Jon Favreau, who usually is a minor boon to any picture he’s in when he’s not busy directing. Too bad he’s only in this movie for five minutes.

So, Identity Thief is not bad, per se…it’s just boring. I’d prefer it to be bad, actually, as it would probably be more entertaining and at least open the doors to unintentional humor; the pain of ennui is far worse, my friends.