(Long Island, N.Y.) With the success of the recent Clash of the Titans remake, it was a sure bet that another over-the-top sword-and-sandal movie dealing with Greek Mythology was going to come out sooner rather than later, and here we have Immortals, which is basically Zach Snyder’s 300, only with the gods of

Let’s just jump right into the plot…we’ll get to my critiques soon enough. The supposedly epic story of Immortals involves Hyperion (Mickey Rourke), the King of Crete who gets pissed that the gods didn’t save his family from dying of some disease or whatever. So, he does what any rational person does; he declares war on Mount Olympus, and to that end he seeks out a magical bow that

he can use to release the mythical Titans, who in turn will hopefully stomp the gods like cockroaches. Or so Hyperion hopes.

Of course, we need a human hero, so we get one in the form of Theseus (Henry Cavill, the Brit

who will be playing Superman in the upcoming Man of Steel), whose village is destroyed by our pal Hyperion as he searches for his bow. Thus, Theseus, who is actually the son of a god and a human woman and trained by Zeus (Luke Evans) himself in combat, begins his quest of bloody vengeance against Hyperion, and along the way does battle with all manner of creatures from the ancient Greek bestiary, including the fabled Minotaur. Eventually, it all ends up in a slam-bang battle royale as gods, Titans, and plain ol’ humans all duke it out in a crazy ending battle that almost makes it worth sitting through the first 2/3rds of what is otherwise a total bore of a movie. 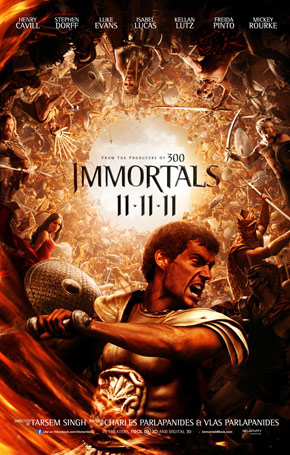 Oh, wait, with a plot description like that, you thought Immortals would be entertaining? No such luck, I’m afraid. The problem is that, despite looking really, really, pretty, Immortals is nonetheless a total snooze-fest…well, at least until that ending. Damn, what an ending. The only thing that could have made that ending even better was if we cared at all about the characters, but as it is everyone involved is a vapid, soulless construct of a Hollywood script writer who was more concerned about getting to the next big CG set piece than

giving his leads likable or memorable personalities, or by telling his story with a brisk or interesting pace. But you can say that about almost any movie these days.

But, if you like special effects and beautiful (although very phony-looking) CG sets and locations, director Tarsem Singh has a treat in store for you. Doing his best to steal every single visual gimmick of Zach Snyder (especially his penchant for excessive slow motion fighting), Singh, whom I’ve never heard of before, makes millions of dollars of computer graphics take the front seat over his actors, which is a shame; Henry Cavill is a solid talent, and co-stars Mickey Rourke, Stephen Dorff, Luke Evans, and John Hurt all do their best with rather stunted roles. But if all you care about

And I guess there’s nothing wrong with that…is there?

So, Hollywood has churned out yet another flashy flick with the depth of a rain puddle. But hey, that ending is pretty much worth the price of admission, so what the heck. After all, Immortals is really no worse than anything else that’s out in theaters right now, and by default it’s loads better than the new Adam Sandler stinker Jack and Jill. Of course, that’s not saying much, but the general public keeps setting the bar as low as it is by constantly turning out to support lackluster films like this, so they must be happy with the film industry’s current state. Gee…now I’m depressed.